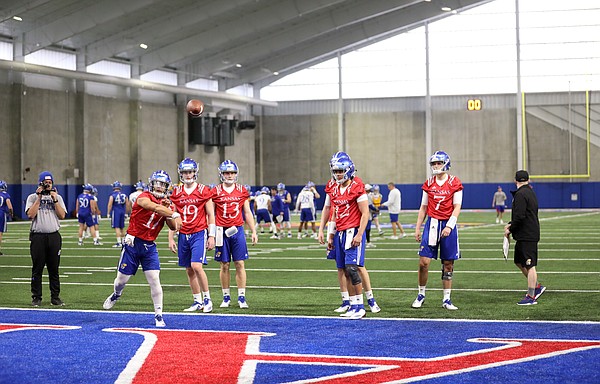 If any team knows not to overlook an FCS foe, it is the Kansas football program.

With the 2019 season opener a little over a week away, there is still so much uncertainty about both Kansas and Indiana State. The two teams will square off at 11 a.m. on Aug. 31 at David Booth Kansas Memorial Stadium.

The expectation is that the Jayhawks will be able to handle things, even though they are just a 3.5-point favorite on some online sportsbooks. Make no mistake, though, Indiana State is not a pushover.

On Monday, BetOnline.ag released their preseason odds to win the 2019 FCS national title. Indiana State was +3300 to win it all, which was only lower odds than 11 other FCS teams. Northern Iowa, Wofford, Towson, Kennesaw State, Colgate and McNeese State all have the same odds as the Sycamores.

For even more context, look no further than the team that the Jayhawks lost to in the season opener just last year. Nicholls, which defeated KU in overtime in Week 1 last season, is +2800 to win the national title this fall. Nicholls will take on Kansas State to begin the 2019 campaign.

The odds reflect where both Indiana State and Nicholls stand in the FCS preseason coaches top-25, which was also released on Monday. Nicholls is ranked No. 11, while Indiana State comes in at No. 16.

It is not completely identical, however. North Dakota State, which received 23 first-place votes in the coaches poll, has the second-best odds at +250 to win it all. James Madison received one vote and is ranked No. 2, but is +200 to be the last team standing in the FCS.

Both the ranking in the preseason poll and the national title odds indicate that the Sycamores are on the rise in the FCS landscape after going 0-11 just two years ago. The Sycamores were left out of last year’s playoff bracket with a 7-4 record, but return nine starters on offense and six starters on defense.

As a result, the Jayhawks better come prepared or the Les Miles era could start off on the wrong foot.

I wonder where KU would stand in that poll. I guess we'll find out in a few days.

Hopefully Les has the team ready to punch Indiana State in the mouth instead of trying to hold their hands like that other coach did with Nicholls.

The Rumor in Terre Haute (The Home Town of the Late Great Clyde L.) is that Larry Bird will be starting at Tight End? Let's Win and Dedicate it to Clyde! Rock Chalk!

The passing combo of Boyle to Bird!