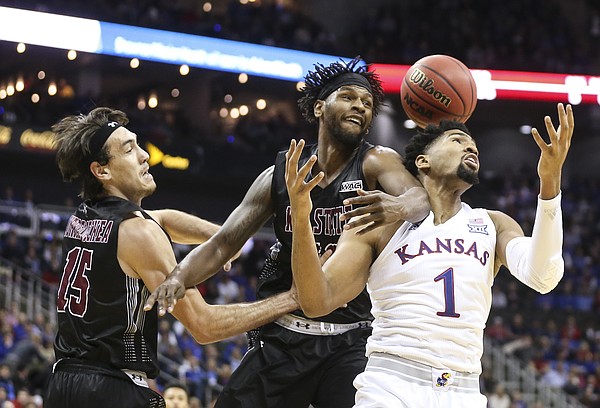 No. 1 Kansas (8-0) isn’t fooling any opponents when starting center Udoka Azubuike is out.

The offense will run through redshirt junior forward Dedric Lawson, who is averaging a team-high 19.1 points per game for the unbeaten Jayhawks. Lawson has been the focal point when Azubuike is on the bench, but that was even more evident in the first full game without the big man.

“Without (Azubuike) being there, I don't know if you watched us play, but we try to throw the ball to him every time,” Kansas coach Bill Self said. “When (Azubuike) is not in the game we try to play through Dedric on almost every possession.”

In KU’s 63-60 victory over New Mexico State last weekend, Lawson scored the final 14 points of the game to help his team avoid an upset in the Sprint Center. It marked the first full game without Azubuike, who sustained an ankle injury against Wofford and is out indefinitely.

Prior to Lawson’s takeover stretch in crunch time, however, he had just six points. In fact, Lawson scored two points on six shots in the first half.

“I just need to come out and be aggressive, that’s all it takes,” Lawson said.

That all changed with 6:40 left in the game, when KU called an inbounds play called “five-side” for Lawson, who ended up with a bucket on a hook shot.

“I would say a lot of it is on him, but you know guys can certainly be better passers and guys can do some different things,” Self said. “We try to dissect things and make it more complicated than what it is. But, yeah, he needs to be more aggressive."

Lawson will certainly get his opportunity, as the offense revolves around him at the five going forward.

In the win over New Mexico State, Lawson posted an usage rate of 32.48. Usage rate, or as it is also commonly referred to “usage percentage”, is defined as an estimate of the percentage of team plays used by a player while he was on the floor. It is basically the number of plays used for a specific player.

For the season, Lawson has posted a 29.9 usage percentage. For reference, Thomas Robinson posted a 30.0 usage rate in 39 games during the 2011-12 season. Robinson’s mark remains the highest usage rate by a Jayhawk (minimum 14 games) since college basketball reference started tracking it in 2009.

It is easy to see why the offense would run through Lawson, particularly when Azubuike is sidelined. Lawson already has five double-doubles on the season, which leads the Big 12. He’s also second on Ken Pomeroy's Player of the Year rankings.

And the numbers could become even more absurd, if Lawson is able to have the right mindset from the opening tip. In Lawson’s mind, this weekend is the perfect time to do so. Kansas welcomes defending national champion Villanova in a rematch of last year’s Final Four at 11 a.m. Saturday.

“This is a game people dream for, especially me growing up as a kid,” Lawson said. “Kansas and Villanova on a Saturday morning when everybody is going to be watching.”

So, what if Lawson got fouled out? Who will the offense go through? I can imagine Paschall overpower Lawson in the post. We already know how quick & good Nova players are, I hope to see some good counter punches from lessons learned the past few meetings with them. I wish Graham was still here with us.