Ballot breakdown: Why one voter chose to not rank No. 1 Kansas in latest AP poll 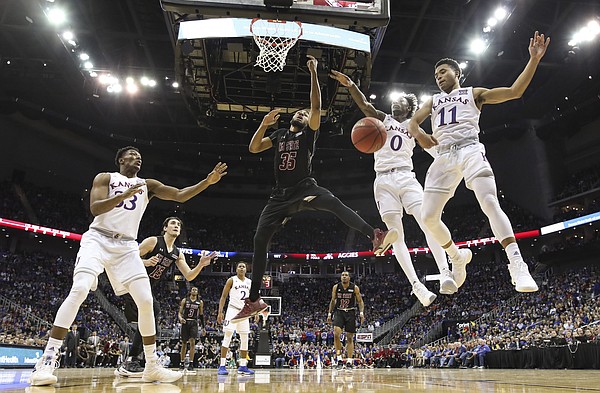 Kansas players Marcus Garrett (0) and Devon Dotson (11) slap the ball out of the hands of New Mexico State forward Johnny McCants (35) during the first half on Saturday, Dec. 8, 2018 at Sprint Center. At left is Kansas forward David McCormack (33). by Nick Krug

It would be too easy to claim that the weekly poll by the Associated Press does not matter.

The college basketball season is a marathon, not a sprint. Being No. 1 now means absolutely nothing, and the goal is to be the team cutting down the nets in April. Or, at the very least, be closer to No. 1 come March.

Yet, in my opinion, Seth Davis of the Athletic hit it on the head in today’s column when he said that this poll does matter. It can give a program like Furman some attention from the casual fan. Most of all, though, it gets people talking about college basketball.

The latest poll, which was released Monday, revealed that unbeaten Kansas is back at No. 1 with 57 of the 65 first-place votes. Fans can say they don’t care about the polls, but there were a large collection of fans upset about KU falling from its No. 1 preseason ranking without losing.

And fans have every right to care about these polls. In fact, it is very good for the sport of college basketball.

With that being said, I’ll try to write a weekly blog after each updated poll with some notable takeaways. Most of them will be KU-related, but I will certainly mix in some notes on Big 12 teams and other prominent programs when relevant.

Kansas unranked on one ballot

I’ll try to avoid attacking AP voters on their ballots, because Gary Parrish already does a great job of that over at CBS every week.

Still, it is important to start this blog with Graham Couch’s poll, because it was the most outlandish ranking of KU all season. Prior to this week, Couch had been the low voter on the Jayhawks all year. He never listed Kansas higher than No. 3 in any poll, ranking the team No. 5 last week.

Couch’s reasoning, according to his column at the Lansing State Journal, is that he is downgrading teams for not playing true road games. He also removed Duke, Tennessee, Auburn, Texas Tech, Kentucky, Villanova and Texas from his top 25 for that same reason.

Here’s a snippet of his column: “In no other sport is the home court worth so much to momentum, to confidence. In no other sport does a road team, so smooth and high a few nights earlier in its own building, so often look like a befuddled, haphazard mess. The contrast between home and road in college hoops is so severe, to not play on the road is to take advantage of a system that creates the appearance of a larger chasm than really exists between the haves and have-nots.”

I have to give him credit, at least he's consistent. Couch claims he’d have no problem putting any teams back in the top 25 after their respective first true road games.

There is certainly some logic to valuing true road games, and not rewarding teams for just playing at home all the time. However, by nearly every metric, KU has played a rather difficult slate thus far. In fact, only 13 teams are ranked higher on KenPom’s adjusted strength of schedule.

Furthermore, this isn’t the first time Couch has been unreasonably low on the Jayhawks. In January of 2017, Parrish called him out in the poll attacks column for ranking KU 10 spots lower than anyone else.

Another reason why Couch’s poll doesn’t make sense is that it completely gets away from the point of these polls. These are supposed to be weekly power rankings, and fans want to know where their program stands among the college basketball landscape.

Every year since 2004, the eventual national champion has been ranked no lower than No. 12 in that season’s week six AP poll.

This would seem to debunk the myth that polls don’t matter, seeing as college basketball writers have a good idea by now. It also bodes well for the Jayhawks, who are at the top of that list without playing their best basketball yet.

Sticking with Jayhawks at No. 1

KU fans were rightfully miffed when the preseason No. 1 team was leapfrogged on two different occasions without losing a game.

The Jayhawks were bumped down to No. 2 in the first poll of the regular season following their 92-87 win over Michigan State in the first game of the Champions Classic. Gonzaga then propelled to No. 1 after its win over Duke in the Maui Classic, which occurred the same weekend that KU earned a win over Tennessee.

It is worth mentioning, though, that three AP voters have listed Kansas at No. 1 in every single poll, including the preseason poll. Carlos Silva of the Lubbock Avalanche-Journal, Edgar Thompson of the Orlando Sentinel and Marcus Fuller of the Star Tribune have all kept the Jayhawks at the top spot.

Even Dick Vitale listed KU at No. 2 last week, despite claiming the No. 1 team shouldn’t fall without losing following the Champions Classic this year.

I voted ⁦@KUHoops⁩ # 1 / to me when u r sitting in # 1 slot u must get beat for u to lose ur standing / heck all they did was beat a top 10 team on a neutral in ⁦@MSU_Basketball⁩ but that wasn’t good enough via @ESPN App https://t.co/bcGzisQkwV

I'll confess that I don't know where exactly Kansas or Duke should be ranked. But if someone were to ask me who I thought would win on a neutral court I'd pick Duke. In fact, I'd pick Duke if they were playing either in Cameron Indoor or AFH. All this means is that I'm not a Homer. It probably also means that realism is a greater priority for me in deciding who is number 1 than either my personal fanhood (which I assure you is intact) or a week-to-week record analysis. Look. Duke is the better team right NOW, despite the results of any poll released today. Forget the justification: Kansas beat Tennessee, Tennessee beat Gonzaga, Gonzaga beat Duke. While all of this is true, it does NOT mean Kansas would beat Duke in a heads-up game. Stop it! No, it doesn't.

Again, I've said this and it's alluded to in this article: it doesn't matter what the rankings are right now. At this point in the season they're simply a beauty contest. Nothing more. The wins against opponents weigh heavily, but the ranking doesn't. Our team still has some developing to do, and they will develop, prior to the Tournament. Relax!

Let's be honest -- KU isn't exactly playing like a #1 team. They easily could have 3 or 4 losses this season.

However, I haven't seen any other team that looks like a #1 team this season. Duke gets all the hype but that's a flawed team. So is Gonzaga, Virginia, Tennessee, etc.

Once conference play starts, I think we'll see the top teams start to separate themselves a little bit. That's what usually happens.

Keep an eye on Buffalo. That team is undefeated (9-0) and could end up being the Loyola-Chicago of 2019 March madness

Rankings shouldn't even exist until January. That being said, a case could be made for a handful of teams to have the #1 spot right now. Honestly, we haven't played like the #1 team in the country as of late. Who is the best team, I don't know..... but we've got 3 months until we find out. Right now, I'll take the imaginary crown...... RCJH!

Great response Joe. Those of us that are Jayhawk fans certainly want them to win. Which they have done each game so far. Opinion polls are not totally accurate. People have different opinions. Some times the best team doesn't win. And polls in the future will change. So I'm thinking our Jayhawks need to improve to maintain top ratings. Lets hope they do.

The preseason poll is based on roster potential and previous results, not much more. After that it’s mostly about continuing to win. It’s good to know your team has potential and it’s good to keep winning. But it doesn’t mean much yet. Right now there is way more potential than performance.

I don't want to hear any of that duke hype. They are just a three man team with zero bench production. The Army stuck with them until the last four minutes of the game, so does the AP make them a Top 25 team? The AP'ers are just speaking on opinion and probably never played Varsity Hoop for anybody and thinking that playing at the YMCA on weekends; somehow qualifies them. Any decent shooting team that forces duke to shoot from outside, minimize transition points and has a quality bench can beat duke. So please quit adding to the unnecessary hype, because that is all it is. And you should never put a mid-major over a power 5 Conference in such questions or rankings in the top 5. Never Have a great evening and RCJ!!!!

If KU beats Villanova (yes, at home) without Dok, it would be ridiculous to drop them in the polls.