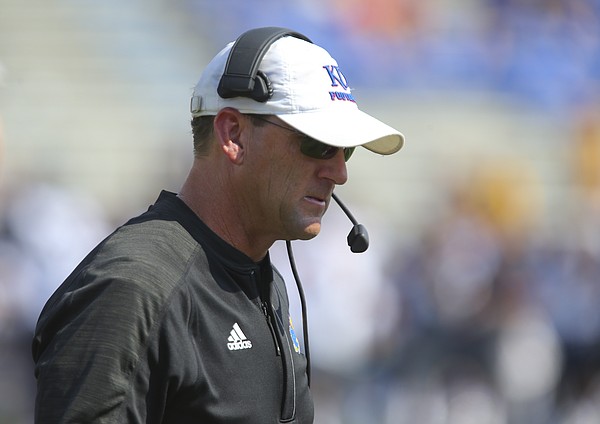 Kansas head coach David Beaty shows his frustration after a West Virginia touchdown during the fourth quarter on Saturday, Sept. 23, 2017 at Memorial Stadium. by Nick Krug

Earlier this week, Journal-World sports editor Tom Keegan officially made his win/loss prediction for the 2018 Kansas football team, picking the Jayhawks to finish David Beaty's fourth season with a 3-9 record. Clearly, that's not the only possibility for the Jayhawks, who, with a veteran group mixed with some new faces, could finish with more or certainly even fewer victories than the three Keegan's predicting. That's where the rest of us come in. Over the next three days we'll look at three more possible win totals for the 2018 Kansas football team, which opens the regular season at 6 p.m. Saturday night at home against Nicholls.

The case for 0 or 1 win for the University of Kansas football team during the 2018 season can be best made by using historical evidence.

Since David Beaty took over as head coach, the Jayhawks have gone 3-33 over the course of three years. In that time they have defeated just one FBS opponent and even lost to an FCS foe in Beaty’s debut.

That recent track record tells us that it will be tough to expect Kansas to beat an FBS team in 2018. Nicholls State, which is ranked No. 17 in the FCS preseason poll, is no cakewalk in the season opener, either. In fact, Nicholls State was tied with Texas A&M in the fourth quarter when the two teams met last year.

Kansas also lost every conference game in 2017 by an average of 32 points per game. The program still hasn’t won a road contest since Sept. 12, 2009, a streak that now spans 46 consecutive road losses.

All of this would indicate that it will be difficult for the Jayhawks to make a monumental leap this fall. The season opener will be tougher than expected, the Big 12 schedule will be daunting once again and any road contest will prove to be a tall task.

On paper, Kansas has an improved team with several returning starters and an exciting group of newcomers.

In addition, Kansas has just one other game with a win probability higher than 28 percent, and that is against Rutgers (44 percent) in the final game of nonconference play.

The schedule doesn’t bode well for the Jayhawks to win more than three games for the first time since 2009. Since then, they also have only won three games in just three of those years. And finding a second win isn’t even a lock for a team currently on an 11-game losing streak.

Because of all that, I find it hard to predict more than one win for the 2018 season.

Im kinda hoping they start off horrible just so that Beaty can get fired..no reason why KU is still THIS horrible after 2 season..I watched as Bill Snyder took a horrible KSU team and win 5+ games in year 3..Ive seen other coaches step into horrid situations and STILL improve after 2 seasons...

(Craig & any others) If you thought any coach could have come in and had a winning season in the past three years your off base and not paying attention. Beaty's first year he had 60 walk-ons which resulted in the regular roster being filled with them. Our current Junior and Sophomore classes are are the classes to build upon. Totally unrelated to how good or bad of a coach Beaty is, KU is finally to a point that the talent level is there and the players are old enough, strong enough, and have the bone density to compete and a majority of them have two years including this year to play.IMO, if Beatty has a decent year.....3-4 wins, we should consider keeping him one more year and let this thing play out. Stop firing coaches after just three years, let the roster fill up even further.

So you think in his fourth year as coach his expectation is to only win 3-4 games, when he said he would win 6 last year? Why are you lowering his bar? Has he performed so poorly that you don't have any expectations for him?

@Brian..I didnt say winning season, but they have shown zero improvement in any area and he has won a total of 3 games in 3 seasons.NO EXCUSE FOR THAT!!! I dont care how many walk ons he had...he hasnt brought any type of stability

One thing Snyder had in his favor was that he played four non-conference games every year and all he played was Dolly Madison U and its sisters. With that said, we are NOT where we should be. Playing revolving coaches every 3 years hurts.

We have the softest non-conference schedule.

Snyder may have had an easy nonconference schedule but he went from 8th to 6th to 4th in the Big 8 with records of 0-7, 2-5, 4-3. Remember, too, that Snyder's second tenure is because KSU fired Ron Prince with three games remaining in his third season, effective at the end of the season.

Stop using the "revolving door" in the coaches office as an excuse to keep a bad coach. Keeping a bad coach is not the solution to the revolving door problem. The solution to that...make better hiring decisions in the first place. Hopefully we have the correct AD in place now that the KU football program and start moving out of this hole...with or without Beaty.

to me, the stat that is even worse (if that is possible) than Beaty's 3-33 record is that margin of loss in last year's conference play. Losing by an average of 32 points is out of this world. no one is that bad. that shows a complete lack of competitiveness. I think the case for one win is stronger than for 3. Hope I am wrong, but there is really no pretty way to paint this picture.

exactly..i cant recall a single conference game where they didnt get demolished..a truly good coach can take spare parts and at least improve them..but when the fan base has to pray that they get a win against one of the FCS schools in the first 3 weeks because they KNOW that they have no other winnable games and risk going winless on the year, thats an issue. The fan base has as little expectation in year 3 as they had in year 1...that also is an issue. A good coach brings buzz to the fan base..I feel no excitement with Beaty and dont expect him to lead KU to any real wins...IMO, I give him 4 games..if he isnt at least 2-2, he should be fired

If Kansas doesn't win a single game on it's conference schedule (VERY possible, perhaps even probable), then it must lose 2 of its 3 non-conference games to achieve a 1-win season.

How likely is that? I'm not sure I totally buy into the exact numbers presented in the article, but I do agree that Nichols State and Central Michigan are its best chances for a win. Envisioning the scenario that they lose the Rutgers game (entirely within feasibility), then one need only imagine a split between NS and CM.

All the reasoning in this article is valid and it will therefore NOT be a surprise if we go 1-whatever.

But games aren't reasoned to wins and losses, and therein lies the hope for Kansas. Kansas can CHOOSE to play harder. The decision making in games is still inside of the players' control. Playing with passion and pride counts for a lot. Clint Bowen inspired a down football team who played better than they had played previously in the season, though the losses still added up. Maybe these Kansas players will play with a kind of pride we haven't seen them play with in several years, which means you can't use previous seasons' records to predict their finish this year as accurately. In fact, if anyone chooses Kansas to win even 3 games or more, they have to base their projection both on reason AND intangibles outside of it.

In the world of sports, sometimes poor teams perform better than expected. It has been known to happen. And it has happened before at Kansas.

There will be more information after Saturday!

I admire your positivity, but I'll hold my breathe on them playing harder..if getting embarrassed game in and game out hasnt motivated them the last 3 years, I highly they will suddenly do it in year 4

Instead of despairing over the fact that KU is going to suck again this year, why not do what I have decided to do and find another team to cheer for, one that can actually do something meaningful? U of I is projected to win at least eight games this season, with one CBS expert suggesting the Hawkeyes could win as many as ten. Come cheer for Iowa. You'll be happier for it, trust me. 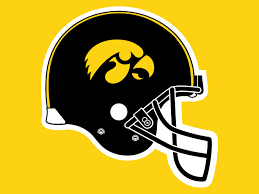 Okay, well, if you want to waste your autumn on a bad football program, I can't stop you. I feel sorry for you, really.

See you when basketball season rolls around.

Traitorous words don't impact me. You can hoard your sorrow for yourself. Go on. Feel free to be completely selfish with it.

While you're at it, don't even waste your time being a basketball fan. If your loyalty depends solely upon a team's doing well, you might turn out to be a turncoat for even KU basketball someday. Miss me with that non-sense.

At least you own your fair weather fanhood. It has a silver lining, though. We won't be treated by you to any ridiculous comments with respect to football. In fact, why even comment NOW?

Why comment now? Partly because I am entertained by your outrage over my choice to cheer for a different team. Not only am I winning by cheering for a team that will actually be decent at the very least, I've won by getting under your skin.

If I want to cheer for Iowa in football and Kansas in basketball, I will. I am not asking your permission on who to cheer for in what sport. It's my life. And I'm going to live my life the way I want, and you can go back to living your miserable life the way you want.

I have a personal challenge for Jackson, Keegan, Smith, Tait (if he still cares about football) and any other KUsports.com staffer I may have missed.

Write a column identifying a real head coach at this level who you feel that Beaty has out performed on the field. Ideally someone who has coached in the last 40 years (finding some obscure coach from the 1920's would be kind of lame), and make a case for how KU fans should be thankful they have Beaty over the other coach. Please make it based upon on the field production. It would be going against the spirit of the challenge to say that you would want Beaty over someone like Art Briles because of the off the field stuff.

If you are up to the challenge, at the end of your article, you have the option of challenging another sports writer to take on the challenge.