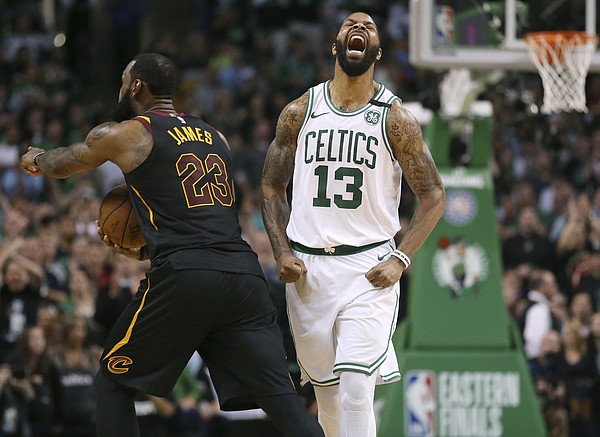 Boston Celtics forward Marcus Morris, right, and Cleveland Cavaliers forward LeBron James react after James didn't cross the half court line in the allotted time during the second half in Game 7 of the NBA basketball Eastern Conference finals, Sunday, May 27, 2018, in Boston. (AP Photo/Elise Amendola)

Before he joined the Celtics via offseason trade nearly a year ago, Marcus Morris experienced all of four playoff games during his first six seasons in the NBA.

He made up for lost time over the past month-and-a-half, though, becoming a bit of a Boston crowd favorite amid an improbable postseason run that ended one victory away from The Finals.

No, Morris, despite all his defensive powers and confidence, couldn’t topple the Eastern Conference’s King, LeBron James, who reached The Association’s grandest stage for an eighth consecutive year.

But the physical, sometimes confrontational approach of Morris, a former Kansas standout, played a role in pushing James’ Cavaliers to the brink of elimination. Whether he was celebrating his own and-one, a teammate’s dunk or some hustle play that charged up the Celtics and their supporters, Morris screams and ensuing crowd eruptions became commonplace in Boston.

“This is probably the most I’ve ever screamed in my life,” Morris told a group of reporters while cracking a rare smile earlier this week, after the Celtics’ season concluded with a 4-3 conference finals loss to Cleveland. “I’m not really a big screamer. Off the court I am so much different than I am on the court. I just thought that there were times we needed that and they feed off it. So it was definitely a fun experience.”

Morris’ seven seasons in the NBA have taken him through Houston, Phoenix, Detroit and now Boston. He said he turned out to be “one of the fan favorites” at every stop except Phoenix. After averaging 12.4 points and 5.4 rebounds in 19 playoff games, Morris saw Celtics fans embracing him, antics and all.

“It was just a matter of time,” Morris said. 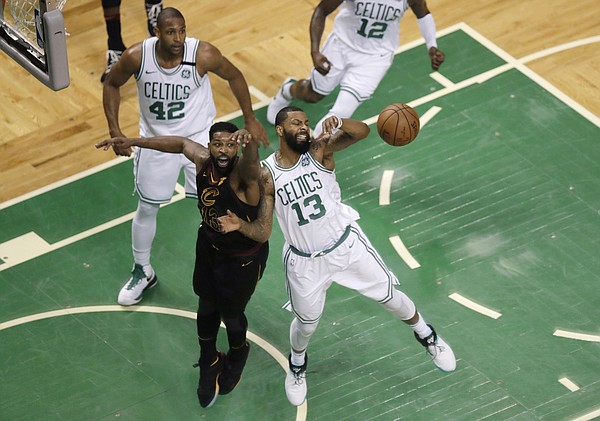 Following his first season with Boston, Morris felt grateful for the trade that sent him there from Detroit. Pointing to both a knee injury and a court case in which he and twin brother Markieff were acquitted of aggravated assault, Morris thought the regular season got off to a slow start.

“But gradually I found my way and became a big help for this team,” said Morris, who averaged 13.6 points and 5.4 rebounds in 26.8 minutes during the regular season. “Playing in Boston is special, man. I’ve been around a lot of places and Boston has definitely been my favorite.”

Although Morris has a year left on his contract, he doesn’t know whether he will be back with the Celtics for the 2018-19 season. If he and all of his teammates are healthy, it could be difficult for him to see as much playing time as he did this year.

While coach Brad Stevens could definitely find avenues to make sure Morris fits in the rotation, Boston would have Gordon Hayward, Jayson Tatum and Jaylen Brown all playing in front of Morris. Throw in the fact that president of basketball operations Danny Ainge only kept four players in place from a team that reached the conference finals in 2017 and nothing about this off-season can be assumed.

Morris told the Boston Globe he’s heading into the summer unsure if he’ll still be with the organization by preseason training camp.

“There’s going to be a lot of players next year, so I’m not 100 percent sure where I fit totally yet,” Morris said. “It’s just something I’m still kind of wary about.”