Josh Jackson left his rookie year wiser, now he wants to get stronger 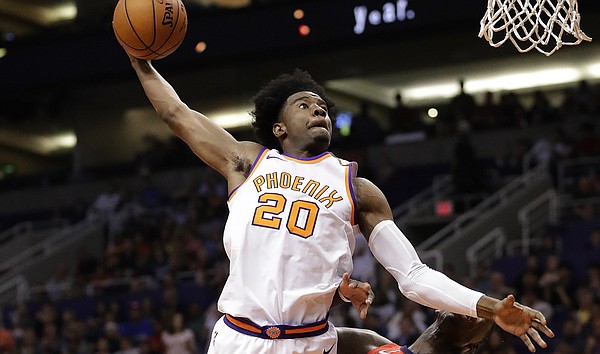 Nothing humbles a lifelong basketball prodigy quite like finally reaching the NBA only to find out that combination of athleticism and skills that helped you dominate in high school and college isn’t nearly as effective anymore.

In his first year as a professional, after leaving Kansas, Josh Jackson improved greatly over the course of the lengthy regular season, garnering a spot on the NBA’s All-Rookie second team.

Still, Phoenix’s No. 4 overall pick in the 2017 draft said recently his summer plans involve spending “a lot” of hours at the gym, because he wants to get stronger, add some muscle weight and work on improving his ball-handling.

“I think this year I had a lot of turnovers where I was just dribbling and lost the ball,” Jackson shared in a video interview for the Suns’ website. “A lot of times where I just took a look at myself and the other guys on the court, and I’m like, ‘Wow. These guys are a lot stronger than me. This needs to change.’”

While his mistakes, especially those that resulted from being overpowered, might stick out in his mind, high turnover rates are common for high profile rookies, because they typically play for bad teams and are asked to carry much of the offense at a young age (Jackson turned 21 in February).

JJ among the rooks! 💪 pic.twitter.com/rfsVrvcGfl

Looking back at his first go-round, Jackson understands why strength and conditioning workouts will have to become a staple of his offseason.

“Before that all-star break (mid-February) I think I was probably the most tired I’ve ever been in my life. I was literally gasping for air. But I made it through. I made it through,” Jackson repeated. “I’m happy I’ve got one NBA season under my belt and I see what it’s like now. It’s a long stretch. You’ve gotta take care of your body and you’ve always gotta be prepared and ready to play.”

Perhaps his most memorable initiation to the reality of the NBA came at the end of one of his best individual showings. Jackson capped a 27-point night (13-for-24 shooting) at Houston late in the season by knocking down a 17-foot, go-ahead jumper with less than two seconds left.

Jackson thought he won the game for Phoenix, and that belief “lasted maybe about 15 seconds,” because the Rockets’ Gerald Green made a 3-pointer on the other end.

Off the court, Jackson had to get the hang of the NBA’s rigors, as well.

“I knew about the 82 games. I knew it was gonna be hard. What I didn’t know was about the travel schedule. I didn’t really put that into perspective,” he admitted.

Playing in Phoenix or some other city, getting on a plane afterward and playing in another city the next night took some getting used to, as did so much flying for someone who is afraid of heights.

“Sometimes after a game I just want to go home, lay down and go to sleep, but you can’t,” Jackson said, adding he’s trying to find ways to fall asleep on planes. “I still haven’t figured it out yet.”

Even though the Suns went 21-61 (worst in the NBA) during his rookie year, Jackson is optimistic about the franchise’s future. The team is likely to build around him, Devin Booker and the upcoming No. 1 pick in the draft — possibly Deandre Ayton or Luka Doncic.

“I honestly can’t believe my rookie season has come to an end this quick, but I had a lot of fun this year,” Jackson said. “Obviously we had kind of a tough season, but I enjoyed all the guys this year, the coaching staff, and I’m excited for next year, getting to work with these guys this summer and see what we can bring to the table next year.”