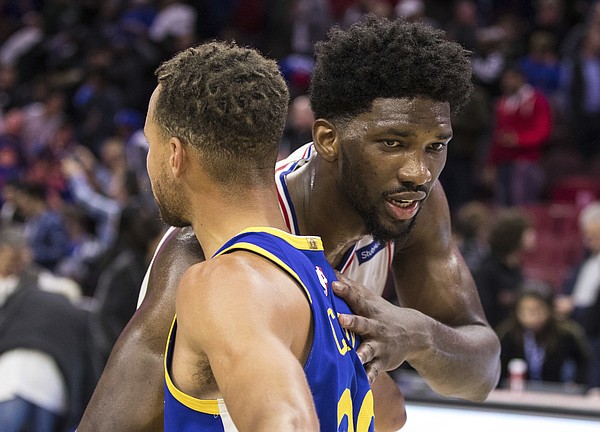 When Joel Embiid makes his NBA All-Star debut in a few weeks, he will do so as a temporary teammate of two-time league MVP and two-time champion Stephen Curry.

Golden State’s 3-point-shooting savant, as the leading vote-getter in the Western Conference, earned a captainship opposite the East’s most popular superstar, LeBron James. The two perennial all-stars and NBA Finals opponents spent a portion of their Thursday afternoon drafting their teammates — a new twist on the league’s annual February showcase.

Where exactly Embiid, the 7-foot-2 Philadelphia center and former Kansas standout, fell in the pecking order isn’t widely known at this point. The NBA opted not to televise the all-star draft this year (more on that later). All we know for sure is James had the first pick and both he and Curry had to select from a pool of starters — as voted on by fans, media and players —before picking up any of the reserves — chosen by the league’s coaches.

Embiid will take the floor with not only Curry, Feb. 18, in Los Angeles, but also Giannis Antetokounmpo, James Harden and DeMar DeRozan. The “Team Stephen” starters will open up the exhibition at Staples Center versus “Team LeBron,” featuring Kevin Durant, Anthony Davis, DeMarcus Cousins and Kyrie Irving.

Considering Harden and Antetokounmpo are two of the premier players in the NBA, it’s safe to guess Curry selected Embiid fourth or fifth overall.

While the lineups will fluctuate greatly during the course of the game it should be entertaining to watch Embiid try to take on New Orleans bigs Davis and Cousins for stretches. But look for the Sixers’ star to really put in work when he gazes across the court and sees Kristaps Porzingis headed his way. Embiid beat out the New York star for the final available front court starting spot in the East, prompting Porzingis to tell reporters, “players know,” he should have been a starter over Embiid, referencing his peers casting more votes for the Knicks’ unicorn than Philly’s trash-talking center.

“Joel’s obviously gonna be a future all-star for plenty more years, and this is his first go-round,” Curry said. “Maybe one day that weekend he’ll take over my Twitter account and say some jokes for me or something.”

The @Jumpman23 jersey #NBAAllStar @JoelEmbiid will be rockin' in LA. (via @SLAMonline) pic.twitter.com/Ri5PzrpuO1

Fans and followers of the NBA would’ve enjoyed the chance to watch Curry and James take turns deciding the all-star rosters, perhaps groaning when the other selected someone before his opponent had a chance to swoop in or talking trash about which team looked more devastating.

We might get to see all of that and more play out in 2019. James said on TNT after the teams were unveiled: “This thing should’ve been televised.”

Curry agreed, and said while the process was cool behind closed doors, “Hopefully we’ll both be captains again and we can broadcast it to the world in real time.”

The New York Times’ Marc Stein reported there was enough “union pushback” from the NBA’s players to inspire the league to not televise or stream the all-star draft this year.

My understanding is that the new captains-pick-their-teams format was indeed hatched with the full intention to televise the draft. But union pushback -- NOT unanimous pushback, but enough -- scuttled the plans to put it on TV

The National Basketball Players Association released the following statement to SB Nation on the matter:

“It was the absence of a consensus by prospective players likely to be affected that led to support for a reveal (instead of a televised draft). Whether a decision to broadcast the draft will be made after this year’s game, that will be determined going forward.”

In addition to starting in All-Star Weekend’s main event, Embiid will also play in the NBA’s Rising Stars Challenge — a showcase for first- and second-year players — two nights earlier.

With rosters split up by nationality, Embiid will join Team World against Team United States. Just as in the actual All-Star Game, Embiid will be the only former Kansas player in action.

Embiid was slated to play in the Rising Stars game a year ago, but missed it due to injury. The 23-year-old played in only 31 games during 2016-17, his debut season.