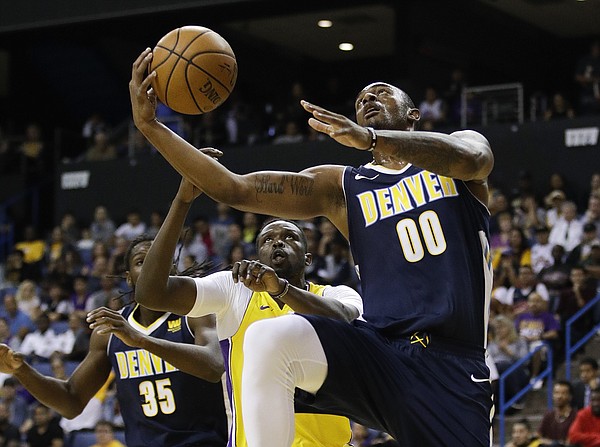 Denver Nuggets' Darrell Arthur drives to the basket as he is followed by Los Angeles Lakers' Luol Deng during the first half of an NBA preseason basketball game, Wednesday, Oct. 4, 2017, in Ontario, Calif. (AP Photo/Jae C. Hong)

Yes, you read that right. Darrell Arthur is still in the NBA. Gainfully employed by the Denver Nuggets, the ninth-year backup forward probably won’t play much while earning approximately $7.5 million. Sweet gig.

The 6-foot-10 Arthur averaged 6.4 points and 2.7 rebounds this past season, his fourth with Denver, but finds himself buried even deeper in the Nuggets’ frontcourt rotation with the free-agent signing of Paul Millsap. Juancho Hernangomez, Trey Lyles and Kenneth Faried all figure to play larger roles than Arthur.

When (if?) Arthur does play, a Denver team hopeful to make the playoffs can count on the veteran big to play sound team defense and maybe even knock down some 3-pointers — he made a career-high 53 during the 2016-17 season while shooting 45.3 percent, also a personal best.

The NBA’s summer spending spree of 2016 worked out well for Cole Aldrich, who made a homecoming signing with Minnesota. The 6-11 Aldrich remains a sturdy defender in the paint and a good-spirited guy who helps out in the community. But the Timberwolves and head coach Tom Thibodeau didn’t have much use for Aldrich on the court.

The former KU big man played just 8.6 minutes a game in 62 appearances off the bench a year ago and averaged 1.7 points and 2.5 rebounds.

If you turn on the T-Wolves and Aldrich is playing, odds are the game is already a blowout or the frontcourt rotation is lacking one or more of Karl-Anthony Towns, Taj Gibson, Gorgui Dieng and Nemanja Bjelica.

There will be no farewell tour for Oklahoma City old head Nick Collison this season, but it very well may be the last go-round for the former KU star.

With 13 seasons of NBA mileage on his soon-to-be 37-year-old body, Collison won’t often hear Thunder head coach Billy Donovan call him up from the bench to direct him toward the scorer’s table.

Collison, who has played every game of his career for the same franchise, appeared in a career-low 20 games in 2016-17, leading to some minuscule averages, such as 6.4 minutes, 1.7 points and 1.5 rebounds. Those numbers might even decrease during his 14th professional season.

So why did Oklahoma City re-sign him to a one-year deal a few months back? Collison is a renowned locker-room presence and, honestly, even if the organization brought him back solely for the team’s annual Halloween party, it was worth it to see him as Woody Harrelson’s Billy Hoyle from “White Men Can’t Jump.”

Catch Collison on one of OKC’s 27 nationally-televised games this season if you can. You’ll want to witness the Russell Westbrook/Paul George/Carmelo Anthony experiment anyway. 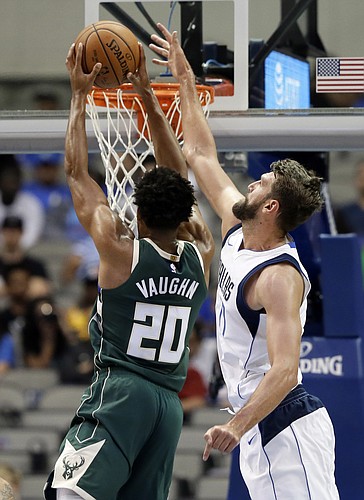 Milwaukee Bucks guard Rashad Vaughn (20) gets past Dallas Mavericks center Jeff Withey for a basket during the second half of a preseason NBA basketball game, Monday, Oct. 2, 2017, in Dallas. (AP Photo/Tony Gutierrez)

Through four NBA seasons with two different franchises, former KU shot-blocking specialist Jeff Withey has yet to become a key member of a team’s rotation. We’ll see if that changes with his new job as a Dallas backup center. His responsibilities with the Mavericks certainly have.

Eddie Sefko of the Dallas Morning News reports Withey’s new team likely will deploy him not only as a rebounder and defender, but also a — wait for it — 3-point shooter(?!).

"We like his length, shot-blocking ability," Mavs coach Rick Carlisle said. "Mark [Cuban] was really a key guy on this. He'd been studying him for a while. And he's shown that he can knock in some perimeter shots from time to time. Looking at his shooting technique on film, there may be a viability for him to become a 5-man who can shoot the ball from the perimeter. In certain situations, we have him popping. I understand it's going to be a process."

Keep in mind Withey’s career totals from beyond the arc are 0 makes — as in his next will be his first — on four attempts. This preseason, though, Withey drained three of eight from downtown. He’s definitely a better shooter than fellow backup pivot Nerlens Noel for those occasions when Carlisle wants to stretch the floor.

The young big from Mali who only played 7.5 minutes a game for Bill Self at KU wasn’t exactly a staple of the New Orleans rotation as a rookie, but he did get 11.7 minutes of court time in his 17 appearances, averaging 5.1 points and 4.3 rebounds.

Early on this season, the 6-9 21-year-old could become far more involved. The Pelicans obviously will rely on two of the best big men in the league, Anthony Davis and DeMarcus Cousins, the vast majority of the time. But Diallo should be the first big off the bench — for now — with Alexis Ajinca (knee) and Omer Asik (illness) out of the lineup.

“This is my chance. This is my time. So I’ve gotta do whatever to try and make it,” Diallo said in a recent interview posted on the Pelicans’ website.

After spending much of his rookie season in the former D-League (now G-League), Diallo has a chance to make himself a more memorable player. 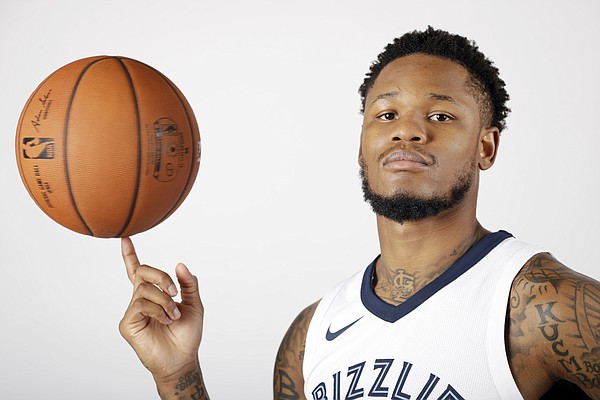 Finally, after four seasons of basketball purgatory with the Sacramento Kings, Ben McLemore has a chance to experience NBA basketball with a stable franchise … eventually.

A month after signing a two-year contract with Memphis this summer, McLemore broke his right foot in a pick-up game. The Commercial Appeal reports the 6-5 shooting guard isn’t expected to return until sometime in November.

When McLemore gets back to 100 percent he should be able to win a starting spot in the Grizzlies’ backcourt alongside Mike Conley.

During his final year with the Kings, McLemore played a career-low 19.3 minutes, shot a career-best 38.2 percent from 3-point range and averaged 8.1 points and 2.1 rebounds.

Memphis isn’t exactly the playoff lock it used to be, but McLemore is in a much better situation and should get chances to show whether he is capable of becoming a more impactful NBA player than he was in Sacramento.

None by Memphis Grizzlies

Diallo could've spent another year here at KU to have a monstrous season in NBA earlier. BTW, kudos to this column! Good refresher!

Collison doesn't need to jump, much. He's already got a much better jumping off point than Harrelson ever did.

I sure am glad I'm not the radio announcer for Timberwolves games.

Genuine props to anyone who did not forget that Darrell Arthur still exists in the NBA.

I got to witness a rare start for Darrell Arthur, in.person, last year on 1/7/17 in OKC. Pretty sure he hit two Trey's in that game too.