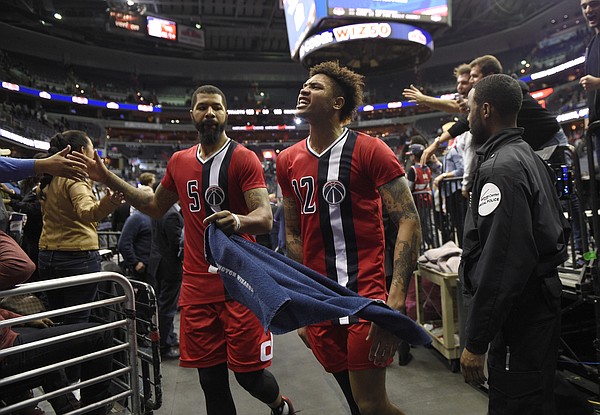 Kelly Oubre Jr. never has been the type of player who cares what people think about him or his game, and it doesn’t sound as if an on-court playoff altercation is about to change that.

A half-day removed from his Game 3 ejection, after he shoved Boston’s Kelly Olynyk to the floor, Oubre on Friday spoke with media in Washington, D.C., for the first time about what prompted such an outburst.

The second-year Washington forward said it wasn’t the first time Olynyk — called for an illegal screen while delivering an elbow to Oubre on the play that incited the squabble — and the former Kansas wing clashed.

“I’ve been hit in the head multiple times by the same person,” Oubre said in a video posted by The Washington Post’s Candace Buckner. “I’ve confronted him about it. But the last time it happened, I fell, I felt pain in my head and my jaw, and I got up and I ran to him and I bumped him. That’s all that happened.”

While Oubre, a key reserve for the Wizards, said that type of physical reaction with an opponent won’t happen again, because he learned his lesson and has to control himself, he also insisted that won’t change his hard-playing approach to the game.

“But I’m gonna keep raging on the court. I’m gonna keep screaming at everybody in the crowd and I’m gonna continue to do me,” Oubre said. “So nothing’s gonna change from this incident.”

Oubre, shooting 41.2% from the floor during his first NBA Playoffs, has made 10 of 25 3-pointers in the postseason and is averaging 6.3 points and 2.6 rebounds off Washington’s bench (17.4 minutes a game). After footage of his contact with Olynyk went viral on Twitter and Instagram, Oubre joked his financial adviser told him he got some inquiries from the NFL.

On a more serious note, his biggest concerns now are whether the NBA will suspend him for his actions. Oubre said he didn’t know what to expect on that front.

“Whatever the league does, they do,” he said, “but my job is to be here in Washington, and be with my team.”

Moving past the rush of fury he displayed served as the 21-year-old’s primary message during his media session.

“Whenever my head hurts or I get hit in the face, my initial reaction isn’t going to be pleasant. But I’m pretty mindful. I take my inner peace very seriously,” Oubre said. “When that happened, that’s something that’s very rare and it could only happen in a situation like that.”

Oubre joked his financial advisor received calls from NFL after his "beeline" on Olynyk. On serious note: doesn't know how NBA will respond pic.twitter.com/APBd31VERZ

Oubre suspended for Game 4. Has to learn to be smarter on the court.

I'm so proud to see that someone who conducts himself in such a professional manner is a Jayhawk.