After injuring ankle, Markieff Morris vows to return for Game 2 vs. Boston 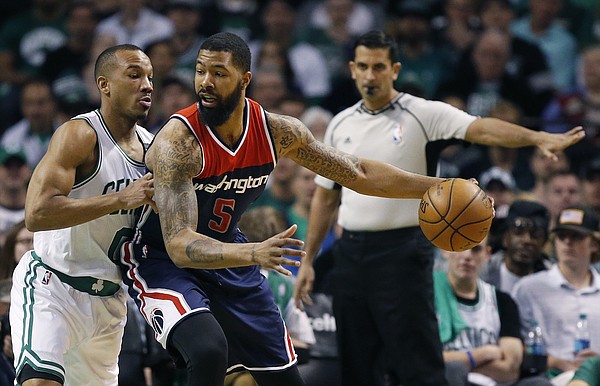 Markieff Morris’ first foray into the NBA Playoffs was going smoothly until he badly rolled his left ankle on Sunday, in Game 1 of Washington’s second-round series against Boston.

Morris, a former standout at Kansas, played a key role in the Wizards’ first-round victory over Atlanta, but only logged 11 minutes in his team’s opening game versus the Celtics, after rising up for a jumper and landing on Al Horford’s foot during the second quarter.

The sixth-year forward made the shot — and even remained on the court for a successful free throw after writhing in pain — before exiting the game for good due to the severity of the ankle roll, with his team up three points. In his absence, the Celtics went on to win, 123-111 to take a 1-0 lead in the Eastern Conference semifinals.

After the game, Morris told Candace Buckner of The Washington Post he feared he had broken his left ankle on the play.

“This was my worst one. I kind of tend to twist my ankles,” Morris told The Post. “That’s my injury. Ankle-twisters. This was by far the worst one.”

However, by Monday, Morris vowed to be back in the Wizards’ lineup for Game 2 at Boston, on Tuesday night.

“I’m playing tomorrow. It’s final,” Morris updated The Washington Post. “There’s nothing the doctors can say to me for me not to be able to play.”

According to Buckner’s report, Morris required “round-the-clock” treatment on his ankle since the injury. He answered questions from reporters with his ankle wrapped up and receiving electronic stimulation. Morris, who only was able to contribute 5 points and 3 rebounds in Game 1, was asked whether he thought Horford undercut him, with intentions of taking away his landing space.

“I’m not sure. I’m [going to] ask him though,” Morris told The Post. “I’ve looked at it a couple times,” he added of the replay footage of his injury. “It’s not really that pretty, so couldn’t really watch it too much.”

Meanwhile, Washington coach Scott Brooks wasn’t ready to throw his support behind Morris’ prediction that the starting power forward would be back on the floor two days after suffering a severe ankle injury.

“It’s a sprain and our medical team will all get together and do what’s best for him,” Brooks told The Post, “but right now he’s out until we see how he feels tomorrow.”

“He’s a matchup problem,” Brooks told Buckner. “He can score inside. He can score outside. He puts the ball on the floor. He gets six, seven, eight rebounds a game, but he blocks out. He knows how to play. He’s a smart basketball player. We definitely missed him, but I will tell the guys — there’s no excuse. We got beat.”