Kelly Oubre Jr. making name for himself on defense 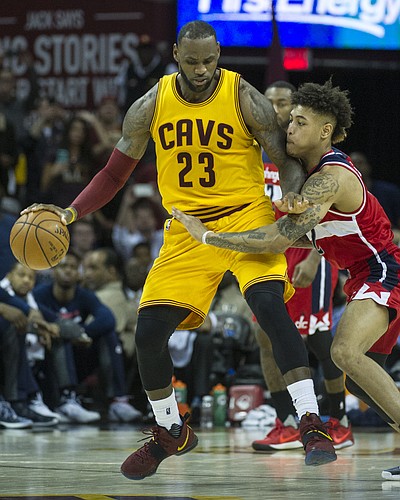 Little stood out about Kelly Oubre Jr.’s first year in the NBA. The first-round pick out of Kansas played sparingly for a middling team that missed the playoffs, despite much loftier expectations.

Rookie seasons are made to deliver hard lessons, though. Now Oubre has transformed himself into a much more reliable member of the Washington Wizards and has played a key part in the team’s climb toward the top of the Eastern Conference standings.

A year ago, Oubre revealed recently in an interview on the Wizards Tipoff podcast, he just felt happy to be in the league. The 21-year-old now finds himself in a situation, under first-year Wizards head coach Scott Brooks, where he has peace of mind and confidence, because he knows his performance is important to the Washington’s success.

The 6-foot-7 forward comes off the bench for the Wizards, and only averages 19.5 minutes and 5.9 points on the season. But Brooks needs Oubre’s defense, and the second-year wing often guards the opponent’s best wing — think: LeBron James, Carmelo Anthony, etc. But the athletic sub also has shown a capacity to help star D.C. guards John Wall and Bradley Beal out by defending smaller guards, such as Boston’s Isaiah Thomas.

“I think that’s something different that these teams aren’t used to,” Oubre said on Wizards Tipoff. “Just a 6-7 long defender coming out and guarding point guards, especially of the smaller caliber. It’s fun to me, man. It’s a challenge. Obviously these guys are great. These guys are good at what they do. And going out there and competing and trying to hold them from their average is something that I take pride in, man. I don’t want anybody to come in and let their best player just torch us.”

“And it’s fun to guard the other team’s best player,” Oubre added. “If it’s a point guard, if it’s s shooting guard, small forward, power forward — no matter what I want to guard him. My teammates give me that confidence to pretty much go out and guard anybody.”

Self-assured in all he does, even Oubre had to get a boost to his boldness last week upon scoring 16 points on 7-for-8 shooting, with 7 rebounds and a steal in 26 minutes off the bench at Cleveland — a game Washington (46-29) won on the home floor of the NBA’s defending champions.

Oubre didn’t hesitate to call it his best game of the season.

“Defensively, offensively everything clicking and my teammates playing well all around,” Oubre said. “And just the energy that I brought that game I felt was like something that was one of the best games I’ve put together all around.” 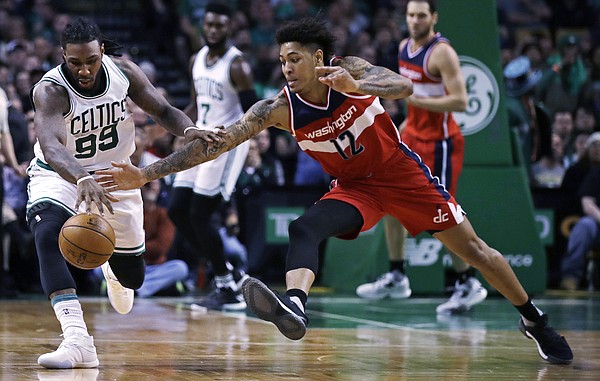 As recently as a few weeks ago, this new-and-improved version of Oubre disappeared momentarily. In four games in early March, he played single-digit minutes and didn’t play at all on another occasion. Oubre said he realized then he just had to become more consistent in everything he did.

“I know my niche. I know what I need to do,” he said, “so I think I’m just growing and learning as a person and then Coach Brooks is doing a great job of molding me into the player I know I can become.”

Now a key backup for the No. 3 team in the East, Oubre has made a name for himself in NBA circles and wants to prove he is as an “ultimate professional.” It’s an approach he admits now he didn’t take in what he considers his worst game of the season, at Brooklyn in early February. Oubre started for fellow Jayhawk Markieff Morris that day, went scoreless in 33 minutes and “wasn’t a factor at all.” It’s a showing he won’t soon forget because it disappointed him greatly.

“That ---- won’t happen again,” Oubre said, calling it another lesson as he works toward becoming a more complete player.

None by CSN Wizards

The second-year pro feels fortunate Brooks has shown patience with him and allowed Oubre to learn and develop. In that same Cleveland game when he looked so good he also gambled defensively a couple of times and gave up 3-pointers to sharpshooter Kyle Korver.

As a rookie, playing for a different coaching staff, Oubre didn’t get to experience the postseason. This spring, he and the Wizards are in position to host at least one round of the playoffs. After an awful 3-9 start to the year, Washington is surging (currently two games behind the Cavaliers and Boston for the No. 1 seed).

“The vibe is different. We want it all. We want everything people said we couldn’t have,” said Oubre, who has scored in double figures three straight games. “And we’re a team that’s not really gonna talk about it too much. We’re a team that’s gonna go out, put the work in and we’re gonna do it.”

— Listen to the entire podcast below.

Go Oubre! Always rooting for a Jayhawk to do well and it sounds like Oubre has found his place.