How Kelly Oubre Jr. infuriated a gym full of strangers in Dallas 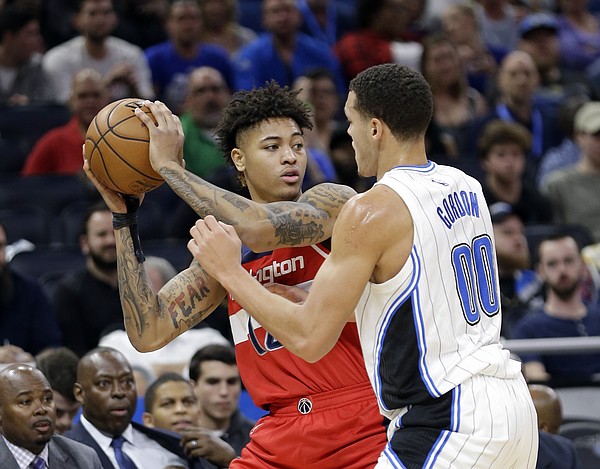 Washington Wizards' Kelly Oubre Jr., left, looks to pass the ball as he is defended by Orlando Magic's Aaron Gordon (00) during the first half of an NBA basketball game, Friday, Nov. 25, 2016, in Orlando, Fla. (AP Photo/John Raoux)

Kelly Oubre Jr. doesn’t need any fans in the Dallas area, and apparently on his recent road trip with the Washington Wizards to the metroplex Oubre actually created some haters.

Oubre interrupted a noon pickup game at a YMCA, enraging the locals who had taken time out of their day to get a run in. One bystander peeved to see an NBA player getting in the way of some scheduled hoopage happened to be a writer named Tim Rogers, who detailed the encounter in a blog post for DMagazine.com.

According to the eyewitness, Oubre shot (with a trainer/rebounder in tow) at one end of an open full court while a group of 10 other men — and even some onlookers — began shouting at him to get out of the way so they could start their game.

Someone went to get management to resolve the situation. We all waited on our end of the court, cursing Kelly Oubre. Management came and went. Kelly Oubre kept shooting.

We determined that Kelly Oubre would get the hell out of the way if we just started our game. And that we did. I was on defense and grabbed the first rebound, took the ball up the court, running the wing, passed it to my left as we crossed mid court. Now we had 10 guys running toward Kelly Oubre and his trainer, and what does Kelly Oubre do? He keeps shooting. Doesn’t budge.

As you might imagine, the game ground to a halt. Ten guys milling about, cursing.

If you’ve ever played pickup basketball, this all sounds infuriating. The writer did add, though, that Oubre was “quite polite” in spite of the court full of people hating his guts. And the former Kansas player and his trainer stopped at the front desk to apologize after they left.

The incident, though, generated enough buzz — at least among those who follow the Washington Wizards — that Oubre was asked to address it following his team’s 113-105 loss at Dallas Tuesday night.

The Washington Post’s Candace Buckner reported the 21-year-old backup small forward went to the downtown YMCA in Dallas with his trainer, Drew Hanlen, who had set up the session and was given permission by a manager to occupy one basket at the gymnasium.

Reporters asked Oubre if the situation and the following attention that came with it surprised him.

“Nah, it’s just a funny story for me,” Oubre told The Post. “But we’re always working, no matter where it is. No matter what the situation is, we’re going to find somewhere to work out even if people are trying to chew our heads off at the YMCA for interrupting their game. It’s like 40-year-old men but I respect it, though. We’re trying to get better, too, as well as they are. I’m happy that [Hanlen] came down to Dallas.”

Oubre scored eight points off 3-for-5 shooting (2-for-4 on 3-pointers) that night against the Mavericks, and chipped in three rebounds and two assists for Washington, which fell to 16-18 on the season.

This year, Oubre has produced seven double-digit scoring outings, the last coming Dec. 14, when he had 15 points in 40 minutes versus Charlotte — a game that happened to be his only start to date under first-year Wizards coach Scott Brooks.

Athletes certainly have done far worse things to turn off fans, so perhaps it’s appropriate the episode didn’t seem to faze Oubre. He obviously has plenty to work on if he wants to make his NBA career last. Evidently if he has to incense a gym full of strangers to make that happen it’s fine with him.

In my opinion Oubre should have contacted the manager about the scheduling conflict and let him sort it out. His approach just infuriates people who no doubt see him as a pampered rich kid.

Candace Buckner reported the 21-year-old backup small forward went to the downtown YMCA in Dallas with his trainer, Drew Hanlen, who had set up the session and was given permission by a manager to occupy one basket at the gymnasium.

It sounds like the main problem was one of communication. Although the session had been set up ahead of time, apparently no one bothered to put a sign up or inform the other guys, who probably had a regular game going.

The biggest issue should be with the YMCA management, but Kelly could have also apologized to them and told them it had been set up ahead of time and that he needed to get his work in. I can imagine that one of the reasons they were so infuriated is that he completely ignored them, which made him look like he was being arrogant and entitled.

We don't know that there wasn't a sign on the doors, stating that half of the court was reserved.

My biggest question is "Why is Kelly Oubre working out at the YMCA anyway?" I had no idea that NBA players did things like this.

Now, I know that every NBA franchise doesn't have practice facilities in every other NBA city and Kelly Oubre doesn't get private access to the Dallas Mavericks facilities, but working out at the Y? I guess it's probably easier to find a YMCA in every city than it is to find other private options, but I guess that I thought that they would be able to reserve access to private facilities when they travel..