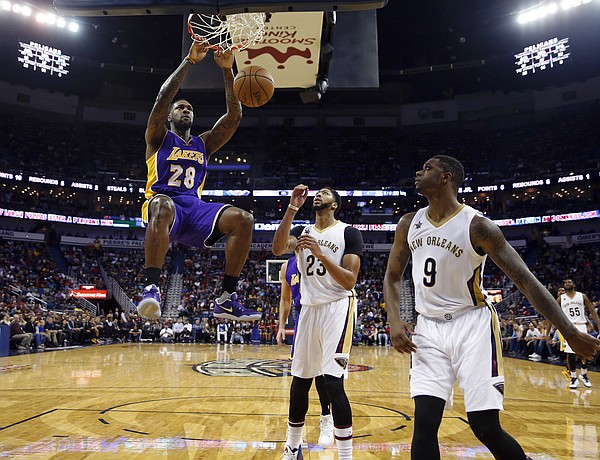 Tarik Black only spent one season playing for Kansas, but he quickly became a fan favorite.

After leaving Memphis as a graduate transfer, Black played 13.5 minutes per game in his senior year, mostly playing behind Joel Embiid.

But since his time in Lawrence, Black has continued to maximize his opportunities from KU.

He recently earned his master’s degree in African-American studies from Kansas. According to a story from Marc J. Spears in The Undefeated, Black put in paperwork to start the Tarik Black Foundation, which he hopes will provide opportunities for inner-city youth in his hometown Memphis.

“I live life to be the role model that I always wanted,” Black said. “And if anybody can learn anything from my story, it is to take what you need, because I’ve experienced a lot. I’ve seen a lot and I won’t be bold enough to say I’ve seen everything. So I won’t ever sit and say that I don’t want anybody to ever mimic me, because a lot of people mimic people.”

In his third year in the NBA, the 6-foot-9, 250-pound Black is averaging 6.0 points and 5.4 rebounds per game with the Los Angeles Lakers. He’s played in 40 games, making three starts.

Black didn’t hear his name called during the 2014 NBA draft, but he’s carved out a role with his strength and hustle.

During his summer offseasons, Black was focused on finishing classes and earning his master’s degree. He told Spears that he chose African-American studies after finishing three points shy of passing the GRE General Test to enter business school. His mother used to work for the National Civil Rights Museum in Memphis.

“My dream and passion actually is doing nonprofit work in a city with so much history when it comes to civil rights leaders or slavery,” Black said. “And the Underground Railroad, Memphis was the main stop in it. So, being from a city like that, understanding the background and wanting to go back and work with inner-city youth, which is my true passion, it actually ended up being a blessing.”

Perhaps what made Black such a strong fan favorite was his positive attitude and ability to notice the big picture.

So it’s no surprise that Black has big plans once he’s done playing basketball.

“It took people helping me through it,” Black said. “People were there for me and my backbone, and carried me through it, locking me into getting it done. It feels wonderful to have that paperwork, especially in today’s world. A bachelor’s doesn’t mean much. It’s basically like a high school diploma. So, having a master’s, it means so much, especially to have the accolade as 24-year-old black man and to me personally.”

Congratulations to Tarik. Good for him. ' He should have won the Jayhawk Spirit Award the year he was at KU. He certainly deserved it.

Terrific young man. I see many great things in his future. Proud to call him a Jayhawk. Unlike Charles Barkley, he IS a role model. :)

Very proud of you Tarik and I watch the box scores every night to see what you have done. You also have a great accomplishment in attaining your Masters degree, but........by saying a a bachelor's doesn't mean much and is kinda like a high school degree really disappointed me.

Good luck in the future.

Congratulations, Tarik! You are a Jayhawk Nation fan favorite and we still enjoy watching you play, wish you best success.