More Frank Mason III could be prescription for Sacramento success 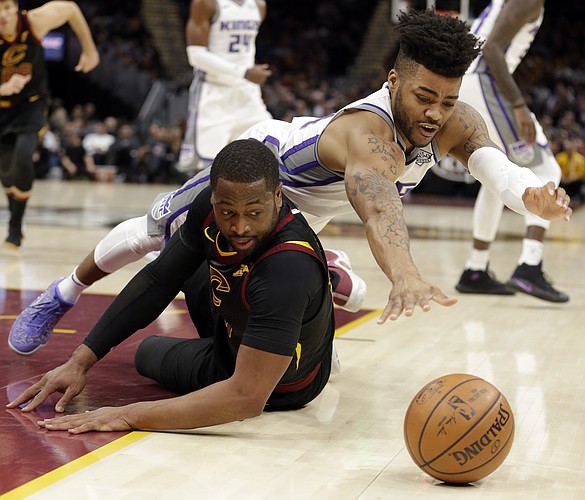 Arco Arena, the former home of the NBA’s Sacramento Kings, had a notoriously noisy reputation, thanks to the cowbell-wielding fanatics who occupied its seats.

Brand-new Golden 1 Center, the Kings’ new permanent residence in California’s capital, hasn’t had the chance to become so renowned yet.

But you know some holdovers from the glory days of Chris Webber, Mike Bibby, Peja Stojakovic and Vlade Divac are just dying to bust out those old noisemakers again.

And much like fictional music producer Bruce Dickinson famously demanded more cowbell during a Blue Oyster Cult recording session fabricated by Saturday Night Live years ago, Kings fans these days have to be clamoring to see more of a certain backup guard.

“Guess what! I’ve got a fever! And the only prescription … is more Frank Mason!”

A recent addition to Sacramento’s regular rotation, the rookie from Kansas continued to endear himself to his team’s fans — and likely teammates and coaches, as well — this week with further examples of his NBA-level merits.

A former KU All-American, Mason flashed incredible passing and finishing in Sacramento’s loss to Cleveland, while also draining jumpers over both Dwyane Wade and the NBA’s real king, LeBron James.

If you were sleeping on him, now's the time to wake up. @FrankMason0 came to play. pic.twitter.com/7XYf8lAmIB

Sacramento (7-17), near the bottom of the Western Conference standings entering Friday’s game at New Orleans, isn’t winning. That’s hardly any fault of Mason, who is averaging 9.9 points and 3.9 assists in 20.5 minutes over his past 10 games — a stretch during which the 5-foot-11 reserve has shot 49.3% from the floor and nailed 60% of his 3-pointers. The Kings haven’t made the playoffs since 2006 and are in the early stages of their latest rebuild, still less than a year removed from trading away franchise player DeMarcus Cousins.

A second-round pick, Mason actually has proven to be a bright spot of late, helping the Kings’ bench lineups, as detailed by The Sacramento Bee’s Jason Jones.

“If not the same five (players), it’s been like the same three or four,” Mason told The Bee. “I think we’ve been playing pretty well together, first or second unit. We just have to keep doing that, cut out the transition points and take a lot more pride on the defensive end.”

According to the most recent data available from NBA.com, the five-man lineup in which Mason has most appeared for Sacramento puts him with Buddy Hield, Willie Cauley-Stein, Bogdan Bogdanovic and Kosta Koufos. That particular combination has a net rating of +7.9, while most of the team’s other frequently-used lineups have massive negative net ratings.

Jones recently argued in The Bee that the Kings need more Mason:

“Frank Mason III continues to show the moment is not too big for him and earns playing time in the fourth quarter of close games,” Jones wrote.

“De’Aaron Fox was drafted to be the face of the franchise, but Mason could prove to be a needed piece in this rebuilding project. His production and intangibles should not be underrated.”

Might be time to purchase that Mason III jersey! #BIFM

Not having been an NBA fan in decades, I've never really transitioned to watch KU players in the NBA but i might just have to start following the Kings. Go Frank!

I rarely actually watch an NBA game but I do follow some of the published articles about Jayhawks in the NBA. In this case, I subscribe (for free) to a daily Kings newsletter with clickable headlines to sacbee.com (the Sacramento newspaper) articles about the Kings. I find myself most interested in Mason's progress and am pleased to see him doing so well. I'm not surprised.

Mighty Mason crossing and shooting over King James. Priceless! Thanks for the news! Freaky Frank will show NBA how competitive he can be. Keep it up Franky!

Those two clips just made me smile. Rob Wade, drop the dime on James. What must it feel like to rise up on LeBron? We want Jordan!

I always find myself rooting for smaller players, anyway, but Mason is special. He has a will of steel, he is really talented, and he knows how to lead, even as a rookie. He is actually a huge part of Sacramento becoming more competitive.

Frank had another solid game tonight as Sacramento came back to beat New Orleans in OT: 12 points, 5 boards, 3 assists and +18 (6 of his 12 pts came in overtime).

Best of all, he played the entire 4th quarter and all of overtime :) The Kings paired Frank with De'Aaron Fox for the last 8:58 of the game, and in that 8:58 Sacramento went from being down by 9 points to winning by 7.

So based on that, maybe Joerger will pair the two rookies together more.

The kid is just a winner.

This is the kind of article I like to see. Keep it up Frank!

He has game! Look forward to the day his jersey is retired at KU.