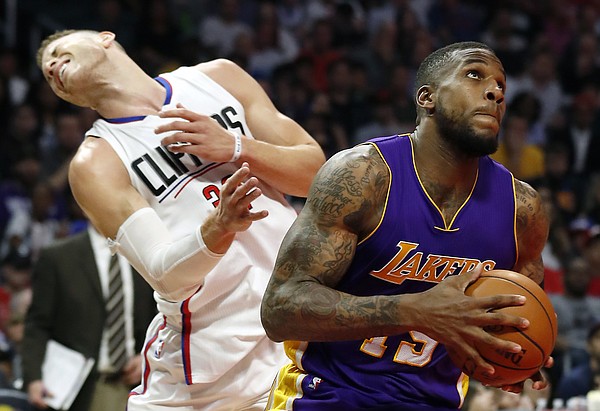 As has been the case throughout his professional career, since leaving Kansas to become the fifth overall pick in the 2012 draft, Thomas Robinson has spent far more of this, his fifth, season in the NBA as a spectator than he would like.

The Los Angeles Lakers, among the worst teams in the league, are more committed to giving minutes to young players they have on long contracts, so Robinson, who will again become a free agent in July, has only played in 43 of his team’s 77 games.

However, an injury to rookie 7-footer Ivica Zubac, whom the Lakers drafted at the top of the second round in 2016, has meant a recent leap for Robinson’s minutes. And the 26-year-old power forward hasn’t let the opportunity go to waste.

The 6-foot-10 backup big man scored in double figures for the third straight game on Sunday, in L.A.’s victory over Memphis. Robinson told reporters afterward — as seen in a video posted by LakersNation.com — he’s thankful coach Luke Walton has given him more chances of late.

“Now I can show all the aspects of my game,” Robinson said following a double-double (12 points, 10 rebounds) in 20 minutes, “and it took a minute, but it’s here.”

Following a string of three consecutive DNP’s, Robinson scored 12 points at Minnesota, 16 points in a road game versus the Los Angeles Clippers and, following a 5-for-9 shooting effort against the Grizzlies, has shot 18-for-33 (55%) from the floor with an increased role in his past three games.

Robinson, who’s averaging 4.7 points in 11.1 minutes on the season, said getting more than a cameo has allowed him to prove he’s not one-dimensional.

“That I’m mobile. I’m not just a bruiser,” the former KU star said of what he has shown. “But with all due means I would take that definition and run with it for years. But I think there’s a little bit more to my game — not saying that’s what I want to be known as — just if you recognize it, respect it.”

Robinson spent much of his most recent strong showing grappling in the paint against veteran big body Zach Randolph.

“I’ll battle with anybody. I love it, though. Z-Bo’s like an old head to me,” Robinson said. “I’ve been watchin' his game for years and talkin’ to him throughout the years and he’s constantly tellin' me to keep pushin’.”

The late-season surge for Robinson really began when he poured in 16 points in 10 minutes on March 21, in a blowout loss to the Clippers.

“I don’t want to say I proved a point,” Robinson told The Orange County Register at the time. “But hopefully I showed I’m capable of performing at this level when I play.”

Currently suiting up for his sixth NBA franchise, Robinson told The Register the only thing he could do was prepare himself to perform.

“He’s been one of our hardest workers all year,” Walton said. “He made the team by how hard he worked.”

An NBA nomad, Robinson remains hopeful the impression he has made in L.A. will allow him to stick around beyond this season. He told The Register he would do “anything possible” to re-sign with the Lakers this summer.

“I would love to be here for a few years,” Robinson said. “Just be somewhere for a while.”

The more he gets to play, the more of a rhythm he gets into....would love to see some double doubles from this guy! Hope his career in the pros is long.

I have always thought the NBA needed 40 teams - there are too many great players who have to go overseas to play.

There are a lot of big cities (St Louis, San Diego) that could support franchises, and then we'd see good players like Frank Mason for sure go where they belong in the 1st round.