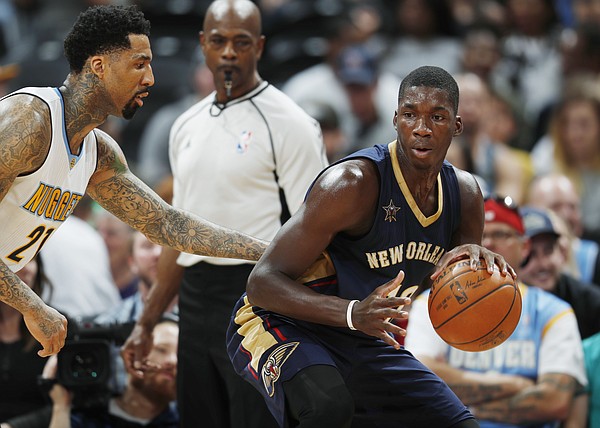 Now that the New Orleans Pelicans are out of the playoff race in the NBA’s Western Conference, the organization has been willing to give second-round draft choice Cheick Diallo a longer look before the regular season concludes this week.

Playing more than 10 minutes for just the fourth time all season this past weekend in a Pelicans loss to Golden State, Diallo put up seven points and nine rebounds in 26 minutes. But a great deal of the former Kansas big man’s work and development over the past several months occurred in much smaller D-League arenas with far fewer people paying attention.

As detailed in The Advocate, Diallo, a 20-year-old native of Mali, experienced seven different stints in the D-League during his rookie season with New Orleans, suiting up for three different minor league teams: the Austin Spurs, Long Island Nets and Greensboro Swarm.

With only two games left in the NBA season, Diallo has played just 15 times for the Pelicans, because the team didn’t need a raw, 6-foot-9 project on the floor when it had bigs such as Anthony Davis and DeMarcus Cousins to eat up minutes and man the paint. Rather than letting Diallo accumulate rust as an end-of-the-bench forward, the Pelicans kept their slim, athletic backup active with trips to the D-League, with experience and development in mind. You may recall Diallo only played 202 minutes in 27 games for Kansas, so he needed all the game reps he could get.

“I just know the D-Leagues helped me a lot and it would help anyone a lot,” Diallo told The Advocate, while discussing his many trips back and forth from New Orleans to at times less glamorous locales. “I needed to play games. And some of it was better than other teams, but it was good for me. And everyone here tells me I’m too young to say I’m tired. So I’m not tired.”

It was in his most recent 15-game stretch that Diallo displayed the talent that many hoped he would bring to KU in his one-and-done 2015-16 season. The young power forward said he felt most comfortable playing for Greensboro, and he averaged 17.1 points and 10.5 rebounds.

New Orleans general manager Dell Demps told The Advocate it was important Diallo bought in to the franchise’s plan for him.

“Some guys want to skip steps, and he doesn’t. He wants to play. There were times when we wanted him around the team for practice purposes and he would bring an energy we really liked,” Demps said. “It was a combination of him getting minutes and practicing with our team so he could learn the system and gain familiarity with our team.”

When Diallo wasn’t practicing with the big boys, he was honing his craft with lower-level affiliates. Chris Reichert, who writes about the D-League at FanSided.com, recently detailed how the Pelicans took a low-risk gamble drafting the energetic big early in the second round and now can begin to see it paying off. Playing more than he had since his high school days Diallo, Reichert details, was able to stretch the floor a little with his 2-point jumpers and use his athleticism and eye-popping 7-foot-4.5 wingspan on both ends of the floor, as well as in transition.

Though some young NBA players might have scoffed at spending so much time on a lesser stage, Diallo explained to The Advocate why he enjoyed his assignments.

“I just want to play, you know?” Diallo said. “I go to any place and I don’t even know the coaches or the players on some of these D-League teams. Then I play a few games and then I’m back with our team and practicing with (Davis) and coach (Kevin) Hanson. Sometimes I didn’t even know where I was, whether in North Carolina or Texas or wherever.”

Praised by the general manager for his progress and exceeding expectations, now Diallo’s head coach, Alvin Gentry, can try and determine just how much his rookie’s time in the D-League helped him by playing him late in the season at the highest level.

“I want to see him against some NBA competition to see if he’s grasped what we’re trying to do philosophically from an offensive standpoint and our defensive concepts,” Gentry said. “We want to try to take a look at him, to see exactly where he is.”

The Pelicans (33-47) close the regular season with two road games, before they’ll have another chance to further evaluate Diallo in a few months, at The Summer League.

Eventually, you just might see him making an impact in The Association, and if Diallo is able to do that, he’ll have his patience and work ethic to thank.

I'll stick with my opinion from last year, he would have gotten more from another year at KU than on and off stints in the D-league. It also would have been good for KU to have an improved and improving Diallo in the line up, especially looking back with 20/20 hindsight. There was a lot of time available for Diallo's talents this past season.

Remember when fans would up signs saying "Free Diallo". What a joke.

My thinking is the Diallo was a mite over rated and was expected to be someone like a 5star that had unlimited ability. Yes he appears to have ability but how much is still unnoticed. Many of our fans during his senior year couldn't understand why he rode the pine but now we realize why. There is more to life than money and players like Mason shows that. Look for Graham to duplicate that theory. I am also convinced that Josh Jackson would enjoy another college year and still become a top pro. Having a jersey in the rafters doesn't happen to those one and done guys..

Probably not a coincidence that he felt most comfortable playing in Greensboro since it appears he was on the court alongside Perry Ellis in that video above.