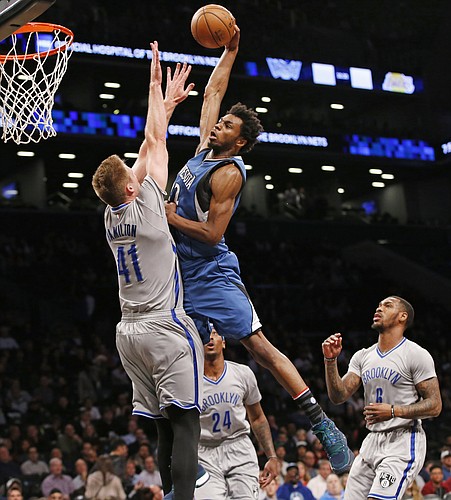 With the growing buzz emanating from Philadelphia thanks to Joel Embiid, it’s become easy of late to overlook another former Kansas basketball player on his way to NBA stardom.

Also overshadowed on his own team by superstar-in-the-making Karl-Anthony Towns, perhaps Andrew Wiggins did enough in his first two years with Minnesota to ignore his progress the first few weeks of this season.

Big mistake. The Timberwolves (1-5) have yet to prove worthy of their preseason hype, but Wiggins looks even more assertive and impressive than a year ago, when he averaged 20.7 points a game.

In four of his six starts, Wiggins has scored 25 or more points. Tuesday night at Brooklyn, the 21-year-old Canadian sensation went for career-highs with 36 points and six 3-pointers.

Whether it’s just a hot start or a sign of things to come, Wiggins’ 3-point shooting in Year 3 has far exceeded what anyone could’ve envisioned for the hyper-athletic, 6-foot-8 wing. After making only 31% from downtown as a rookie and dipping to 30% in 2015-16, Wiggins has caught fire, draining 12 of 18 — 66.7% — on the young season. And while it is way too early to consider him the league’s newest marksman, the fact is Wiggins leads The Association in 3-point percentage, currently sharing that distinction with none other than Embiid (6-for-9).

If Wiggins can make defenders fear his outside touch consistently, the ferocious slasher and dunker could develop into quite a force on the perimeter.

On a career night, though, Wiggins told the Star Tribune following a nine-point road loss to the Nets he felt disappointed in his lack of production at the foul line, where he went 4-for-8. One of his biggest strengths on offense is driving to draw contact, but so far this season Wiggins is only making 68.9% of his free throws.

“I’ve been working on them,” he told the Star Tribune. “I’m shooting worse than last year (76.1%). I’ve just got to keep repetition, working on it in practice.”

Wiggins didn’t see any point in basking in his big individual success, either:

“I’d rather do less and we win. Winning is what we all want to do. Losing is never fun.”

The future all-star can be a pleasure to watch, though, especially on nights like that.

Wiggins and his young teammates are holding themselves to higher standards, but they are just getting started under a new head coach, Tom Thibodeau, and it’s hard to imagine the T’wolves continuing to lose at this rate. A couple weeks into an 82-game grind, Minnesota is in the middle of the pack in defensive rating (103.4, tied for 14th). That figures to improve under Thibodeau, and if the defense makes a jump in the right direction while Wiggins continues climbing toward significant offensive refinement, this could be the first of many successful seasons to come for the former No. 1 overall pick and the franchise.