This former KU player is on an NBA playoff team's roster?

The 2016 NBA Playoffs haven’t exactly been a showcase for former Kansas players.

Other than Marcus Morris averaging 17.8 points for Detroit while the Pistons got swept by Cleveland, and an occasional Cole Aldrich effort play here and there for the Los Angeles Clippers, KU products haven’t stepped into the postseason’s luminous spotlight.

Eight different Jayhawks appeared on rosters of playoff teams entering the first round, but most of them play minimal roles — or don’t play at all — for their respective teams, with Morris being the clear exception, and Aldrich and Paul Pierce chipping in for the Clippers. Both the Pistons and Clippers, however, lost in the first round.

Sure, Brandon Rush plays some mop-up duty for the incredible defending champion Golden State Warriors. But can you even name the other four KU players alive in the playoffs?

Oklahoma City mainstay Nick Collison is an easy one, but it gets difficult after that.

Kirk Hinrich has played a total of 27 minutes and did not play at all in four playoff games for Atlanta.

You might — emphasis on might — remember that Sasha Kaun signed with defending Eastern Conference champion Cleveland. But the 30-year-old NBA rookie hasn’t played a single minute this postseason for the Fightin’ LeBrons.

So who is the other Jayhawk in the playoffs? Well, his role mirrors Kaun’s in Cleveland, but it’s actually another rookie out of KU. Cliff Alexander. 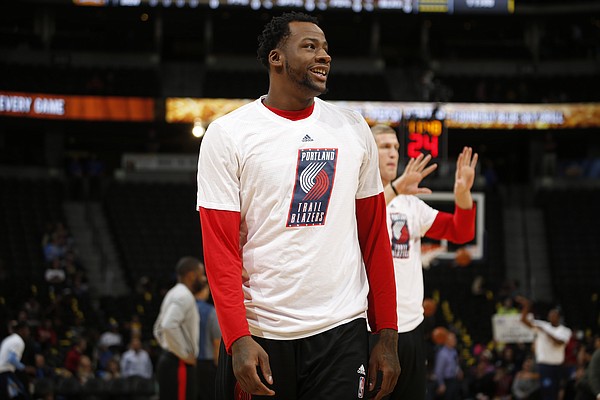 Granted, Alexander’s on-court role with Portland in the playoffs is non-existent, but it’s still pretty remarkable that he’s even there.

Think back to the 6-foot-8 power forward’s 28-game stop at Kansas during the 2014-15 season. A player who started all of 6 games for KU and topped 5 rebounds once in his final 10 games with the Jayhawks is on the roster of a respected NBA franchise that reached the second round of the playoffs.

Alexander, once considered one of the top high school prospects in his class, didn’t even get drafted. But you have to give him props. The big man stuck around with the Trail Blazers, who could have waived him without thinking twice about it.

True, he only appeared in 8 games all season as a rookie, totaling 36 minutes and 10 points, but Alexander had to be doing something right for a playoff team like Portland to bother with paying him ($525,093 this season, according to HoopsHype.com).

In March, Alexander had a rare opportunity to publicly display his basketball skills while on assignment with Santa Cruz, in the NBA’s D-League.

Santa Cruz play-by-play announcer Kevin Danna told The Oregonian earlier this year if Alexander doesn’t make it in the NBA, it won’t be because of the Chicago native’s effort. Alexander’s talent and work ethic impressed those who saw him score 21 points and grab 6 rebounds in one D-League game.

Don’t expect to see Alexander pull off any follow slams against Golden State. Just as in most of the regular season, Portland has kept the 20-year-old rookie inactive throughout the playoffs. It would take a pile of frontcourt injuries for the Blazers to put him in a game.

Once the Blazers’ season ends, Portland has the option to bring Alexander back for the second year of his contract. Assuming that happens, it will be interesting to see if he impressed coaches and front office personnel enough to take on a larger role next season.

Before that, Alexander figures to play significantly more minutes in the Summer League. He’ll need to approach those games the same way he did his D-League assignment. That’s the next step in figuring out a way to turn this NBA gig into a career, and one day earning his way into a playoff rotation.

Cliff Alexander got the short end, thanks to the bumbling of the NCAA and to his mother for taking a loan against his future earnings. He has worked very hard to get this far and I wish him the best. I'm pulling for this young man to succeed in his chosen career. RCJH Cliff Alexander.

Keep working hard, Cliff. Cheering for you and wish you all the best. Jayhawk Nation will be watching and cheering.