Joel Embiid: 'I wasn't good at all' before playing at Kansas 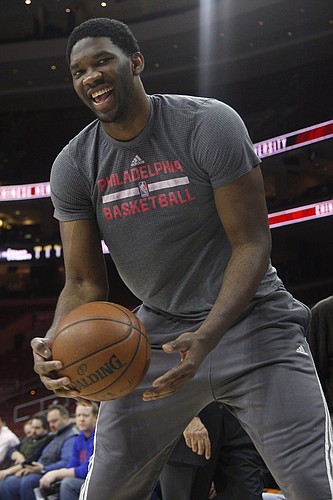 Philadelphia 76ers' Joel Embiid of Cameroon (21) reacts prior to the first half of an NBA basketball game against the Los Angeles Clippers, Monday, Feb. 8, 2016, in Philadelphia. The Clippers won 98-92 in overtime. (AP Photo/Chris Szagola)

The most interesting man in the NBA is back — at least in interview form.

Joel Embiid, who still hasn’t spoken with Philadelphia media since the 76ers drafted him nearly two years ago, at least got to gab recently with VICE Sports, which published the one-on-one Q&A Tuesday.

As Embiid rode around The City of Brotherly Love discussing his journey from Cameroon, to Kansas, to the NBA, the gregarious big man more known for two seasons worth of foot injuries keeping him off the court proved as entertaining in conversation as he is with a basketball in his hands.

Though, as the 7-foot-2 center explained, he didn’t immediately excel at the sport when he first picked it up, as a youngster in Africa.

“I wasn’t good at all. I used to suck. I used to be ---," a grinning Embiid shared. “My teammates were laughing at me, because I can’t even pass the ball. It was really tough. When I first started playing ball, it was hard. So I came a long way.”

During the discussion, the 22-year-old who played high school basketball in Florida revealed his one season at KU and the influence of coach Bill Self and his staff molded him into a much more effective interior force. According to Embiid, his confidence began to grow as a prep, during his recruitment.

“The Kansas coaches, coach Norm Roberts and coach Self, they came to watch me. Coach Self was like quiet the whole practice and coach Roberts was like worried that he wasn’t going to like me,” Embiid divulged. “At the end of the practice, (Self) was like, ‘Are you ----ing kidding me? This guy’s gonna be the number one pick.’”

Once the developing young big arrived on campus, in Lawrence, Embiid said he played in a scrimmage and, “same thing as high school,” got pushed around in the paint. 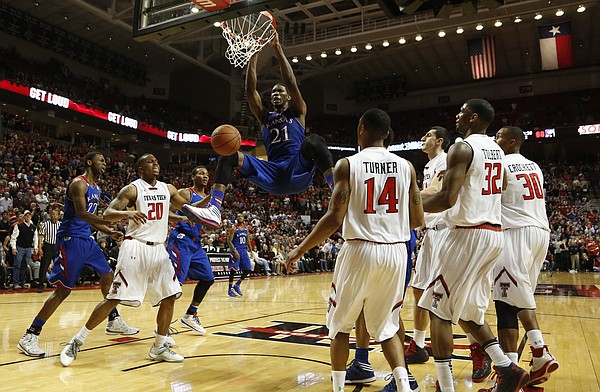 Kansas center Joel Embiid delivers a dunk against Texas Tech to give the Jayhawks the lead with less than 30 seconds on Tuesday, Feb. 18, 2014 at United Spirit Arena in Lubbock, Texas. by Nick Krug

Of course, Embiid progressed so much from the beginning of his freshman season to the end that he learned he would be a top pick in the 2014 NBA Draft, and left KU after one 28-game, injury-shortened season.

“It was really hard leaving Kansas,” Embiid told VICE Sports. “I knew for sure I was gonna go to Cleveland, and be the number one pick, and then, just like that, the injury happened a week before the draft. So I’m like, ‘God!’”

You’ll recall Embiid suffered a fracture of the navicular bone in his right foot, which made both Cleveland and Milwaukee pass on the promising pivot, who also missed games at KU because of a back injury. The pre-draft foot fracture proved serious enough for the Sixers, who selected him at No. 3, to hold him out of the entire 2014-15 season.

Little did Embiid know the same bone wouldn’t heal properly, and he would spend his 2015-16 season going through limited rehab-focused workouts, playing video games and again watching basketball instead of playing.

“When I had a setback this past summer, it was really frustrating,” Embiid remarked. “The foot wasn’t even hurting or anything like that, and then that’s when (doctors saw) that the fracture had been opened again.”

Now 7-foot-2, the friendly giant who has rehabbed himself closer to actually playing NBA games — but won’t be rushed back for Summer League exhibitions — still has seen his popularity grow thanks to his Twitter account, which currently has roughly 392,000 followers.

“Right before the first season (in Philly), I was going pretty nuts on there, and just saying dumb ---- or just being funny, and I think people loved it,” Embiid said of his social media appeal. “I got a lot of comments about it, and people actually wanted me to keep doing it.” 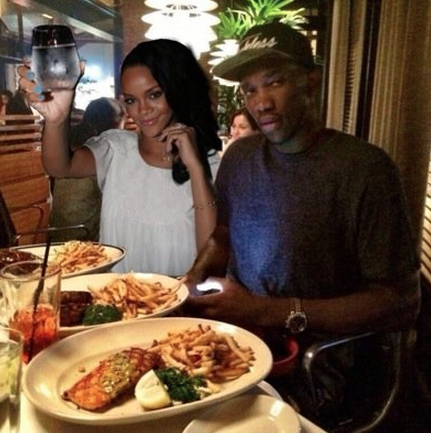 Joel Embiid's Twitter presence has gained him thousands of fans. Above is the Philadelphia center's profile picture, a photoshopped image of him on a supposed dinner date with pop star Rihanna.

Embiid, who spoke with VICE months ago, during a span in which his Twitter presence seemed to be on hiatus, hinted he might have been encouraged to tone it down.

“When I start playing,” he added, “I think I might go back to my ways, you know. We might see.”

Indeed, the fun-loving big man has rediscovered his tweet game the past several weeks.

Stop telling me that yall got the same stats as I do.... I know WE DO but it's about to change though in a couple months lol #CLOWNS

Same as his improving health, this is a significant development for everyone following Embiid’s career. The man was born to entertain, as demonstrated during his interview, when asked about what he likes to eat.

“Mainly Shirley Temples. I drink Shirley Temples by the pitcher. I usually drink like three or four pitchers per day,” Embiid joked, mocking a report that surfaced last year about his suspect dietary habits and an alleged infatuation with the sweet, non-alcoholic mixed drink.

“Nobody really cares about the media. They’re gonna have something to say — ‘300 pounds, Shirley Temples.’ I’m just gonna let my game do the talking,” Embiid proclaimed. “I think some people are gonna be surprised. And I can’t wait to show off.

In fact, The Inquirer’s Bob Ford wrote that Embiid’s skills are so awe-inspiring that his Monday workout at the Sixers’ training facility stole the show, even though possible No. 1 pick Brandon Ingram, out of Duke, was in the same gym for a pre-draft session.

Joel Embiid said, "Move rim get out of the way." pic.twitter.com/nvJzEFl3bX

"You can see what he's doing on the court," 76ers president of basketball operations Bryan Colangelo told reporters as Embiid wowed nearby observers. "It looks like he's getting more fluidity every day. He's done some things competitively, two-on-two and three-on-three in controlled situations, but the word 'controlled' is the key there. Everything's got to be done within the process set forth and the timeline set forth by the doctors."

If all goes to plan, and Embiid fully recovers and returns to basketball, Philadelphia just might have a star on its hands — on and off the court.

His story sounds like a repeat of Bill Walton. A guy who may never be whole again. I truly hope he is healthy because he is a super talent, but a big man with foot injuries is not a good sign.

I saw Joel for the first time at Late Night and turned to my friend and told him, "The scouts may be here to see Wiggins, but they have got to be drooling over this young kid Embiid!" Since talented centers are not as easy to come by as are guards and forwards, Joel just looked like the kind of raw talent that could be turned into NBA gold. If only he had not injured his back, KU might have made a deeper run in the Tournament, possibly winning it. And, if not for injuring his foot, Joel might have been the number one pick in the draft, instead of Andrew.

I wish him well in his rehab and eventual NBA debut.