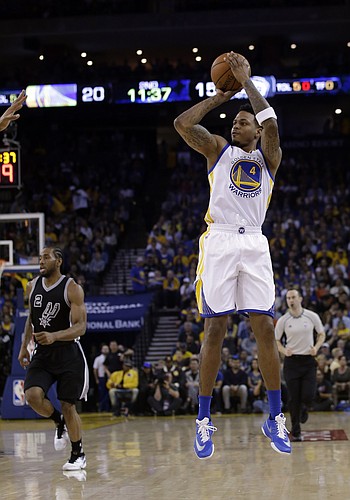 Brandon Rush won’t be playing for one of the most lethal offensive teams ever assembled next season.

After winning an NBA title in 2015 with Golden State, then contributing to the Warriors’ record-breaking, 73-win run through the following regular season, Rush won’t be a part of the revamped Warriors with back-to-back MVP Steph Curry, 2013-14 MVP Kevin Durant, Klay Thompson and Draymond Green.

According to various reports that surfaced Wednesday afternoon, the former Kansas star agreed to a one-year, $3.5 million contract with Minnesota.

Leaving the back-to-back Western Conference champions and a chance to win another — or multiple — rings for the Timberwolves, a franchise that hasn’t reached the playoffs since 2004, likely came down to Golden State’s salary cap situation. With the Warriors adding Durant in a free agency coup, the team couldn’t offer Rush much to stick around.

While winters in Minneapolis will be longer and colder than Rush’s last couple in the Bay area, the outlook for his new team isn’t as frigid. The Timberwolves, though years away from competing for a title, have two key young pieces in Karl-Anthony Towns and Andrew Wiggins, as well as a new head coach, Tom Thibodeau, who posted a winning record and reached the postseason in each of his five years with Chicago.

During his eighth NBA season, Rush filled in as a starter for Golden State 25 times this past year, and averaged 7.0 points and 3.3 rebounds in 21.0 minutes, while shooting 50% from the floor and 38-for-77 (49.4%) from 3-point range. His moments in the spotlight served as a reminder that the 6-foot-6 wing can still fill an important role in the league.

While the Timberwolves have young perimeter players such as Wiggins (another former KU standout), Zach LaVine and Shabazz Muhammad, they could use a veteran defender and shooter like Rush, who turns 31 on Thursday. The veteran guard knocked down 41.4% of his 3-pointers in his final stint with the Warriors. Wiggins shot 30% from deep in 2015-16, while LaVine hit 38.9% and Muhammad made 28.9%.

Rush will find a familiar face in Minnesota, where he’ll team up with another Jayhawk, fellow 2008 national champion Cole Aldrich, who agreed to terms with the T’wolves earlier this week.

Welcome to the pack @BRush_25.

According to basketball-reference.com, Rush made $1.2 million last season with Golden State. He played for a career-best $4 million per season in his fifth and sixth years in the NBA, with the Warriors and Utah.

The Warriors would have won the title if they had played Brandon more. Glad to see he's still getting paid, and that he has a chance to help grow a young team. RCJHK!

His 0.2 ppg scoring average and .000 shooting % in the finals seems to indicate that had he played fewer minutes they might have won.

And you constantly howl that NBA coach/GMs are stupid and you'd be better ..... wow.

Klay Thompson was hardly the problem for the Dubs.

Brandon's injury his freshman year during preparation for the draft turned into a godsend for KU, and probably his eventual lottery status after the National Championship was at least as high as he would have gone as a One and Done.

This year's draft was disappointing for Jayhawks after missing out on the Final Four, with so many Europeans being taken in the first round (without the solid background of three or four years with Bill Self). I expect at least two if not four of them to log some NBA seasons when all is said and done.

Next year will see more KU players with guaranteed contracts than GMs retained for another chase after pie-in-the-sky choices they made this year.

I agree. A lot of the second round was just draft and stash choices so they had cap room to go after the Durant's of the league.

There's no logic to your thought.

Brandon's injury was after his soph season.

My new NBA team is the Wolves!

Let me know if Kansas City ever gets a franchise, and then I'll show some interest in the Association.

I'm sure some NBA team is dying to have you go nuts over every move that their coach and front office make and demand that they be fired....in all caps....

Kansas City had a NBA team back in the 1970's. But they moved to Sacramento because they were losing too much money.

Good for Brandon. I'm thinking that there could be another ex-Jayhawk (Hinrich) possibly signing with the Wolves if Thibs decides he needs a vet combo guard. Thibs loved him in Chicago, so we'll see.