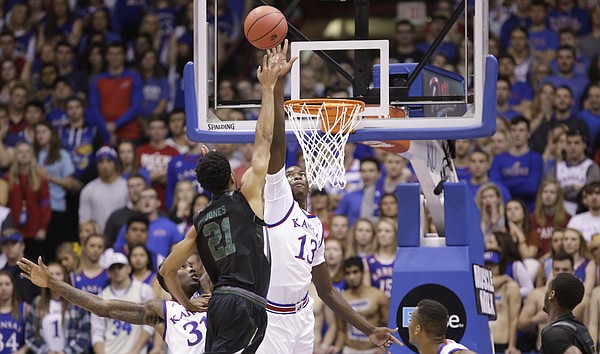 Those days of watching from the bench as older, more experienced players compete on the court are over for Cheick Diallo. At least for the time being.

As New Orleans gears up for its trip to the Las Vegas Summer League, it’s hard to imagine any Pelican being as excited for the opportunity as Diallo, a second-round draft pick who only played 7.5 minutes a game for Kansas during his one-and-done season in Lawrence.

When New Orleans begins its summer schedule Friday night against the Los Angeles Lakers (all Vegas exhibitions will be available to watch via one ESPN platform or another or NBA TV), Diallo will find himself on the floor, playing as meaningful minutes as are available in a summer league contest.

While speaking with reporters Tuesday, Diallo’s face lit up with a smile upon the mention of increased playing time on the horizon.

“Oh my gosh. I can’t wait,” Diallo said in a video posted to the Pelicans’ website. “I’m so excited right now. I just want to go out there and show everybody what I can do.”

Diallo, a 6-foot-9 forward selected 33rd overall in this year’s draft, will get a long look from the Pelicans this month, in the setting of the development-focused summer league, before the reality of a lesser role returns during the regular season.

But that’s months from now. In Vegas, Diallo hopes to display not only his trademark energy in the paint, but also his defensive versatility.

Even though some of the players Diallo will practice with and play against this summer are older than him and more experienced, he doesn’t care about his age or what perceived advantages might be enjoyed by his competition. 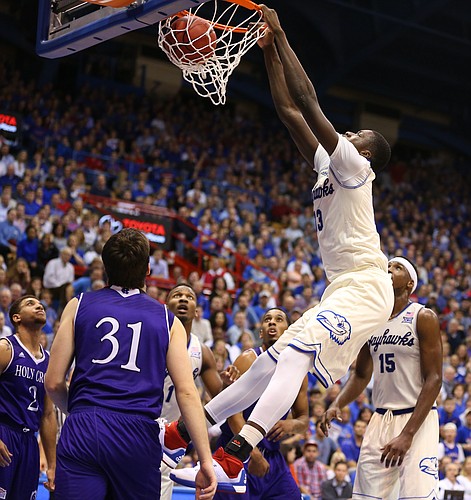 Kansas forward Cheick Diallo (13) throws down a dunk against Holy Cross during the second half, Wednesday, Dec. 9, 2015 at Allen Fieldhouse. by Nick Krug

Instead, the power forward who will team with fellow rookies Buddy Hield (Oklahoma), Jameel McKay (Iowa State) and Anthony “Cat” Barber (North Carolina State) and others this summer has embraced his growing reputation as a vigorous competitor.

“I just want to give my teammates everything I’ve got,” Diallo said, adding he understands that is a major reason New Orleans drafted him. “I don’t really get tired. I just want to keep doing my thing.”

While practicing with the Pelicans in preparation for the upcoming Vegas league, Diallo left the court feeling great about his first professional training sessions, because he was communicative and vibrant in his approach.

“I just want to keep working hard every day and keep learning from my teammates, my coach, all my staff,” he said.

A native of Kayes, Mali, Diallo recently sat down for an interview with the Pelicans’ website to talk about how far he has come, literally and figuratively, since first playing basketball in Africa in 2010.

“Right now, I’m wearing all these nice clothes and have all kinds of stuff,” Diallo said. “It’s really hard to get even a few things in my country — you are not getting any of this stuff. You have to spend a lot of money to get what you want. Back home, no way you are going to get something like this. No way you’re getting a backpack like this. No way you’re getting an iPhone. It’s not easy to get. So today I thank God and my parents, too. Where I am now, if it wasn’t for my parents and God, I wouldn’t be here.”

Skype provides Diallo with an easy way to keep in touch with his parents, brothers and extended family back in Mali, he said, noting those talks remind him of the responsibility he feels to deliver in the NBA in the years ahead.

Gotta love the positive attitude and energy. Hope he has a great summer series and firms up a roster spot, and maybe a nice contract.