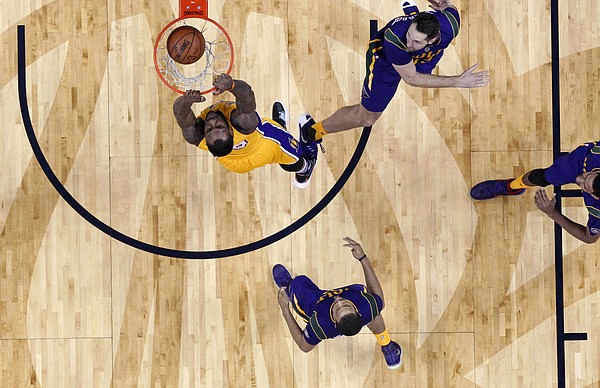 The NBA might be evolving away from traditional big-man focused lineups, but interior toughness remains valued. For proof, look no further than the Los Angeles Lakers’ desire to re-sign third-year big man Tarik Black.

Late Sunday night, the former Kansas center, who went undrafted in 2014 but worked his way into the league the hard way, agreed to a reported two-year, $12.85 million deal with the Lakers.

But, as referenced in Yahoo’s report of the deal, Black has played with both toughness and enthusiasm when called upon during his 77 appearances in purple and gold over the past season-plus, making him a desirable, inexpensive role player on the open market.

Black, who finished his college career at KU as a graduate transfer following three seasons at Memphis, didn’t get selected in the league’s rookie draft out of college. Hoewever, he forged his way into a career by impressing Houston enough during a summer league stint two years ago to earn a regular-season roster spot. When the Rockets had to waive him during his rookie year to pave the way for another transaction, the Lakers claimed the undersized center.

Known for his humble, blue collar approach to the game, Black announced his new deal late Sunday night by simply tweeting out a picture of a Lakers hat.

Although Black didn’t receive much playing time during his second season in L.A., speculation has mounted in the hours since he agreed to re-sign that former Lakers coach Byron Scott didn’t utilize the backup center as much as those running the organization desired.

The sense I get, the Lakers never quite understood why B. Scott didn't play Tarik Black more, was an issue of contention

None by Eric Pincus

Black became a fan favorite for the struggling Lakers over the past couple of years and many wondered why he didn’t play more. It appears that will no longer be an issue, as the 24-year-old returns to L.A. to work for a different head coach, Luke Walton. As pointed out in Yahoo’s report, Black actually played for Walton in 2011, when the new Lakers coach was a college assistant at Memphis.

The Lakers just agreed to a four-year, $64 million deal with free-agent center Timofey Mozgov, so Black won’t enter next season as a starting pivot. But all signs point to an increased role for the hard-working big man as the primary second-unit center.

During Black’s rookie year with the Lakers, he averaged 7.2 points and 6.3 rebounds while playing 21.1 minutes. In that season his per 36-minutes projected averages came out to 12.3 points and 10.8 rebounds.

$6M per year is inexpensive. Yikes!

In my opinion, Tarik Black had a greater impact on his team than any other one-and-done player we've ever had. I base this on his work ethic, leadership and genuine likability as well as his stats.

What do you guys think?

His one year at KU made his m Avery popular leader and Jayhawk!!

I've watched him s career even though I'm not a fan of NBA basketball! He's earned his money and I'm glad to see him get some decent bucks that'll secure his future!