Cole Aldrich thrilled to play for hometown T'wolves, with other Jayhawks 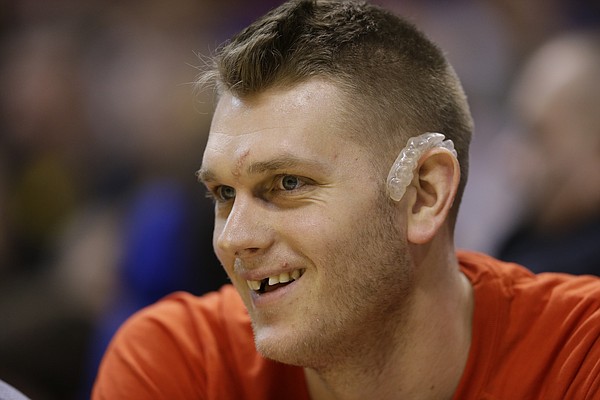 FILE — Los Angeles Clippers center Cole Aldrich (45) on the bench during the second half of an NBA basketball game against the Indiana Pacers in Indianapolis, Tuesday, Jan. 26, 2016. The former Kansas big man was introduced Thursday as a new member of his hometown Minnesota Timberwolves. (AP Photo/Michael Conroy)

By all accounts, Cole Aldrich, the newest member of the Minnesota Timberwolves, has no say in the NBA franchise’s uniform design. Still, the former Kansas center couldn’t help offering up a slight adjustment to the team’s look during his introductory press conference Thursday.

Seeing as how Aldrich is one of three Jayhawks on the roster, along with rising star Andrew Wiggins and recently signed veteran Brandon Rush, the 6-foot-11 big man suggested the Wolves add a Kansas patch to their jerseys, according to the Minneapolis Star Tribune.

Admittedly, the Burnsville, Minn., native feels pretty good about life in general these days, what with that freshly signed three-year $22 million contract to play for his hometown organization. As Aldrich, a six-year NBA veteran who already has played for Oklahoma City, Houston, Sacramento, New York and the Los Angeles Clippers pointed out, the free-agent deals he reached over the past few years were neither longterm nor as lucrative as his new contract with Minnesota.

“It’s great to have security, in a sense, where I have a three-year deal,” Aldrich said in the Star Tribune’s report. “For me, I’ve gone through pretty much my career on one-year deals (since a guaranteed contract as a first-round pick).”

A backup post player since leaving KU to become the 11th overall pick in the 2010 draft, Aldrich never averaged more than 3.3 points a game until the 2014-15 season, with the Knicks, when he put up 5.5 points in just 16.0 minutes. He matched that 5.5 average with the Clippers this past year, despite playing fewer minutes (13.3 a game).

“I finished six years in [the NBA] and sometimes I wonder how the hell I even made it this long,” Aldrich said. “Because the average career is three and a half. It’s just a blessing.”

Bloomington Native @colea45 Makes His Return To The Twin Cities

A self-proclaimed lifelong T’wolves fan, Aldrich also considers himself lucky to be back home. He recalled attending several games during the 2004 playoffs, when Kevin Garnett led the franchise to its first Western Conference Finals berth. Minnesota hasn’t qualified for the playoffs since, but Aldrich said his affinity for the organization never wavered.

“Whether it was in another city, playing for New York or Oklahoma City or wherever, I always tried to keep tabs. You root for your city,” Aldrich told the Star Tribune. “For me to be home, I’m going to go out there and play hard. I’m not going to guarantee a championship or anything like LeBron [James], but I’m going to try to do all I can to help us win games.”

Minnesota’s addition this offseason of Tom Thibodeau, new head coach and president of basketball operations, is expected to give the middling franchise a significant boost as all-stars-in-the-making Wiggins and Karl-Anthony Towns continue to expand their games. Aldrich, a projected backup center with the T’wolves, said he’s eager to work for the famously tough-minded coach.

“The grit and the grind basketball,” Aldrich responded, when asked why he will fit in well with his hometown team. “I love to get my nose dirty. As you can tell, I’ve got a few scars, and I’ve got a missing tooth.”

Someone should tell Cole the mouthpiece is worn in the mouth.