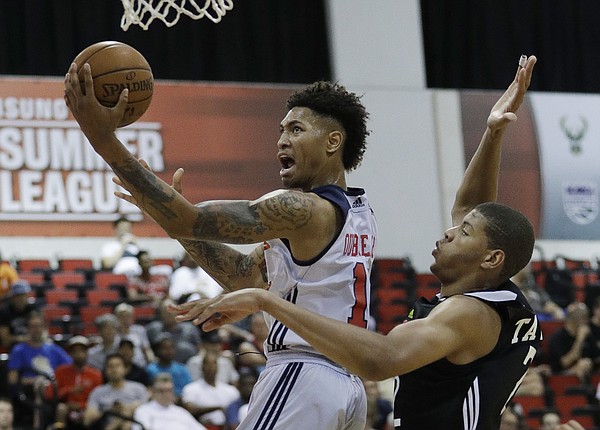 Kelly Oubre Jr. didn’t have the most exciting or memorable rookie season. But now that the NBA Summer League has arrived, the former Kansas wing can try to put that behind him and establish a new tone for Year No. 2.

Shortly after Oubre’s first exhibition, he told CSN Mid-Atlantic why everything felt a lot easier for him this year, in his second trip to the Vegas summer league.

“Now I know what my defined role is, or can be, on this basketball team,” Oubre said. “I’m just trying to do that and perfect that. I’m just out here playing as hard as I can, trying to get wins. That’s the best I can do.”

Still just 20 years old, Oubre (3.7 points in 10.7 minutes during his first full season) appears to be a long way from molding himself into a valuable NBA shooter. So far this summer, he has attempted 15 3-pointers for the Wizards and connected on only 3 (20%). While appearing in 63 regular-season games as a rookie, Oubre made 25 of 79 long-range tries (31.6%).

But there are other ways to ensure yourself regular minutes, and, as Oubre told The Washington Post recently, this offseason he is treating personal defensive improvement as a necessity.

“I’m an energetic player,” Oubre said. “I come in and I try to first and foremost start on the defensive end because that’s what God blessed me with, length and athletic ability, so I feel that’s kind of my calling card, coming out and trying to get stops.”

Oubre showed off his 7-foot-2 wingspan in his first summer action, playing harassing defense that led to deflections and his 4 steals against the Jazz.

“Defense is the key to winning championships, to our offense, to everything,” Oubre told CSN Mid-Atlantic after that showing. “So if I can bring that, and bring that heart and bring that dog onto the court, then we’re gonna be successful.”

Oubre (as pointed out by The Post) is the only player on Washington’s July squad who has a roster spot for the 2016-17 season. Unlike some other former KU players participating in Las Vegas, such as undrafted rookies Perry Ellis (Dallas) and Brannen Greene (Memphis), Oubre is playing as an established commodity for his team. The 15th overall pick in the 2015 draft, the Wizards want him to squeeze as much development as humanly possible out of these summer outings.

Washington’s summer coach, Sidney Lowe, told CSN Mid-Atlantic after Oubre’s strong start in the opener he likes the way the second-year wing is approaching the game.

“He made a couple of big shots for us, but I thought his defense was outstanding,” Lowe said. “That's what he can do. He's long, he's athletic, he was able to get in the passing lanes and it generated some fast breaks for us."

Oubre and the Wizards play again Tuesday afternoon against Brooklyn.