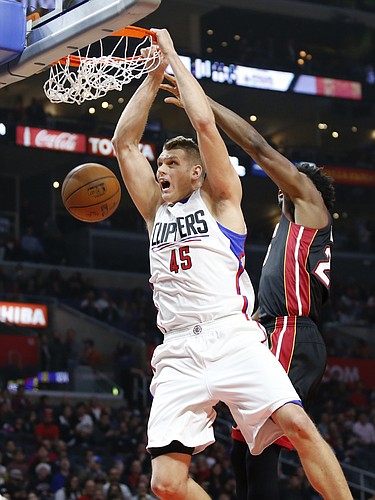 What has gotten into Cole Aldrich?

The sixth-year big man out of Kansas who spent most of November and December not even checking into games for his new team, the Los Angeles Clippers, has turned into a bit of a force off the bench.

“Cole just knows who he is,” Rivers said. “He has this body, and he uses it. He doesn’t try to beat you athletically; he just gets his body in the right positions. He rolls to the right spot.”

Aldrich is doing more than just providing a large, warm body in the paint. The burly 27-year-old center, who has averaged 3.3 points and 3.5 rebounds while playing for five different franchises in his career, has actually been an effective piece of the Clippers’ offense, too.

Clippers are successfully running their offense through Cole Aldrich

Since Rivers began using Aldrich more, in a 1-point loss to Oklahoma City on Dec. 21, the Clippers are 11-2. In January, Aldrich is averaging 9.4 points and 6.1 rebounds, while making 54% of his shots in just 15.7 minutes an outing.

Aldrich’s recent success obviously has been a direct result of more minutes. But injuries to other Clippers played a part in his prolonged opportunity. All-star forward Blake Griffin hasn’t played since Christmas, due to a quad injury, opening up minutes in Rivers’ rotation.

"These guys missing games is giving other guys an opportunity to build their confidence," Paul said, "and that way when they come back it just adds that much more depth to our team."

On Saturday in a loss to Sacramento, Aldrich didn’t look so hot to start the game, missing 6 of his first 7 shots. But he showed Rivers and his teammates something by making his final 7 shot attempts, on his way to 19 points and 10 boards.

“Well, he had to have it,” Rivers said to the Los Angeles Daily News of Aldrich’s strong finish, “because he missed some, as we did as a team, he missed some pretty point-blank looks, and so he’s been pretty persistent.”

Rivers praised Aldrich for his professionalism, and being ready to contribute to the team after not playing at all in 22 games earlier this season.

“Never stopped working,” the coach added of Aldrich, “actually worked himself into better shape in not playing, which is hard to do. So I think that says a lot about his character.”

Aldrich told the L.A. Daily News he knows how to star in his role, by doing the most with his abilities.

“I mean, I know that my role is to set screens, roll hard,” the backup big man said, “if given the opportunity to make some buckets, make them and then just defend the rim.”

“I mean, you couldn’t find anybody on our team that could say something bad about Cole,” Paul said.

Then again, when Aldrich lets his goofy side out, all of his teammates don’t mind telling him what an awful dancer he is.

Haha somebody help my boy Cole get some dance moves 😂😭! Lol but way to play big fella. Clips going to keep this thing rolling 💯

At least Aldrich owns it. Just like he does his backup role.

Guess the cat is out of the bag. The nostalgia of my amazing dancing has gone viral. You welcome non-dancers. @AustinRivers25

Keep it up Cole! Congratulations.