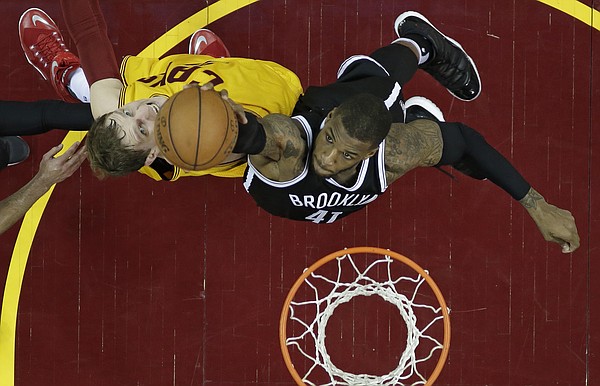 Cleveland Cavaliers' Timofey Mozgov, left, from Russia, and Brooklyn Nets' Thomas Robinson battle for a rebound in the second half of an NBA basketball game Thursday, March 31, 2016, in Cleveland. (AP Photo/Tony Dejak)

The fifth overall pick in the 2012 NBA Draft, Robinson spent all of last season with Brooklyn, a rarity for the backup power forward who already has played for five different franchises.

If demand for his services was high enough, Robinson already would have signed a new contract. Still, a report from BasketballInsiders.com suggests the 25-year-old big man also wants to take his time and find the right fit. After all, neither Sacramento, Houston, Portland, Philadelphia nor Brooklyn worked out for Robinson, who left KU with so much promise.

In Robinson’s rookie season with the Kings, he averaged 4.8 points and 4.7 rebounds in 51 games. Then Sacramento traded him to Houston, where, in 19 games, Robinson averaged 4.5 points and 4.1 rebounds.

Year No. 2 in the NBA for Robinson, while more stable — thanks to Portland adding him in the offseason and keeping him around for the duration of the year — didn’t bring more production: 4.8 points, 4.4 rebounds.

In 2014-15, Robinson was back on the move, but at least got to better show off his skills on an awful Philadelphia team, averaging 8.8 points and 7.7 rebounds in 22 appearances after the trade deadline.

However, after signing as a free agent with Brooklyn last summer, Robinson only got to play 12.9 minutes, putting up 4.3 points and 5.1 boards in his most recent campaign.

All of those stops around the league and tough lessons learned along the way have changed Robinson’s approach, he told Basketball Insiders. Now he understands he can still make an impact in the NBA, and earn the respect of his peers, by becoming a reliable, role-playing big, such as Bismack Biyombo or Tristan Thompson.

“I’ve matured so much,” Robinson said. “I see things completely different now. Coming in young, I’ll be honest, I didn’t want to hear, ‘Be a defender! Be a rebounder! That’s all you need to do!’ I didn’t want to hear those things. I’m okay at doing things other than just rebounding and defending, so I didn’t want to just do that. But after all of the trades and constantly hearing that, it sold me. I think the biggest sign of my maturity is the fact that I’m not striving for the same things that I was when I came into the league.”

The former King, Rocket, Blazer, Sixer and Net no longer has visions of becoming a superstar or, as he put it, trying to play like Kobe Bryant.

“I know that my job is strictly to be a solid rebounder and defender. I want to make it clear to everybody: that’s all I want to do,” Robinson told Basketball Insiders. “I want to be one of the best rebounders in the league and lock down anyone who comes my way.”

Alex Kennedy of Basketball Insiders suggests Robinson just needs minutes in order to produce, citing the athletic forward’s averages in seven starts for the Nets this past season: 14.6 points, 12.3 rebounds, 2.0 assists and 1.6 steal to go with 54.4% shooting.

And while Robinson himself admits some people around the NBA might have a misinformed opinion of him — that he’s “standoffish” or a bad person — some of his former co-workers gave him glowing reviews. On BasketballInsiders.com coaches and players used words such as “coachable,” “I loved working with him,” “great competitor,” “fearless rebounder,” and “always a very positive teammate” while describing the free-agent power forward.

Portland guard C.J. McCollum said he connected with “T-Rob” easily, because of the big man’s passion.

“I think he can help every team in this league with his skill set and motor,” McCollum added. “He just needs to get the right opportunity.”

So where will Robinson play in his fifth NBA season? Many teams have used up the bulk of their space under the league’s salary cap. According to sportrac.com, the organizations that still have plenty of wiggle room for larger contracts are Philadelphia, Denver, Brooklyn, Phoenix, Oklahoma City, Utah, Minnesota and Indiana. Now, that doesn’t mean those teams have the roster space or a need for Robinson. They could just afford to pay him more.

Other franchises, though, could still bring Robinson in on a veteran’s minimum deal. One such team reported to have interest in Robinson is the San Antonio Spurs.

My understanding is Spurs have been most vocal about Robinson... https://t.co/MI2YxDAmTB

None by Steve Kyler

Training camp doesn’t open until September, so there is still plenty of time for Robinson to find a new (or perhaps former) team to join.

I would love for Trob to end up with the Spurs or even back with the Blazers, but my main hope is that OKC comes knocking -- he would make such a great compliment to Westbrook and a powerful frontcourt mate for Steven Adams. I think the Thunder should go all in trying to make the team an extension of Thunder Russ.

I want to see T-Rob succeed so badly!