Through the years, NBA veteran Paul Pierce made a name for himself by coming through in the playoffs.

In the 2008 postseason alone, the former Kansas star scored 20-plus points 11 times. Pierce went for 41 points in a series-clinching victory over LeBron James and Cleveland, scored 27 points in the decisive game of the Eastern Conference Finals against Detroit and went on to be named NBA Finals MVP, as Boston defeated the Los Angeles Lakers.

Now in his 18th season, with 159 playoff games behind him, the cagy small forward known as “The Truth” went through a whole new postseason experience in the L.A. Clippers’ Game 2 victory over Portland. For the first time in his illustrious career, Pierce watched an NBA playoff game from the bench, and never checked in.

It almost seems impossible for a player of Pierce’s stature. He has averaged 19.8 points in the playoffs for his career — Pierce even scored 14.6 a game for Washington one year ago. Still, next to his name in the box score it read: DNP-Coach’s Decision. 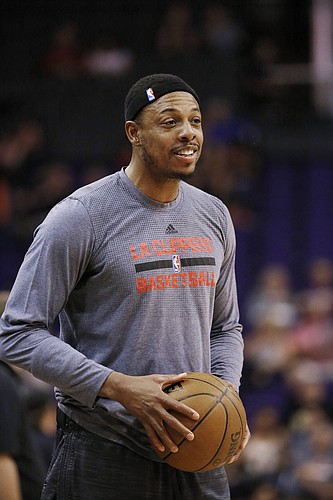 This came three days after Pierce played just 11 minutes, made 1 of 2 shots and had an assist in a Game 1 win.

The 38-year-old future hall-of-famer spoke about the unprecedented move with Chris Mannix, for Yahoo’s NBA site, The Vertical.

"It is what it is. It's difficult,” Pierce said. “As a competitor, you want to compete and help your team win. A close game – I've been in those situations lots of times. When you have competed at a high level, it's difficult."

Clippers coach Doc Rivers, who coached Pierce with the Celtics and is well aware of the aging small forward’s ability to come through in the clutch, told The Vertical he almost subbed Pierce in against the Trail Blazers in Game 2.

"A guy like Paul,” Rivers said, “you always want to use him."

Pierce, of course, isn’t nearly as lethal as he used to be. With more than 47,000 minutes on his NBA odometer, no one would expect him to start at this stage of his career and come out and score 30 points.

But he can still play. Earlier this month, Pierce scored 18 points and shot 4-for-5 from 3-point range in a Clippers win at Utah.

According to Mannix’s report, Rivers is just having trouble finding minutes for Pierce because the Clippers’ bench unit began to flourish, oddly enough, when Pierce moved into the starting lineup in place of injured Blake Griffin. Once Griffin returned, Rivers didn’t want to hinder the progress of backups Jeff Green, Wesley Johnson, Jamal Crawford and Austin Rivers, all of whom had played well, along with former KU big man Cole Aldrich.

Pierce, though more accomplished than all of those role players combined, became the odd man out.

Still, Pierce remains a valuable part of the team. According to The Vertical, all-stars Griffin and Chris Paul trust him and look to him for guidance.

Plus, Rivers predicts we haven’t seen the last of Pierce this postseason.

"He's going to help us," Rivers said. "I have no doubt about that. There's a lot left in him."

But will this, Pierce’s 13th trip to the NBA Playoffs, be his last? He signed a three-year deal with the Clippers last summer, but Pierce has contemplated calling it a career before.

"The last few years it has been an end-of-the-season decision," Pierce told The Vertical. "I'll make that decision after this season, too"

Before that day comes, maybe Pierce will remind the league he still can play the role of playoff hero.

Best sports quote ever - from the Big Aristotle -

Obviously they don't play the same position, but theoretically it will push Doc to go deeper into the bench. I'd guess that Austin Rivers would slide in at starting PG, and 6th man extraordinaire Jamal Crawford will be forced into more action backing up all three guard positions. Making Paul Pierce a candidate to fill in at the 3. I'm not sure if he's played more at the 3 this year or as a small ball 4, but I'd expect him to pick up a bigger role with Paul likely done for the season.

Doc, look down the bench and call the old man's number. What do you have to lose? It will give everyone more confidence to have Paul out there. What he has lost in steps, he can make up in old school craftiness. "Truth! You're up. Get in there!"