No rookie enters the NBA expecting to spend most of his initial season watching from the bench. Still, that’s the reality of the league — even for many first-round picks.

Such was the case for one-and-done Kansas wing Kelly Oubre Jr., whose first go-round in The Association came to a close Wednesday.

Oubre’s name won’t appear on any All-Rookie team ballots — not after playing just 10.7 minutes a game in 63 appearances for Washington, which, despite postseason expectations finished 41-41, three games out of the eighth and final playoff spot in the Eastern Conference. 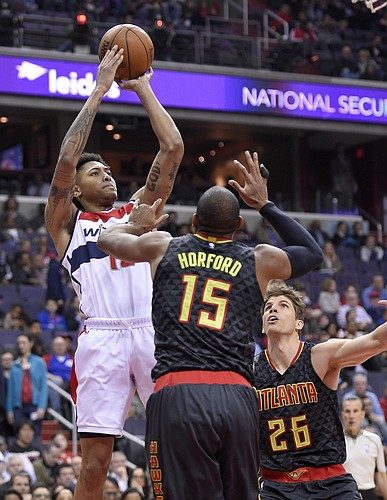 At the time, Oubre told The Washington Post’s Jorge Castillo, he thought more would come in the months ahead.

“I was feeling like, ‘I’ve showed I can be in this rotation,’ ” Oubre said. “I can hold my own, so we’ll see what happens next. . . . I was like, I should be able to crack the rotation and be able to play and sustain the whole year.”

However, he only started four more times — going scoreless in the final two such occasions in late January.

The Wizards, according to The Post, had no plan to heavily involve Oubre in the rotation for 2015-16. Castillo reported Oubre would have spent time in the D-League if Washington’s injury issues hadn’t required the organization to keep him on the roster.

With the Wizards unexpectedly out of the playoff picture the final week of the regular season (leading to Wittman’s firing Thursday), Oubre played 20-plus minutes for the first time in nearly three months (a stretch that included 12 DNP’s).

The 20-year-old responded to his suddenly increased role Monday by scoring 14 points on 6-for-10 shooting on the road against Brooklyn, which finished with the third-worst record in the NBA (21-61).

“You saw how I swagged it out a little bit?” Oubre asked afterward, referring to his buzzer-beating 3-pointer to close the first half.

Two days later, in Washington’s finale, Oubre scored 6 points on 3-for-8 shooting in 25 minutes off the bench.

Always confident, and oozing good vibes (as evidenced by his “Wave Papi” social media pseudonym), Oubre, the 15th pick in the 2015 draft, thought he had a solid first campaign.

Individual success is all relative in the NBA. And at least one of Oubre’s teammates, guard Garrett Temple, described to The Post what stood out about the young wing.

“Just his willingness to learn as a draft pick that high that hasn’t been able to play as much,” Temple said. “He was in and out of the lineup, but he was always professional. Getting his work in every day, looking up to guys, asking questions. Being a sponge. It was a successful season in that regard.”

Good luck to Oubre. I hope next season provides even more opportunity for him. FCJH!

Well riding the pine in college is one thing but who would mind the pro pine if your salary is close to 2 million. Even the guys that didn't get drafted like our ole guy Alexander playing for the Blazers from Portland. His mama can pay off that loan and have plenty to spare.

KO is just all talk. He needs to let his play do his talking. Given his attitude, if he keeps this up, he won't go far.

I hope he improves his game and has success. Wasn't impressed with his skills/production at KU or this season either. Not sure he 'gets it' how hard players have to work to earn minutes, but I hope he figures it out. Perfect reason he should have played another year in college to grow his game and grow up.

Like I said - there are exceptions (LeBron comes to mind)

I think guys going out early that are not legitimate stars on their college team (Oubre, Josh Shelby, Darrell Arthur, and now Cheick Diallo) really hurt themselves by getting lured by the big money and not adequately preparing themselves for the NBA. Stay another year or two. Get some great experience, have time in the competition and then go into the NBA and do great.

That's nice sentiment but the figures swing both ways. Most of the top paid players are OAD or didn't play college ball...

"I think guys going out early that are not legitimate stars on their college team (Oubre, Josh Shelby, Darrell Arthur, and now Cheick Diallo) really hurt themselves by getting lured by the big money and not adequately preparing themselves for the NBA."

Agree, Matt. But another reason to stay in school--like Hield, ELLIS, Niang, Svi, and a host of many others--is so that your payday can improve by being drafted higher. Even people who were probably projected as high draftees have come back to school for these reasons. The twins at Kentucky, Harrison Barnes, Wayne Selden, and many others.

In my opinion, money is the MAIN reason to come back to school, but gaining confidence at one level before tackling the next is also a good reason.

Spot on. It's an investment in yourself. I'd throw Xavier Henry & Julian Wright in that mix. But look at Heinrich, Ostertag, Pollard, three guys with long NBA careers that weren't superstars, but very dependable bench players when starters needed rest or were injured.

Someone like T-Rob who left one year early made the right choice, I don't know if his stock would have been any higher after another year. Someone like Cliff who wasn't ready, unfortunately didn't have a choice due to that morass he fell into.

Anyway, I'm selfish. They should stay at KU to win Championships, not go and make tens of millions of dollars. :-)

Kirk Hinrich has been a starter for the majority of his NBA career. But there are a couple of differences between him and someone like Oubre. He played 4 years in college, not one, so he was more prepared for the NBA. And he was a high lottery pick, so he was expected to have a good career.

In general, the KU players who have had the best NBA careers are guys that played at least 3 years in college. Even Paul Pierce stayed 3 years. There are exceptions -- Andrew Wiggins had little trouble transitioning from college to the NBA despite playing just one year at KU. But that's rare.

Bottom line is, no matter how long you stay in college or where you are drafted, it is unlikely someone is going to become an NBA superstar. Or even an All-Star. Even great college players tend to end up having careers more like Kirk Hinrich than like Kevin Durant. Seems like everyone is in too much of a hurry to get that million dollar contract. But you better have a backup plan in place if you don't get drafted in the first round, or if you don't stick in the NBA.

Facts unfortunately run counter to your opinion again Joe.. The highest paid players are virtually all OAD or didn't play in college.

If there's anything that's proven though, it's that reality won't sway you from offering the same opinion over and over....

Do you have some Bible verses or music lyrics that help camouflage your lack of substance?

Smart man, Armen! We agree that it's situational and dependent upon individual factors. There is no hard and fast rule that says all players should stay or all players should go. When I was in grad school everyone who made it there was a top dog at their college, but in the rigor of advanced academia, you certainly found out that among the top tier there exists a spectrum of intellect that ranges from low to high. The draft is no different. Some OADs who are drafted represent the cream of the cream, while other phenomenal talents still need polishing to be impact players at the next level. I think that polishing certainly can be done in the NBA, but the forfeiture of a higher payday is definitely a justifiable reason to return, work on their game, and jockey for a higher draft position. This is not a point that needs to be defended as examples abound.

By the way, every time I see your name it reminds me of Armen Keteyian. Not quite the spot on match of Perry Ellis (basketball player) and the man of the clothing line with the same name, but you get the idea.

Was not impressed at all with oubre's play at KU, and I think that he certainly jumped way too early to the pros. It might have got him a juicy contract in the short term, but will definitely hurt his career in the long term