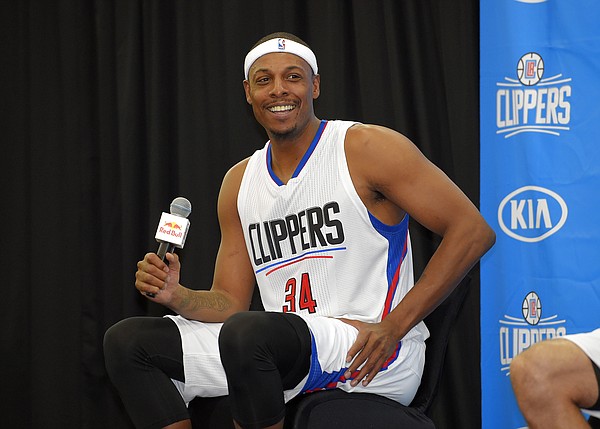 During the past few days, players for the NBA’s 30 franchises posed for photos, answered questions and took in media day festivities with varying degrees of seriousness.

That means it’s time to get the old ’Hawks in the NBA blog up and firing again. At this moment 19 former Kansas players draw paychecks in The Association, and they all — well, almost all of them — had their moments in the spotlight at media days.

From rookies just getting started, to veterans joining new teams to role players fitting in, here are some of the KU-related social media highlights from around the league.

None by Justin Russo

Rookie Cliff Alexander getting a first taste of NBA life at #BlazersMediaDay pic.twitter.com/NHPRDggJFs

None by Tim Brown

None by Tim Brown

Darrell Arthur says he was close to signing with clippers ... Felt he could help more with nuggets... pic.twitter.com/yNUmR6ih04

None by Patrick Graham

There's a new reporter in the house. Darrell Arthur! pic.twitter.com/WE2zPOT64s

None by Denver Stiffs

None by Ryan Ward

None by Eric Pincus

Spo on @mchalmers15: "He's had a very good summer. He's motivated to be a part of a team that has an opportunity."

Spo on @mchalmers15: "He's had a very good summer. He's motivated to be a part of a team that has an opportunity."

In case you were wondering, “Spo” is Miami coach Erik Spoelstra, and Chalmers’ “new role” will be him coming off the bench.

"I hope guys think I have an authentic approach to being a teammate" @nickcollison4 pic.twitter.com/PViAcPUADX

None by The Franchise Sports

Nick Collison... "The goal here definitely is to win a championship". #thunder

None by Curtis Fitzpatrick

If you were curious about how Joel Embiid is handling his ongoing injury and rehab process, you’re not alone.

Appropriately enough, the injured-for-another-entire-season Embiid wasn’t a part of the 76ers’ media day, according to The Inquirer’s Keith Pompey.

Presumably, he’ll attend a media day and play in the NBA one of these years.

Before looking for Drew Gooden content, I thought, What’s that maniac up to?

@DrewGooden wanted this background because he said it "brings out the aquatic hues in his retinas" #Wizards #MediaDay pic.twitter.com/Esc4O3pmCQ

That dude has to be a blast to cover. Rarely not entertaining.

None by Chicago Bulls

None by The Bulls Charge

Ben McLemore showing off his ball handling while posing for photos during media day. pic.twitter.com/vUzGEQy9OX

None by Ailene Voisin

The Pistons’ Twitter account did a tweet Q&A with a number of Detroit players Monday, but apparently Marcus bounced before they could get one rolling with him.

Marcus had to run, but we have @CartierMartin here now! #Pistonsmediaday

As a side note, ESPN’s NBA folks ranked Marcus Morris as the 191st-best player in the league. So there’s that.

By far the biggest ’Hawks in the NBA news to come out of media days was presumably disgruntled forward Markieff Morris putting on a happy face and stating he wants to be in Phoenix.

Markieff Morris: "I want to be here." He said he doesn't want to talk about the past (summer issues with the Suns). pic.twitter.com/AAMf7xVQmY

That’s not what he was saying back in August, when he told The Inquirer’s Keith Pompey: “One thing for sure, I am not going to be there.”

At the time at least, Markieff was hot and bothered about Phoenix shipping his twin brother and roommate Marcus off to the Pistons. He still might be a little sour with Suns general manager Ryan McDonough about that transaction.

Markieff Morris left the podium and gave Jeff Hornacek a high-five and a hug. Didn't look at Ryan McDonough though.

Blatt jokes that signing of Sasha Kaun does not mean he's "trying to recreate the Russian National team." #Cavs

None by Tom Withers

Kelly Oubre’s first #WizMediaDay. He’s got that “you want me to talk to all these people?” face #wizardstalk pic.twitter.com/9vm7coEbWx

None by CSN Wizards

Looks like Kelly Oubre Jr. loosened up and got comfortable at the Wizards’ media day.

None by Monumental Network

#Shootaround: @paulpierce34 knows what he's likely to do if he helps @LAClippers win a title. http://t.co/anwi5OL59e pic.twitter.com/nUKAnyFz4P

None by SLAM Magazine

Yes, Brandon Rush won an NBA championship with the Warriors. But, no, there isn’t a lot of media interest in him out in Oakland.

Upon posting this blog, Rush hadn't appeared in any Golden State tweets — or, really, anywhere else in the Twitterverse.

None by Steve McPherson

Unlike Marcus Morris, the 2014-15 Rookie of the Year was able to answer a few questions on Twitter.

Man, we have a TON of guys in the league. That list just kept coming!

yep..now only if they did something worthwhile in the nba than riding the bench (i'm talking all stars).

We rode the PP train for way too long. need a new poster child. i'm looking at you wiggins.

Oubre might come around and make some noise over time, but that's about it. Unfortunately, I'd have to say the next big NBA star from KU hasn't evened signed a LOI yet... HOWEVER, I am very impressed by this list. If anything, it should show prospective players that if they come to KU they will learn to play the game the right way, and even if they aren't all-stars, they can collect million+ dollar checks for many many years in the L.

Andrew Wiggins is going to be an all-star. And if — monumental IF — Joel Embiid ever gets healthy... guy could be a monster.