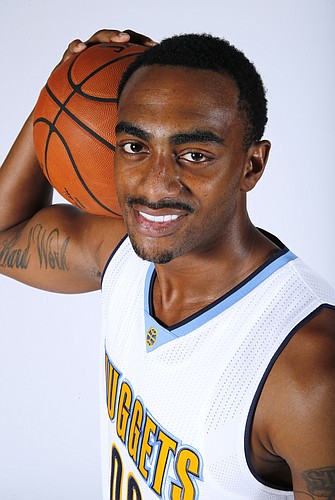 Although injuries kept him out of 22 games last season, the Denver Nuggets didn’t mind bringing back a trustworthy backup big man in Darrell Arthur.

The former Kansas power forward re-signed with the Nuggets this past summer and now figures to play a significant role for new head coach Mike Malone.

Never one to blow away fans with his stats — Arthur averaged 6.6 points, 2.9 rebounds, 0.8 steals and 0.4 blocks, and made 40.4% of his field goals in 2014-15 — the 6-foot-9 post player is known for playing sound defense on the perimeter and interior. Arthur wins over coaches with footwork and effort, not blocks and steals. He is long and knows how to defend the pick-and-roll, which makes him valuable on any roster.

A backup to Denver’s starting power forward, Kenneth Faried, Arthur spoke with the Denver Post about how the Nuggets will change their approach, under Malone, known to be defensive-minded.

“This is the way I was taught to play. I'm pretty sure this is the right way to play basketball,” Arthur said. “He's doing a great job of teaching everyone, not just the young guys. He's refreshing the older guys on positioning on defense. Offense too. But defense leads to great offense, and we've been doing a (heck of a) job during the preseason so far.”

A bruised right knee kept Arthur out of Malone’s lineup most of the preseason, but he was able to play 20 minutes in the Nuggets’ final tuneup. He spoke on media day (before that minor setback) about his frustrations with last season and getting banged up.

"I really can't control the injury thing,” he said. “I’ve been in the gym working on the strength of my legs.”

A role player who understands what he can and can’t bring to an NBA court, Arthur said he will play whatever front court position Malone wants to use him at and revealed he spent the summer trying to become a better 3-point shooter from the corners. A wise move, as the game seems to demand more and more of its big men stretch the floor.

If Arthur can add that 3-point wrinkle to his overall repertoire, maybe he’ll play even more of a factor for the rebuilding Nuggets (30-52 last year).