Year No. 3 off to troubling start for Ben McLemore 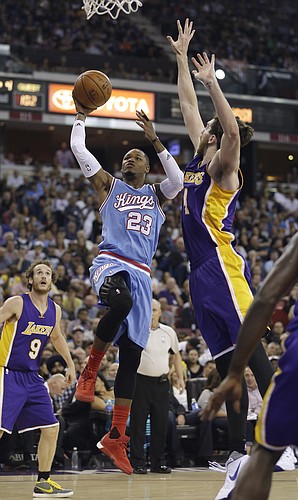 Sure, the 82-game grind that is the NBA season barely has begun. But so far, there are some signs that third-year shooting guard Ben McLemore could be in for a disappointing season.

Really, issues began to emerge in the preseason, when the 2013 one-and-done lottery pick out of Kansas only hit 27 percent of his shots for Sacramento. That led to Kings coach George Karl saying in a post from Sactown Royalty that he wished McLemore would have played better.

“But he's a young guy that I think it's the first time he has a competitive situation for minutes. In the end, it will make him a much better player," Karl said. "He might not enjoy it as much if he doesn't play. I mean, he played 2,600 minutes last year. I don't think Ben is going to play 2,600 minutes on this team."

When the man in charge of minutes predicts a decrease in minutes, that’s kind of a red flag.

Sacramento improved its depth in the offseason, and with Marco Belinelli an option at shooting guard, it’s clear Karl won’t stick with McLemore just to see how it goes.

Karl also said before the season started McLemore could turn out to be an important part of the rotation. But the coach then basically said the 6-foot-5 shooting guard hasn’t picked up on all of the offensive concepts Sacramento uses.

"I think our style is to play random, equal opportunity, flow basketball and so maybe the veteran guys or the guys that have what I call savvy, knowing how to get open, when to get open, when to cut, when not to cut. I think Ben might be below the curve of that," Karl said. "But that's a young player searching for the betterment of his skills."

Ben McLemore playing 19 minutes per game and barely being involved in the offense is...not great?

None by Zach Lowe

In Sacramento’s most recent loss Tuesday night, versus Memphis, McLemore’s stat line looked like this:

A report Wednesday from KFBK radio cited sources around the team and said McLemore wouldn’t start the Kings’ next game.

There is plenty of season left, and more than enough time for McLemore to break out of his slump and get acclimated with Karl’s offense. But Karl wasn’t around when Sacramento drafted McLemore and has no incentive to play him more if he deems doing so is harming the Kings’ chances of winning.

This is a situation McLemore fans will want to keep their eyes on.

Sucks to hear that. Hope you bounce back, Ben. Sac-town just hasn't been a great destination for Jayhawks, though.

Has it been that great of a destination for any players? Maybe Mitch Richmond from K State but after they left Kansas City they really haven't done much have they? Realistically what have they done since they were the Rochester Royals in 1951?? The answer: not much.

Pollard did alright out there, for a bench player. From 2000-2005, they finished first or second in their division and played in the Western Conference Semis or Finals each one of those seasons.

Ryan Robertson played his one and only NBA game with the Kings......