Paul Pierce would fit in nicely with Clippers next season 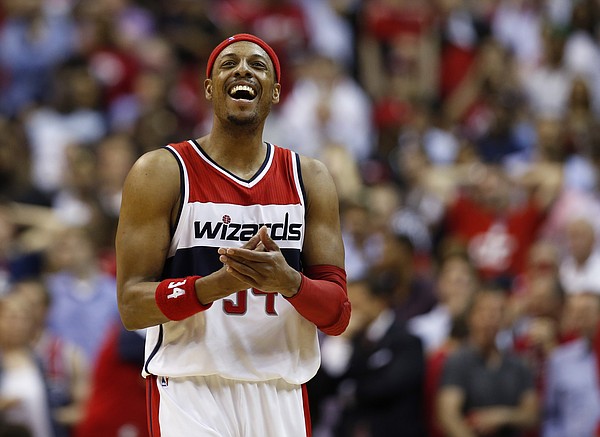 Washington Wizards forward Paul Pierce (34) reacts in the second half of Game 4 of the second round of the NBA basketball playoffs against the Atlanta Hawks, Monday, May 11, 2015, in Washington. The Hawks won 106-101. (AP Photo/Alex Brandon)

Paul Pierce proved in the 2015 NBA Playoffs he’s still relevant in the league, even with 17 seasons of mileage on his veteran frame.

The 37-year-old small forward from Kansas scored 14.6 points per game and drilled 33 of his 63 3-pointers (52.4%) for Washington in the postseason before Atlanta eliminated the Wizards in the second round, leading Pierce to say his offseason plans would include contemplating retirement.

It turns out those within NBA circles, though, anticipate “The Truth” returning for Year No. 18 — and playing for a different organization.

David Aldridge reported on NBA.com “many around the league” think Pierce will finish his career in Los Angeles, with the Clippers. Though the former Boston star, who also spent one season with Brooklyn, signed a two-year deal with Washington this past summer, he can opt out of the contract and become a free agent again in July if he so chooses.

The Clippers make perfect sense as a potential destination for Pierce. He grew up in nearby Inglewood, California, and won the 2008 NBA championship with current L.A. coach Doc Rivers. Plus, with younger stars Chris Paul and Blake Griffin carrying the Clippers, Rivers easily could use Pierce in a reduced role during the regular season — Washington used a similar approach — to save his legs for when they need them the most. 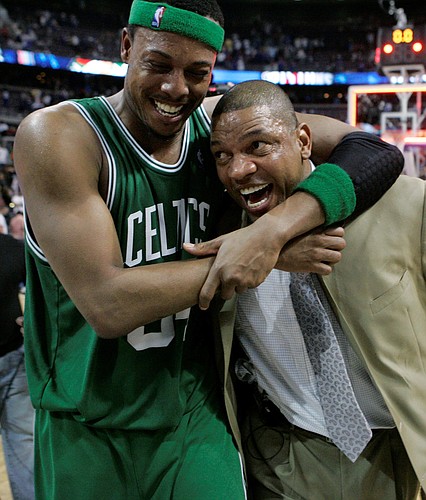 Then again, if Pierce indeed becomes a free agent, who’s to say he wouldn’t join another franchise? Celtics guard Avery Bradley told 98.5 Sports Hub he would love to see his former Boston teammate back in Celtics green.

“To me, Paul is always going to be a Boston Celtic,” Bradley said. “The things that he’s been able to accomplish in his time here, it was just amazing. And I’m pretty sure all the Boston fans would love that, too.”

Boston, coached by Brad Stevens, surprised the league this past season by reaching the playoffs, despite trading away veterans Jeff Green and Rajon Rondo. The Celtics became one of the more competitive teams in the NBA the final three months of the season and won eight of their final 10 games to grab the No. 7 seed in the Eastern Conference.

Pierce’s former franchise is trending upward, but the current roster wouldn’t contend for a title, even with the addition of No. 34. Boston would need to make a few more moves and bring in an all-star or two before Pierce could return knowing he had a chance to get back to the NBA Finals.

No road to the championship is easy, but for Pierce, returning to Washington or joining the Clippers would provide paths with fewer obstacles.

The Wizards came close to reaching the East finals this season, and his young teammates John Wall, Bradley Beal and Otto Porter all showed serious improvement. It’s easy to envision D.C. taking another step forward in 2016. But if Pierce stays in the East, he’ll have to go through his old rival, LeBron James, to reach The Finals.

The Clippers had Houston on the ropes and blew a huge lead in Game 6 of the second round before their season ended on the road, in Game 7, against the Rockets. Even though the West is loaded, L.A. has the star power of Paul and Griffin, who could propel the franchise to an unprecedented Finals appearance in 2016 — especially if the Clippers re-sign DeAndre Jordan and add some more complimentary pieces.

Ultimately, the lack of a supporting cast led to L.A.’s demise. Griffin and Paul had to carry the load so much, the fatigue caught up with them late in the Houston series. Pierce isn’t the same defender he was earlier in his career, so he wouldn’t be the perfect “3-and-D” wing for the Clippers. But he could lessen the offensive burden placed on the shoulders of Griffin and Paul, particularly late in games.

After so many seasons in Boston green, Pierce has become a bit of a hired gun late in his career. Why not make one last run at a championship with your old coach in your home town? 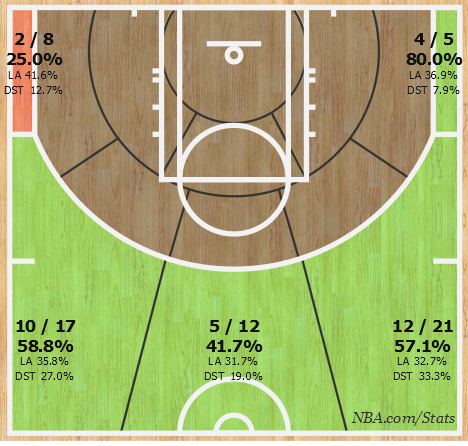 Truthfully, Pierce would look good in a Clippers uniform. With him camping out behind the 3-point line on one side of the court, and J.J. Redick doing the same on the opposite side, imagine the extra room Paul and Griffin (and Jordan?) would have to operate.

And if defenses decide to focus on L.A.’s stars, Pierce will be there licking his lips, waiting to deliver a crunch-time dagger.