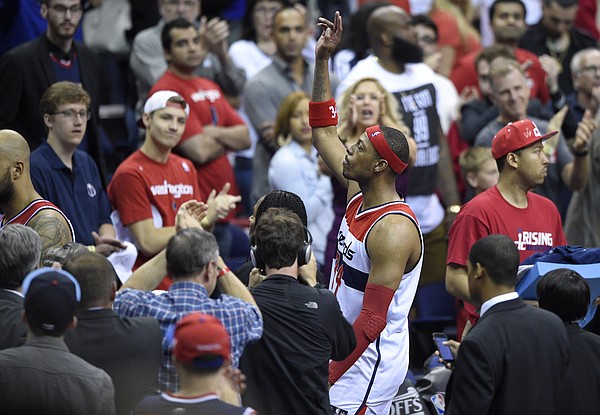 Washington Wizards forward Paul Pierce (34) waves to the crowd as he leaves the court after Game 6 of the second round of the NBA basketball playoffs Atlanta Hawks, Friday, May 15, 2015, in Washington. The Hawks won 94-91. (AP Photo/Nick Wass)

The Verizon Center crowd exploded, and Pierce’s Wizards teammates congratulated him on sending Game 6 against Atlanta to overtime.

However, upon further review, the ball left the veteran’s fingertips a split-second too late. “The Truth” had not saved the day this time, and the Hawks advanced to the Eastern Conference Finals.

The stunned 17-year veteran from Kansas left the court afflicted with the feeling he let his team down, and, as he told The Washington Post’s Adam Kilgore, wondering about his future.

“Truthfully, what was going through my mind is, I don’t have too much of these efforts left, if any,” Pierce said. “These rides throughout the NBA season, throughout the playoffs, are very emotional. They take a lot out of not only your body, but your mind, your spirit.”

None by Dan Worthington

Pierce averaged 14.6 points and drained 52.4% of his 3-pointers in the playoffs, but finished what proved to be the season finale with 4 points on 1-for-7 shooting (0-for-2 from downtown). No competitor of Pierce’s caliber would want to walk away from the game on that note, particularly after having a clutch shot waved off, but it’s an option the 2008 Finals MVP finds himself considering.

As Kilgore reported, Pierce has a player option for next season on his contract worth $6 million dollars. Will he take it, extend his late-career sting with the Wizards and play an 18th season?

“I don’t even know if I’m going to play basketball anymore,” Pierce told The Washington Post.

The veteran revealed the emotions of the season-ending loss in many of his post-game comments.

“It affects not only you, but the people around you,” Pierce said. “Days like this, you go home and you’re around your family, you don’t feel like talking to them or doing anything because of what the game does. It takes a bit out of you.”

Retirement is on the table for the future Hall of Famer now, and Pierce said calling it quits — whether it comes this offseason or down the road — will probably be the hardest thing he ever has to do.

“I’m never going to have no regrets, whether I hang it up now or later,” Pierce said. “I know that people who have been around me all these years know that Paul Pierce came every day, left it out there every day. I know I left everything out there.”

The Truth. No nickname ever fit better, except maybe Stockton's lack of one.

What wonderful years KU had when Paul played at Kansas. What ever he decides, best wishes for his future. Maybe, he can be an assistant big man's coach at KU.

Such a shame that he didn't stay for the '98 season with KU. What a difference he could have made.