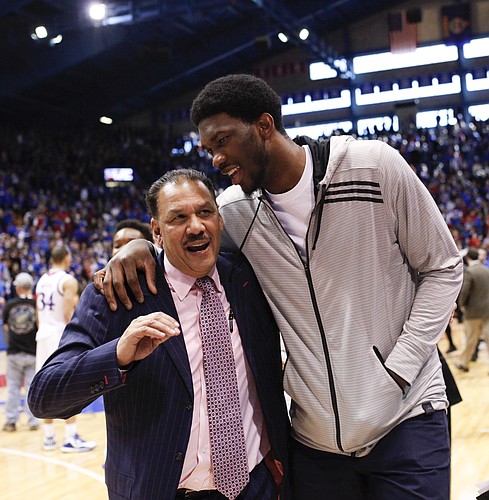 Joel Embiid has yet to play a game in the NBA for Philadelphia, but the No. 3 overall pick in the 2014 draft already has dabbled in coaching, scouting and interviewing prospects.

During the final week of the 76ers’ 18-64 season, coach Brett Brown let the one-and-done center from Kansas draw up a play in a timeout.

Thursday in Chicago, Brown and the Philadelphia brain trust had Embiid in tow at the Draft Combine. The 21-year-old 7-footer watched this year’s crop of incoming rookies run through drills and scrimmages and even sat in on interviews with potential draftees.

The Sixers’ head coach told the Philadelphia Daily News he thought bringing a young player with the franchise’s decision-makers was a unique and great idea. On-76ers-Meetings-With-Prospects-At-Combine

"He gets a chance to talk to the guys who may be his future teammates,” Brown said. “He gets to listen to the answers to the questions that we ask, whether it be about their character, work ethic, whatever it may be.”

Philadelphia’s coach went on to call the 7-footer from Cameroon the franchise’s cornerstone.

“We want him being involved in our decisions moving forward,” Brown told the Philadelphia Daily News. “We're all in this together, and Jo knows that he is a very big piece for all of us moving forward. The more we can get him involved in everything is just better for everyone. I think this is the first time anyone has done anything like this."

Embiid didn’t attend last year’s combine, which has become common practice for the elite rookies in each class. CSNPhilly.com’s John Gonzalez reported the young big man asked Brown and Sixers general manager Sam Hinkie if he could tag along this week.

“I think that for him to come here to Chicago and share in the selection and opinions of people that we may draft is an impressive quality that he has shown us,” Brown told CSNPhilly.com.

The agenda also included non-combine activities, such as individual workouts and weight-lifting sessions for Embiid, but the highlight of the trip to Chicago had to be sitting in with his bosses as Philadelphia’s contingent interviewed his potential future teammates.

As you might imagine, the participation of Philly's player/coach/scout caught some prospects off guard. But Arizona’s Stanley Johnson told CSNPhilly.com the addition Embiid’s presence helped him feel at ease.

“It was fun because I got to have some dialogue with him,” Johnson said. “Jo Jo is always playing around. You know that.”

.@Original_Turner on how his skill set fits with the Sixers... ...And the first question @JoelEmbiid asked. https://t.co/DlYS5JRyBR

“His first question was: Why didn’t you go to Kansas?” Turner said, laughing.

Brown enjoyed every minute of keeping his young center involved as the Sixers put potential draftees on the hot seat.

“I just think it's healthy,” Brown told CSNPhilly.com, “and I think it's got to be accumulative effort that we're putting out there where these guys have a say in the design and the growth of their own program."

It will be so cool if Jo can stay healthy. If he can, I think he can become a superstar in time. He jokes around a lot, but when he plays he can get mean. No kidding.

Good for Joel. Best wishes for his future success.

I think this kid will do a lot for KU in his future.

i hope so..he sure as hell didn't do what he was supposed to do while @ KU

Not sure how you can say that when injuries kept him from playing. It isn't like Embiid quit on his teammates because he was unhappy about playing time or because he wasn't getting the ball. I would argue that he did more for Kansas in his one year than Wiggins did.

Only in America can a young guy from a foreign country get paid millions of dollars and not have to play a minute of basketball.