Ben McLemore shows improvement in Year 2, and stands out in community 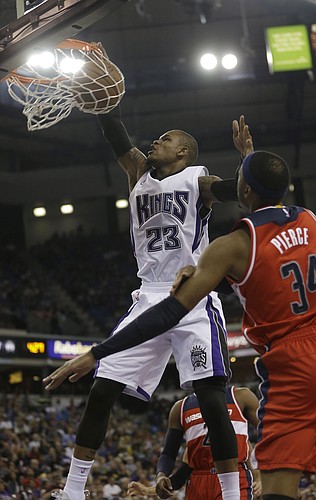 It can’t be easy playing for the Sacramento Kings right now.

An afterthought of an NBA franchise since the early 2000’s and the glory days of Chris Webber and Mike Bibby, the Kings haven’t reached the playoffs since 2006. They went through another lackluster season (29-53) in 2014-15, marred by an organization-inflicted coaching carousel that forced the players to take the floor under three different leaders: Mike Malone (fired), interim Tyrone Corbin and late-season hire George Karl.

Amid all that, somehow, second-year shooting guard Ben McLemore found ways to improve.

The Kansas product mostly struggled through his rookie campaign, but looked more comfortable in Year 2. McLemore again played in all 82 games for the Kings, but unlike the previous season, when his role changed a few times, the 22-year-old high-flyer started every game.

Accordingly, the 6-foot-5 guard showed improvements in his shooting percentages and scoring.


Perhaps the best news for McLemore? He finished the season in impressive fashion.

His April included 20-point performances against Utah, Oklahoma City and Denver, and he put up 24 points in Sacramento’s season finale, vs. the Los Angeles Lakers.

Karl has gone on record as saying no one on the team is untradeable, but if McLemore keeps showing new wrinkles, progress and improves defensively, he could be the kind of piece the Kings want to keep around for the long haul.

Just as impressive as his improvement on the court, though, have been his contributions to the people of Sacramento. The Kings named him the winner of their Oscar Robertson Triple-Double Award, given to the player who “exemplifies excellence on the court and in the community.”

Since joining the ranks of the best basketball players on the planet, McLemore has helped out not only in his NBA city, but also in his hometown of Wellston, Missouri.

“When I was growing up, my family didn’t have much, so it’s always been extremely important for me to give back and help wherever and whenever I can,” McLemore told the Kings’ website. “I cherish the opportunity to be a role model for young kids and to give back to Sacramento and the community in which I grew up in Missouri. I’m honored to receive this recognition named for an NBA legend and great humanitarian.”

McLemore also became one of the finalists for the league-wide Community Assist Award.

His nonprofit organization, All 4 Kids, provides meals for underserved and low-income youth and families in Wellston and surrounding communities.

Things weren’t easy for McLemore growing up, and it’s obvious he hasn’t forgotten that.

“Now it’s our time to provide for those who dream bold, too,” the young guard said.

Rock Chalk Ben - good to see any Jayhawk continue to do great things on and off the court!

Keep Rock Chalkin, BMac! Jayhawk Nation is cheering you on.