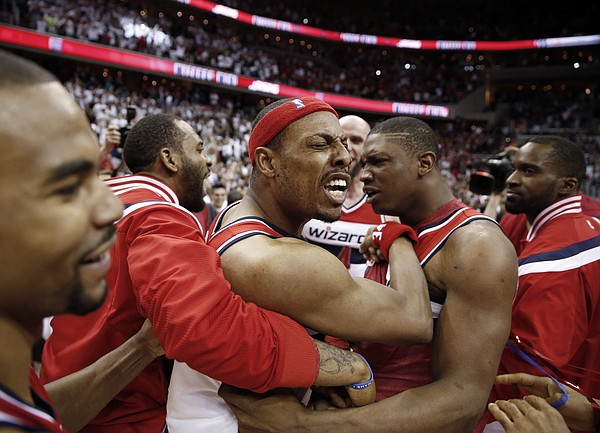 Washington Wizards forward Paul Pierce, in headband, celebrates with his teammates after Game 3 of the second round of the NBA basketball playoffs against the Atlanta Hawks, Saturday, May 9, 2015, in Washington. The Wizards won 103-101. (AP Photo/Alex Brandon)

From the man who brought you, “This is why they brought me here.” …

“The Truth” beat the buzzer — and Atlanta — Saturday night by banking in a contested game-winning jumper as time expired.

With the Hawks’ Kent Bazemore and Dennis Schroder defending Pierce, the 17-year veteran from Kansas got off as tough a crunch-time shot as you’ll find, and got the lucky bounce off the glass to give Washington a 2-1 lead in the second round of the NBA Playoffs.

ESPN reporter Chris Broussard asked Pierce afterward if he called bank on the absurdly difficult winner. The cagy forward thought about it a second before answering with his one-liner, “I called game,” and walking away.

Pierce, of course, made himself a household name with his playoff performances in Boston (see: his 2008 NBA Finals MVP award), before playing the past two seasons for Brooklyn and the Wizards.

Over the last 10 years, the only players with more than 1 game-winning buzzer-beater in the playoffs are LeBron James and Paul Pierce.

As much as trash-talking and bravado have become a part of Pierce’s NBA persona, he takes his role as a trusted clutch player seriously. He wrote about “Making the Big Shot” for The Players Tribune, a pro-athlete focused website for which he is a contributing editor.

“Whenever I’ve been put in a situation where the game is on the line and I know that the ball will be in my hands, I’ve always tried to visualize how I want everything to play out,” Pierce wrote. “Having a positive mindset helps me relax during high-pressure situations.

As many big moments as the 10-time all-star has played a part in through the years, Pierce singled out a regular-season game-winner from 2010 against New York as one of his most memorable.

The Celtics and Knicks had a nice little rivalry brewing, and New York’s fans didn’t mind constantly reminding Pierce about how little they thought of him.

“I remember that it was a tie game and we were in a timeout going over the play,” Pierce wrote for The Players Tribune. “All I could think about was breaking the heart of every Knicks fan in that building.”

Pierce said the play called in a last-second situation might ask him to do any number of things before the ball leaves his hands, but he finds ways to adjust when things inevitably break down and force him and his teammates to improvise.

“While I always picture the ball going in prior to the play, I don’t really know what I’m going to do beforehand to make that happen. Sports aren’t scripted,” Pierce pointed out. “The great players thrive on their instincts.”

Pierce continues to do that in Washington this postseason. The Wizards enter Monday’s Game 4 against the No. 1 seed in the Eastern Conference, Atlanta, with a 6-1 playoff record. Washington’s elder statesman is averaging 15.6 points, and 4.0 rebounds, hitting 51.4% of his shot attempts and 52.1% of his 3-pointers now that the lights are brighter and each moment is bigger.

“Whenever I win a game in that fashion,” Pierce shared of clutch heroics, “I feel like I’m going to hyperventilate. My adrenaline is through the roof and my heart is beating out of my chest. It is the ultimate basketball high.”