Fearlessness, desire to improve made Andrew Wiggins Rookie of the Year 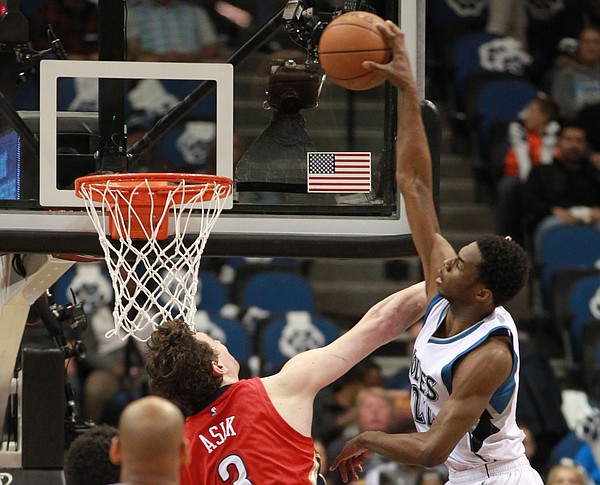 Sit down. Take a deep breath. Some shocking news came out Thursday.

While this honor was far from a no-brainer when the high-flying wing left Kansas and became the No. 1 pick in the 2014 draft, season-ending injuries suffered by No. 2 pick Jabari Parker and No. 3 pick (and Wiggins’ KU teammate) Joel Embiid left just a few contenders for Wiggins to outplay.

The Timberwolves finished 16-66, with the worst record in the Western Conference (second-worst in the league, to New York), but Wiggins’ play put him a cut above the rest of the competition.

None by Scott Howard-Cooper

The first Canadian and Timberwolf to win the award, and the first Jayhawk to do so since Wilt Chamberlain (1960), Wiggins’ 16.9 points per game led all rookies (in 25 games, Parker scored 12.3, finishing second).

The foregone conclusion now exists as fact. Wearing a navy tuxedo with a black bow tie, the ever-smiling Wiggins accepted his hardware at a press conference in Minneapolis, where the man who brought him to the Twin Cities from Cleveland, Timberwolves head coach and president of basketball operations Flip Saunders, couldn’t stop singing his praises. 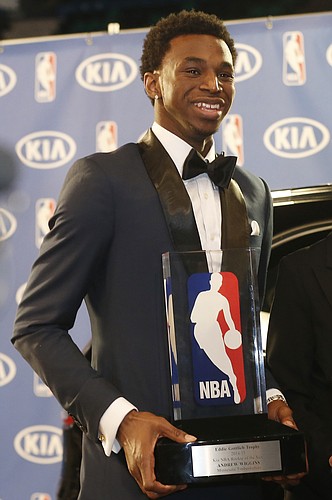 Minnesota Timberwolves' Andrew Wiggins holds his trophy at a news conference after he was named NBA basketball Rookie of the Year, Thursday, April 30, 2015, in Minneapolis. (AP Photo/Jim Mone)

Saunders traded former franchise player Kevin Love as part of a package to bring Wiggins to his team, and it turned out he got a “game-changing” player in return. The coach saw Wiggins’ maturity grow by the day as he gave the rookie, now 20 years old, enough responsibility that he could accept it and improve. Saunders said he stuck with that model throughout the season. What Wiggins’ boss saw in response was one of the most coachable players he’s ever been around.

“He loves to play the game,” Saunders said. “He’s a student of the game. He watches a lot of film. One of the positive things is when you look at him, he wants to get better.”

To the coach’s point, the league’s top rookie averaged 20.9 points, and got to the free-throw line 9.1 times a game during the last month of the season.

Andrew Wiggins is the 2014-15 Rookie of the Year. His avg of 16.9 PPG in his age-19 season puts him in elite company pic.twitter.com/MsEAdZrGuf

Even more impressive, Wiggins finished second in the entire league this season in minutes played (2,969), just behind MVP candidate James Harden (2,981). It didn’t take him long to emerge as one of the more difficult players to guard, either. The 6-foot-8 small forward finished sixth in the NBA in free-throw attempts (466). The guys ahead of him? Harden, Russell Westbrook, DeMarcus Cousins, LeBron James and DeAndre Jordan.

The youngster said he learned to love playing against The Association’s best.

The star-in-the-making speaks with his father, Mitchell, every day. The elder Wiggins played in the NBA, too, so he didn’t sugarcoat anything when they spoke about the pros and cons of the rookie’s game. Wiggins said he also inherited his drive from his pops.

“I’m not really scared of nobody,” the new face of the Timberwolves said, “no matter who I go up against.”

His personal turning point, Wiggins revealed, came when he played at Cleveland in December and scored 27 points against the team that drafted him and then shipped him away.

“Ever since then,” he said, “I feel like my game has really moved on. I got a lot better at certain things.”

Saunders recalled skeptics questioning Wiggins’ will to compete entering his first go-round in the NBA.

“I think he pretty much answered most of those critics,” the coach said, “and those questions.”

.@22wiggins becomes the first Canadian born athlete to win the 2014-15 #NBA Rookie of the Year! pic.twitter.com/f7Wvz1AqzI

None by NBA Canada

On a number of occasions during the press conference, Saunders and general manager Milt Newton, a self-described “fellow Kansas Jayhawker” who played for the 1988 NCAA Championship team, described Wiggins as Minnesota’s cornerstone. The young man who heard those expectations replied by saying he has a long way to go: “That’s just motivation to my ears.”

Asked about his next goal, Wiggins replied he had plenty. First off, he wants the T’wolves to have a better season next year. Making the playoffs is also on his list, as is becoming a better teammate and leader, and earning a spot in the All-Star game.

The way the Rookie of the Year sees it, he needs to spearhead an uprising for this franchise that has put so much trust in him, and his award is just a sign of things to come.

“It should bring a lot of hope to the future of the Minnesota Timberwolves,” Wiggins said.

That's another thing about Wiggins that wasn't mentioned in other commentary on this site, the level at which he improved over the course of the year in the NBA. There are some KU fans that say he underachieved here, should have done more, because of Stanford, etc, and wonder what held him back and whether it was Self's personality or system blah blah blah. They forget that the NBA season is 82 GAMES and that those games are 8 minutes longer! He started in all of them and averaged 36 minutes a game. That's about three college seasons worth of minutes against the best in the world. So, just going by game-time alone, he's like a NCAA senior already...

people around here love to suggest that a player should stay in college to develop his game, which is true of most NBA draft early entrants, but clearly wasn't true for Wiggins. It's definitely situational. Unfortunately these players don't know what team is going to acquire them at the time that they commit to the draft. But Minnesota clearly was willing to develop Wiggins by giving him huge minutes. Not every team can do that for a player. It would have been interesting to see how he might have progressed had he not been traded for Kevin Love. He wouldn't have played 36 mpg. And Mirotic likely would have won ROY. Likely the trade was a good thing for Wiggins to catapult his career and become the franchise. But time will tell if the TWolves actually become relevant over the coming years.