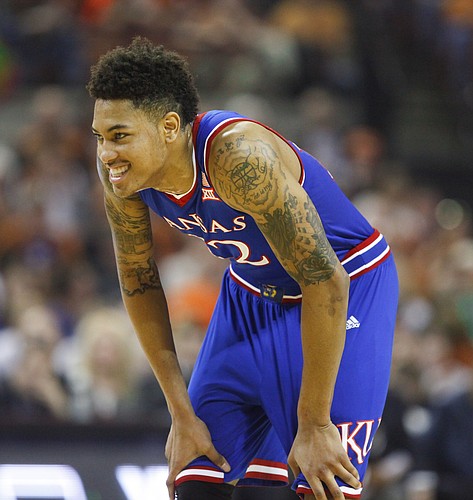 Kansas guard Kelly Oubre Jr. smiles after some hustle on the defensive end turned the ball over to the Jayhawks during the first half, Saturday, Jan. 24, 2015 at Frank Erwin Center in Austin, Texas. by Nick Krug

The Charlotte Hornets — owners of the No. 9 pick in the upcoming NBA Draft — had Kelly Oubre Jr. in for an individual workout Thursday. It marked the first such session for the one-and-done small forward from Kansas, who got to show off his athleticism, wingspan and potential for a team’s coaches without other potential draftees sharing the coveted spotlight.

Afterward, the lottery hopeful told Charlotte-area media he showed the Hornets everything he can do as a player.

“Hopefully they’re pleased. You know, I believe they are,” the ever-confident Oubre said in an interview posted on the Hornets’ website. “This is an organization I could see myself thriving in, as well. I can come in immediately and make an impact — whether just pushing my teammates, my future teammates, or being an impact on the court immediately. I’m just trying to maximize all my opportunities and be the best player I can be.”

Previously, Oubre worked out with other draftees-to-be for the Pacers and Suns, for example. The 6-foot-7, 200-pound wing thought he performed well under pressure, and told The Charlotte Observer’s Rick Bonnell he didn’t request to have a solo workout.

“I was informed I was going to be the only one on the court, and I didn’t argue,” Oubre said. “All eyes (were) on me. That felt good; I got to show out a little bit.”

"This was more like a game situation, being in a solo workout. All eyes on you." Kelly Oubre (Kansas) after workouts. pic.twitter.com/7nxEBQdoyn

Oubre considers himself mature for his age (19), and said his “supporting cast” — his parents, Kelly Oubre Sr. and Tonya Coleman Oubre — was behind him 100 percent when he decided to leave KU after one season of college basketball. As he has alluded to previously, Oubre said he thinks he can thrive in the NBA with his length (7-2 wingspan) and the ability to play more in open space at the next level.

“I have a lot of learning to do, and I’m willing to focus on basketball solely and dedicate myself to the game,” Oubre said. “I don’t have any other distractions. The game of basketball is everything to me now, and I’m committing the time to be the best player that I can be.”

The Hornets also posted video highlights from portions of Oubre’s workout on their team site.

Kelly Oubre of Kansas in for an early morning solo pre-draft workout in Charlotte https://t.co/Ik2b3EaxOf

• 3-point shooting from the left corner, left wing and top of the key

• ability to move from block to block in repetition, pick up a basketball on each side of the paint and jam it home

• conditioning (again), by running from sideline to sideline and finishing alley-oops in between

On Chad Ford’s list of top 100 draft prospects at ESPN.com, Oubre currently sits at No. 12.

The Hornets played shooting guard Gerald Henderson and small forward Michael Kidd-Gilchrist the most minutes per game at the wing positions this past season, and Kidd-Gilchrist and Jeff Taylor are the only two players on the current roster listed as small forwards. So if Oubre really did impress Charlotte — and the organization’s decision-makers think he can become a consistent 3-point shooting threat (the Hornets shot a league-worst 31.8% from downtown in 2014-15) — Oubre at No. 9 makes some sense.

Charlotte desperately needs some scoring/shooting, though, to compliment the interior scoring of Al Jefferson. Lance Stephenson didn’t make nearly the impact anticipated after the Hornets signed the former Pacer last summer. Oubre didn’t look like much of a go-to scorer or shooter at Kansas — 9.3 points, 34-for-95 from 3-point range. The Hornets will have to agree with the youngster about his ability to thrive in The Association to take an unproven scorer with a top-10 pick.