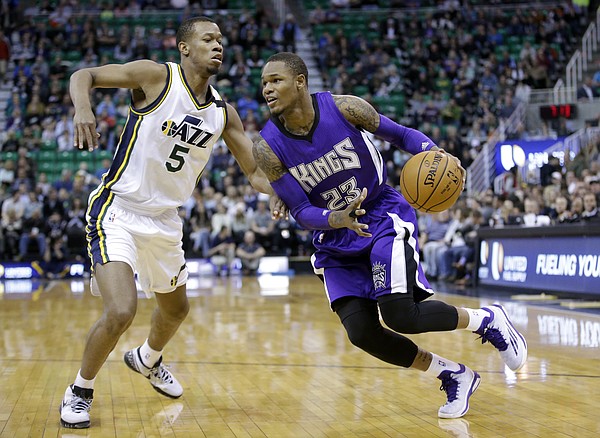 When you hear the name Ben McLemore and the word mixtape used together, you might assume a YouTube highlight reel awaits: 3-pointers, drives to the rim and dunks in transition.

However, SB Nation site Sactown Royalty reports McLemore has plans for a different type of mixtape this summer. The former Kansas shooting guard wants to release a mixtape of rap tracks.

Sacramento’s starting 2-guard already has two songs posted on YouTube — listen to them at SactownRoyalty.com (as long as you don’t mind lyrics that would come with a PARENTAL ADVISORY label).

McLemore told SB Nation’s Blake Ellington he began rapping while attending KU, in Lawrence, and he just considers it a hobby.

"I want people to hear my music to see what they think about it," McLemore said. "I've got some nice feedback."

The 6-foot-5 22-year-old certainly realizes basketball will take him farther than the rap game. He showed improvements in his second year in the league while also standing out as someone who gives back to the community.

I want to give a shout to @isgcamps for helping me out this week with my camp. It's been great the kids learned a lot, had a great time learning about the game of basketball. Also go follow @isgcamps and visit isgcamps.com to sign up for my upcoming camp in Lawrence, Kansas. #ISGCamps #benmclemore #SacramentoKings


So don’t wrongly assume his passion for hip-hop means he’s putting hoops on the back burner.

"This upcoming year, I want to make another leap," McLemore told SB Nation. "I'm going to work hard this summer, it's just the type of player I am."

McLemore, who began playing for new Kings coach George Karl late in this past season, also said he’s excited about what will be his third year in Sacramento.

"I think my skill set and his system collapse together. It fits perfect in what he's trying to do with this program,” he told SB Nation.

Karl's system and Ben's skillset "collapse" together? Ben't not much of a wordsmith for a rapper.