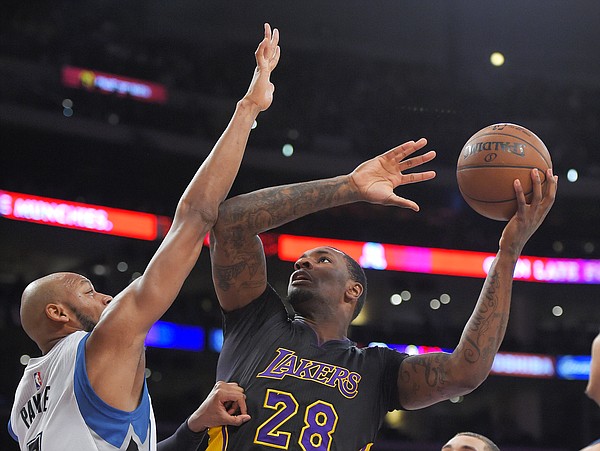 In the NBA, you constantly have to prove yourself, especially if you’re an un-drafted player on a non-guaranteed contract. Such is the life of Tarik Black.

You wouldn’t know it by listening to the former Kansas big man speak, but Black might not have nearly as large a role with the Los Angeles Lakers in his second season as he did as a rookie.

Listed at 6-foot-11 (but actually 6-9 in sneakers), Black started 27 games for the Lakers after being waived by Houston. The undersized center contributed 7.2 points, 6.3 rebounds and made 59.8% of his shot attempts in 21.1 minutes a game for an underwhelming L.A. team that finished the season 21-61.

As one of the NBA’s marquee franchises, the Lakers weren’t about to run it back with the same roster. And although they whiffed on big-name big men free agents such as LaMarcus Aldridge and Greg Monroe, they made less headline-grabbing moves by trading for center Roy Hibbert and signing power forward Brandon Bass. Throw in the return of power forward Julius Randle, who broke a leg in his NBA debut last season, and you’re looking at three guys likely to get minutes ahead of Black.

So why is Black so positive about his role with the franchise entering Summer League play? The gregarious big man said in an interview posted on the Lakers’ website he felt like a part of the team within a couple of weeks of arriving in L.A. — like he was supposed to be there.

The Lakers begin playing in the Las Vegas Summer League on Friday, where Black enters the showcase with a list of personal targets in terms of improvements.

“A lot of things last season with me was moving too fast,” Black said. “I have a lot of tools, a lot of things I can utilize there on the floor, but I was moving so fast and just so anxious that I was maybe throwing the ball away or making a move and I had a shot and I didn’t recognize it, because my head’s down and I’m just moving. So now I’m just trying to slow myself down.”

After having conversations with coach Byron Scott on the matter, Black thinks improving offensively will come by pacing himself, as well as investing some off-the-court time in watching video.

“To see yourself on film, I think it’s an underplayed thing nowadays in the game,” Black said. “We watch film on teams when we travel, but watching yourself is huge.”

Of course, Black didn’t mean watching his own highlights. Examining areas where he came up short in his first tour through the league will do him far more good. All the while, he plans on expanding his “bread and butter” plays, too, and constantly finding ways to improve his greatest skills.

“That’s gonna keep me at this level: my rebounding, my hustle plays, playing defense, things like that,” Black pointed out.

One facet that needs a lot of improvement, Black admitted, is his jump shot. Primarily an interior force his entire basketball life, he has spent a lot of time since the end of the season taking jumpers.

At the college and high school levels, Black always played center and never had a coach ask him to take jumpers, let alone work on them. Accordingly, he is happy to put in the time to become a more complete NBA player. 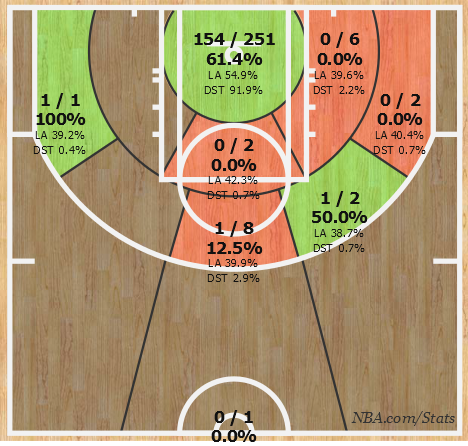 An overview of Tarik Black's rookie-year shot chart, via NBA.com/stats.

Honest with reporters about not just his development, but also adjusting to all that comes with professional basketball, Black said he had trouble at first determining the ideal approach to his offseason routine. After all, this is his first summer as an NBA player. A little over a year ago, he had pre-draft workouts through June. Before that, as Black put it, college players stayed on campus in the summer months, because coaches didn’t want them to leave and “you don’t have money to leave, so it’s a little bit different routine.”

Black, who has one season left on his contract for $845,059, understands he’ll have to maneuver through this offseason properly to make sure he enters training camp prepared for the 82-game grind. He said he returned to KU “like two days later,” after the Lakers’ season ended and went in the opposite direction of immediate rest.

“I was playing five-on-five as soon as I touched down off the plane,” Black said.

However, he kept hearing the same advice from people who know the league: get some rest. So Black tried to take about a month off to get rejuvenated.

“I want some longevity in my career,” Black explained. “And I know what you do now definitely affects you down the road, even though you might not feel it as much.”

For someone who has played all of 63 games in the NBA, Black sure talks like a veteran. It’s smart of him, too, to neither address the diminished role he may occupy next season, nor waste time worrying about it at this point. As he told reporters, the Lakers have “so much talent” it’s difficult to predict what they’ll ask of him or how much they’ll utilize him, particularly on offense.

“I’m not really tripping about that,” Black said. “Because I know I’m getting better. I’m working on it every day. When you get the chance to show it, that’s when the opportunity opens up.”

Once free agent agreements and trades from the past week become official, the Lakers’ frontcourt will feature Black, Hibbert, Bass, Randle, Ryan Kelly, Robert Sacre and rookie Larry Nance Jr. That’s a lot of big men. But the group could get less crowded, according to the L.A. Times, which reported the Lakers could trade Kelly or Sacre to make sure they have enough room under the salary cap to accommodate their offseason acquisitions.

Given Black’s cheap contract (by NBA standards, of course) and his attitude, it’s hard to imagine the Lakers getting rid of him. But anything could happen in the weeks and months to come.

Beginning this weekend at the Summer League, Black will just keep working, trying to prove that he can be trusted inside, even on offense.

“I’m gonna keep on playing my age and show that I’m getting better,” Black said.

It’s that approach that got him to the NBA, via the 2014 Summer League, to begin with, and it’s that mindset that will keep him around the league.