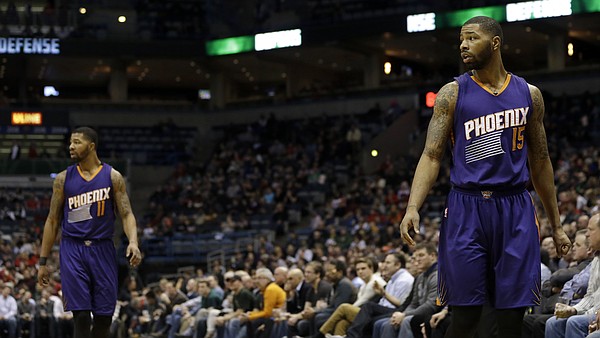 Twin brothers Marcus and Markieff Morris might have played their final NBA game as teammates.

Although Phoenix did the former Kansas stars a favor by trading for Marcus in 2013 and signing both of them to extensions prior to the 2014-15 season, with free agency in full swing, the Suns reportedly decided to split the twins up in order to chase the top available player.

Yahoo’s Adrian Wojnarowski, who breaks almost every NBA story out there, reported Thursday afternoon Phoenix agreed to move Marcus and two other Suns to Detroit for — of all things — a second-round draft pick in 2020. Obviously, that wasn’t the organization’s end game. Wojnarowski reported Phoenix agreed on the deal to clear cap space as it tries to sign power forward LaMarcus Aldridge.

Breaking up the Morris brothers likely has nothing to do with Marcus’s caught-on-TV shouting match with Suns coach Jeff Hornacek, but the twins’ alleged involvement in a felony aggravated assault case in Phoenix probably didn’t inspire the franchise to remain invested in the young forwards, who are 25 years old headed into their fifth season in the NBA.

Obviously, this move won’t sit well with the Morris twins (or the Morrii, if you prefer), and we’ll certainly hear more on that front once all the summer movement settles. In the meantime, Markieff expressed his shock via Twitter.

If he isn’t happy with Phoenix’s management, he may not have to worry about any awkward exchanges in the near future. Wojnarowski also reported the Suns could be working on another trade involving their leftover Morris.

Suns need to get off Markieff Morris/PJ Tucker in sign-and-trades or dumps to get closer to space needed for Chandler and Aldridge.

So try to keep up with the mayhem that is free agency season, and remain on the lookout for more Woj-bombs. Markieff could be moved to Dallas in the time it takes to type 140 characters.

Markieff, the ideal stretch-4 for the NBA, has experienced more success in the league than Marcus to date. But Marcus, who played both small forward and power forward with the Suns, has played in all but one game over the past two seasons, started 35 this past year and averaged 10.4 points and 4.8 rebounds in 25.2 minutes in what proved to be his final campaign with the Suns.

As of Thursday afternoon, the Pistons have Marcus, Danny Granger, lottery pick Stanley Johnson, Quincy Miller, Ersan Ilyasova and Anthony Tolliver as their forwards. So starting at the 3 or 4 spot wouldn’t be out of the question for Marcus in Detroit. Or he could become a valuable sixth man.

No doubt Marcus hates this business move right now, but it could actually benefit his career down the road if he makes the most of it. He’ll just have to find a new roommate.