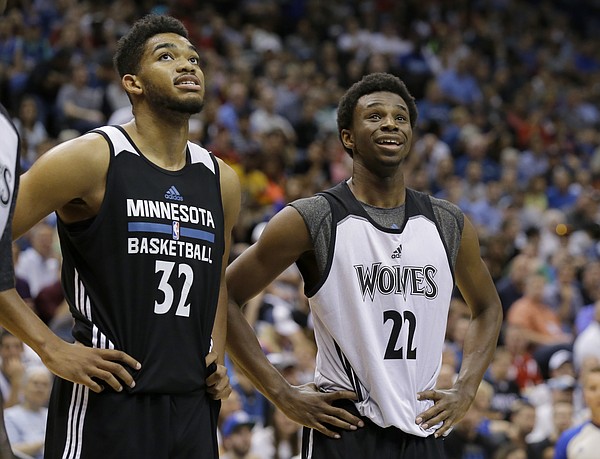 The Minnesota Timberwolves haven’t finished with a winning record in any of the previous 10 seasons, nor reached the NBA Playoffs since 2004.

This summer, however, only optimism — well, that and probably a lot of patience — surrounds a franchise that won just 19.5% of its games in the 2014-15 season.

Hope for the future springs in the Twin Cities, in part, because of reigning Rookie of the Year Andrew Wiggins’ presence. The promising 20-year-old who spent one college season at Kansas has become the face of the franchise. And in 2015 No. 1 pick Karl Anthony-Towns, out of Kentucky, Wiggins has another high-ceiling running mate to help carry the burden of one serious reclamation project.

During an interview with NBA TV this week in Las Vegas, Wiggins was asked if the Timberwolves are his team, so to speak.

“I feel like I’m a big part of the team. You can put it that way,” the modest 6-foot-8 rising star said.

With youngsters such as Wiggins, Towns, Zach Lavine, Ricky Rubio and Gorgui Dieng expected to carry Minnesota back to relevance— and beyond — in the coming years, the Canadian sensation already finds himself in somewhat of an influential role.

Luckily for him, the T’wolves just re-signed sage NBA veteran Kevin Garnett. One of the most competitive players in league history, Garnett can control the locker room and allow his apprentices to pick his brain and gain some wisdom.

“We’ve got to cherish the moments with him,” Wiggins said. “He’s a living legend.”

The Timberwolves would love if KG’s presence accelerates the development of its young troop of talent. In the meantime, Wiggins has spent his first NBA offseason trying to add some muscle onto his roughly 200-pound frame.

“I’ve been working out, trying to get prepared for next season,” he said in an interview posted on the T’wolves’ website. “It’ll be good to gain weight. I’m trying. I got a fast metabolism.”

As Wiggins told the Star-Tribune’s Jerry Zgoda, it’s been a busy summer for him. Last week, Wiggins played a major role in the opening ceremonies for the Pan-Am Games, in his native Canada. He accepted the torch from his mother, Marita Payne-Wiggins, and passed it on to Steve Nash.

Next month, Wiggins will play for Team Canada at an Olympic-qualifying event in Mexico.

“It’s definitely busy, but I’m prepared for it,” Wiggins said. “I’ve gotten a lot of rest.”

With names like Wiggins and Towns headlining Minnesota’s lineup, people won’t be sleeping on the Timberwolves for long. Wiggins knows it is up to him to keep evolving as a player. Once next season begins, that Rookie of the Year hardware will be old news.

“I think I can make a big improvement,” Wiggins said of his trajectory for Year 2. “I think I can improve in every area, whether it’s defensively or offensively.”

As anyone who has seen Wiggins’ freakish athleticism in person can attest, it is too early to put any limits on what the future holds for the 20-year-old. And that’s very good news for the downtrodden Timberwolves.

Maybe Wiggins could tutor Oubre a bit about humility.