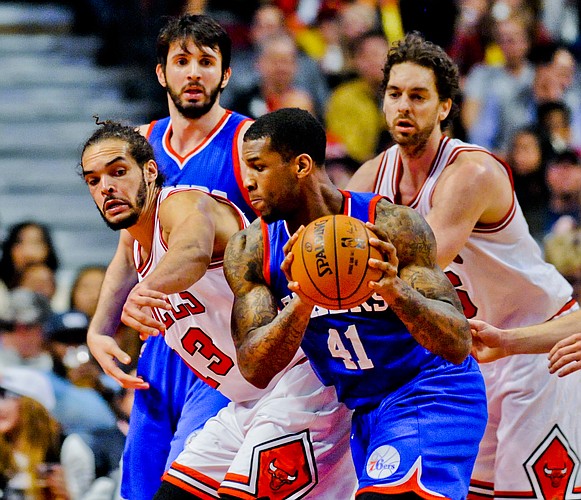 There are far bigger, landscape-changing names on the NBA’s open market this summer than Thomas Robinson. But it’s hard to come up with many free agents as desperate to find the right fit. Robinson needs to find a franchise where he belongs.

After leading Kansas to the 2012 national title game, Robinson entered the league as the No. 5 overall pick. Three years later, the 6-foot-10 forward has been traded three times and waived. Now, for the first time since picking KU, he gets to choose his next team.

An energetic big man who is only 24, Robinson performed rather well in limited minutes once Philadelphia claimed him off waivers late this past season: 8.8 points, 7.7 rebounds (2.8 offensive) in 18.5 minutes over 22 games.

Beginning with Sacramento, which drafted him, and continuing in Houston and Portland, Robinson either hasn’t impressed teams enough or got caught playing behind more effective veterans.

As he tries to find a franchise that both wants him and will use him effectively, Robinson told Grantland’s Jonathan Abrams he’s letting all the doubt about his potential fuel him.

“I can’t stand the politics of it,” Robinson said in the Grantland feature. “I lost all respect for why I thought I wanted to come to the NBA. I’m not here for the same things I had in mind when I got drafted or when I was a kid. My mind-set has completely changed.

“Outside a few handful of players in this league, other than that, you’re up for grabs. Anybody. So right now, I’m not playing for money no more. I’m not playing for love. I’m playing because I want my respect back. That’s pretty much my mind-set until I’m done.”

The Grantland piece provides much more insight from Robinson on the business side of the NBA and his ongoing struggle to establish himself as an important player, and goes into his relationship with his former KU teammates, Marcus and Markieff Morris, their mother’s role in Robinson’s life and much more.

With free agency just under way, Philadelphia has plenty of available money, but its three projected best players, Nerlens Noel, Jahlil Okafor and Joel Embiid, all play inside. So the 76ers seem unlikely to re-sign Robinson. The prevalent rumor is that Brooklyn wants to add him to its frontcourt.

Hearing Interest between #Nets and Thomas Robinson is mutual.

However, the Nets reportedly agreed to big deals with their own free agent bigs, Brook Lopez and Thad Young. So if they want to pick up Robinson, too, they don’t have much money to offer him without making some other moves.

If that’s OK with Robinson, and Brooklyn promises him playing time, he could decide to sign on for a one-year deal, showcase his abilities and become a free agent again next summer.

Then again, if Robinson wants the added security of a longer deal and more money, there could be plenty of other intriguing opportunities out there.

CBSSports.com’s Zach Harper compiled a definitive list of salary cap situations and team needs for the entire NBA this summer. Using that as a jumping off point, here are some other organizations that could use Robinson and afford to throw some bigger pay days his direction.

Boston has plenty of cap space and had only three noteworthy post players — Jared Sullinger, Tyler Zeller and Kelly Olynyk — under contract before reportedly reaching an agreement with Amir Johnson. Still, Danny Ainge always seems to be chasing down trades, so there is no guarantee Sullinger, Zeller or Olynyk will remain on the roster.

Detroit also has ample room to stay under the salary cap. The Pistons are expected to let Greg Monroe sign elsewhere, leaving them with Andre Drummond in the pivot and Ersan Ilyasova and Anthony Tolliver as their power forwards.

New York needs starting big men and backup big men. At this moment, No. 4 overall pick Kristaps Porzingis is the only post player set to be under contract next season. The Knicks are rumored to have interest in Monroe, David West and LaMarcus Aldridge. But if they strike out on a couple (or all three) of those guys, why not fill a need and inject some energy with Robinson?

Dallas has money to burn with Mark Cuban calling the shots, and the Mavericks desperately need some interior players, too. Cuban will chase all the marquee names available in free agency or via trade. Even if Dallas lands another post player, aging Dirk Nowitzki could use all the help he can get inside defensively and on the glass.

The Los Angeles Lakers hope they can lure Aldridge or make a deal for DeMarcus Cousins. If those ventures fail, they’ll need depth inside to go with Julius Randle and Tarik Black (Robert Sacre has a non-guaranteed deal).

Phoenix might be the most alluring destination for Robinson if the Suns are interested in him. No doubt, he would love reuniting with his #FOE brothers, the Morrii. But Phoenix reportedly reached a deal with Tyson Chandler and also has dreams of adding Aldridge. With Markieff, Alex Len and Chandler all in line for plenty of minutes, Robinson likely would need assurances of playing time to head to the desert.

Whether all — or any — of those teams want to add Robinson remains to be seen. Plus, new deals are popping up by the minute this time of year, so situations with every franchise remain in flux.

In the young power forward’s mind, he still expects to live up to his top-five-pick status and become an All-Star. One might say he considers himself a diamond in the rough.

“If it happens the wrong way, I know it’s my fault,” Robinson told Grantland. “I’m betting on myself right now.”

I thought that in a recent LJW article that characterized TRob as a "bust" was unfair.

Aldridge is probably going to end up in San Antonio replacing Splitter who SA traded to Atlanta today.

i see a trend with KU players (especially bigs) struggling in the NBA (exception of Morrii twins who seem to have found their niche). They all come with great confidence (or overconfidence in some cases) but can't seem to crack the rotation.

i wonder if a big part is the Big 12...our players just don't get challenged enough and we dominate the Big 12 each year and it gives them a false sense of confidence that they can play to that level in the NBA. If you think about all bigs under self, they have all exceeded expectations (except alexander) but couldn't translate the success into the NBA. so either these bigs are simply reaching their potential at KU and dominating over much lesser talent or they just aren't being prepared.

this is something Self needs to address..with the One and Done system taking off, this could be a major recruiting factor and can affect us very negatively