As the NBA showcases five Christmas Day games, Kansas basketball fans looking to mix in some Jayhawks with their holiday festivities will have a chance to catch a glimpse of as many as seven former KU players.

Here’s a rundown of ’Hawks in the NBA taking the court while most of the country takes the day off.

If you love veteran role players and stars from Roy Williams’ last years at KU, well, you better send the NBA a thank-you note for this present. Both Kirk Hinrich and Nick Collison will get some national air-time Christmas afternoon (1:30, ABC) when Hinrich’s Bulls play at Collison’s Thunder (though most promos for the game probably feature Derrick Rose, Jimmy Butler, Kevin Durant and Russell Westbrook). 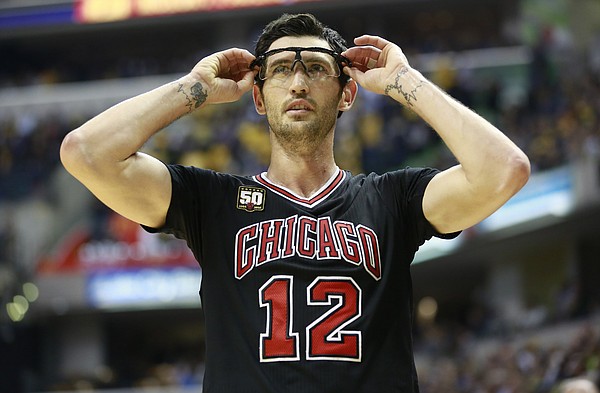 Now 34 years old, Hinrich plays a backup role for Chicago (15-11) and averages just 16.2 minutes a game. But this is his 11th season playing for the Bulls, the team that drafted him seventh overall in 2003. As pointed out recently by SI.com, the veteran 6-foot-4 guard now leads the franchise in career 3-pointers (1,040) and ranks third all-time in games played (730). The only Bulls who have played more games for Chicago are Michael Jordan and Scottie Pippen.

“The young guys, they’re joking all the time, ‘Did you play with Bill Cartwright?’” Hinrich told SI.com.

More of a facilitator and defender these days, Hinrich’s best game of the season so far came in November, when Rose was injured and he played 34 minutes. Hinrich scored 17 points and helped limit reigning MVP Steph Curry to 3-for-11 shooting.

“He’s a guy that goes out and does the little things,” first-year Chicago coach Fred Hoiberg said. “He organizes everything on both ends of the floor.” 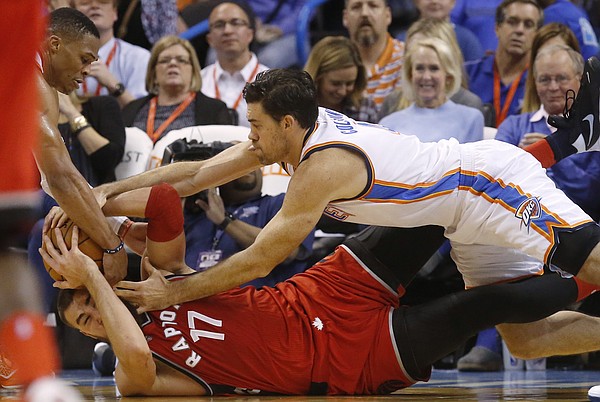 Hinrich’s old running mate at KU, Collison also plays a limited role (13.6 minutes) as a 35-year-old substitute big man for one of the NBA’s premier teams. And like Hinrich, the 6-10 forward ranks pretty high on some of Oklahoma City’s all-time lists.

Drafted by Seattle before the franchise relocated to OKC, Collison is third in games played (841), behind Fred Brown and Gary Payton. He ranks third in offensive rebounds (1,709) and total rebounds (4,566), behind Jack Sikma and Shawn Kemp. Collison also is third in field-goal percentage (.534), sixth in blocks (459) and ninth in minutes played (18,042).

As much of a mentor as a statistical contributor, Collison helps the Thunder (20-9) on and off the floor. He leads by example by defending, rebounding and taking charges.

Watch Nick Collison do what he does so well. https://t.co/7sKfbhK1ok #ThunderBasketball

“The teams that are really hard to guard in this league are the ones where you have a big threat rolling down the middle and you’re really put in a bind,” Collison told Oklahoma City’s website. “We’re trying to get in those situations on the offensive end as much as possible.” 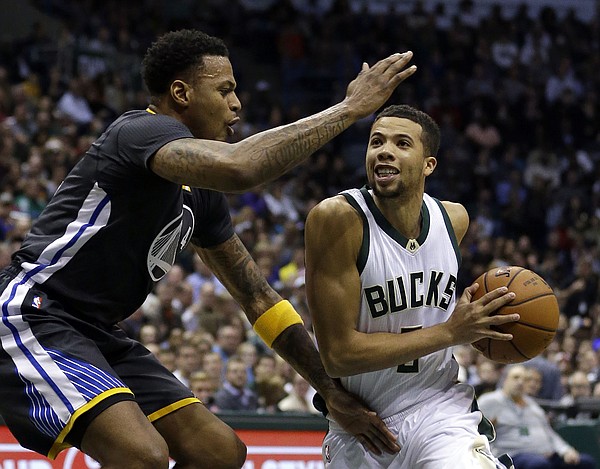 A member of the nearly unbeatable defending champion Warriors (27-1), Rush has played more this year (14.9 minutes, 5.2 points) than he has since the 2011-12 season. Golden State made the 30-year-old forward a starter when Harrison Barnes injured his ankle and became unavailable.

“I’ve been waiting for this opportunity to show that I can still shoot the ball and can still play at a high level,” Rush told the San Francisco Chronicle. “I feel so much better than I did last year — with my shot and just being able to move around the court.”

Rush’s best game to date came against Sacramento, when he nailed 4 of 5 from 3-point range and scored 16 points. In December, he is averaging 6.8 points and hitting 50 percent of his 3-pointers (14 of 28).

A major knee injury in 2012 derailed Rush’s career a bit, but now he finally appears to be back on track.

“It’s been up and down, especially these past two or three years,” Rush told the San Francisco Chronicle. “But now, everything is looking up. Things can’t get any better. I’m shooting the ball well, we’re the best team in the league, and we’re on the verge of trying to get another championship. I’m definitely in a great place right now.” 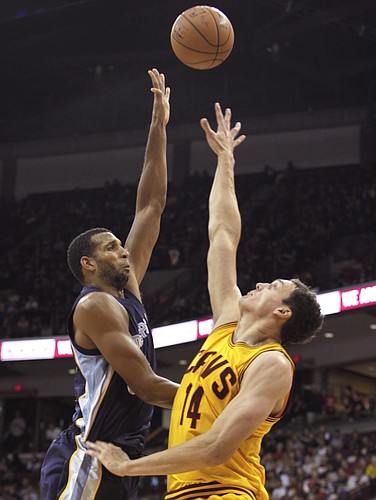 Kaun landed in a pretty good situation to start his NBA career. Cleveland, home of superstar LeBron James, is 19-7 and the prohibitive favorite in the Eastern Conference to return to the NBA Finals.

The Cavs don’t exactly need Kaun, a 30-year-old, 6-11 center that much, though. After spending most of his professional career overseas, Kaun has played in just seven games in his rookie season, with eight total points in those cameos (4.4 minutes).

"But, you know, his game is very simplistic,” Cavs coach David Blatt told Northeast Ohio Media Group before the season began, “so it's not like he has to do a lot of things that would require him to adjust. He just has to get used to the size and the length of the guys and the speed of the game."

This NBA nightcap in Los Angeles (9:30 p.m., ESPN) seems like it would provide the most bang for a KU fan’s buck, with three Jayhawks in the mix. 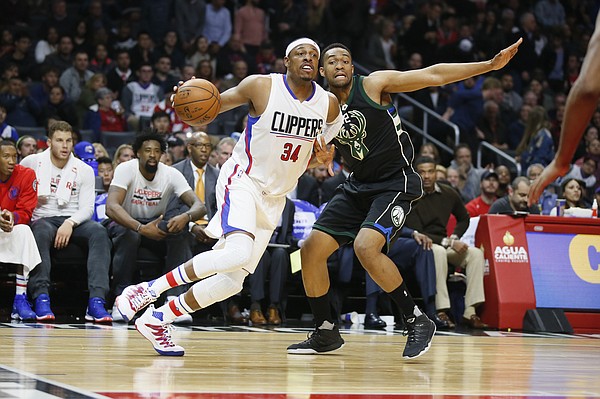 But even longtime NBA star Paul Pierce isn’t expected to participate all that much. The 38-year-old forward sat out the Clippers’ previous game to rest his sore back, and coach Doc Rivers said his veteran forward will be limited in the battle of Los Angeles.

On the other hand, another Jayhawk this week suddenly found himself in a more active role. 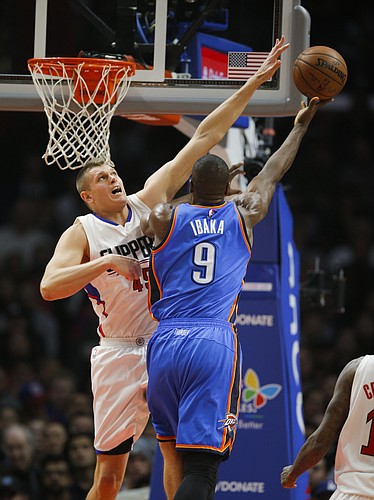 Reserve center Cole Aldrich, after not registering a single minute in 11 straight games, has played in each of the Clippers’ last two games and even played in the fourth quarter of a one-point loss to Oklahoma City earlier this week. Aldrich finished with five points, four rebounds and two blocks in 14 minutes.

"I think that was a prime example of being a star in your role and not trying to reach outside of that," Blake Griffin told the Los Angeles Times. “(Aldrich) just did what we need him to do and that's huge."

"If we play this way the rest of the year, we're going to win a lot of games," Aldrich told the L.A. Times. "We played with a lot of heart and a lot of enthusiasm and it was fun out there." 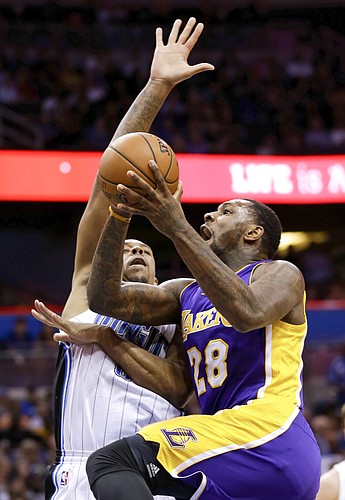 Meanwhile, the struggling Lakers (5-24) could use a similar spark from second-year big man Tarik Black. The 6-foot-9 center hasn’t played for the purple and gold since Nov. 24, but just got called back up from the team’s D-League affiliate on Wednesday.

Black put up 25 points and 14 rebounds in his final appearance with the D-Fenders. The 24-year-old big averaged 18.5 points and 11.8 rebounds in a four-game D-League stint, coming off an ankle injury.

Lakers coach Bryron Scott didn’t play Black Wednesday, while utilizing three other big men off the bench in a 35-point loss to the Thunder. So there is no guarantee Black will see the floor versus the Clippers.