Paul Pierce loving life as a veteran in NBA Playoffs 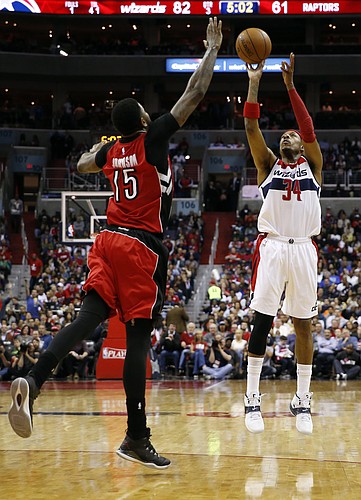 Washington Wizards forward Paul Pierce (34) shoots over Toronto Raptors forward Amir Johnson (15) in the second half of Game 4 in the first round of the NBA basketball playoffs, Sunday, April 26, 2015, in Washington. The Wizards won 125-94 to complete the first sweep of a seven-game series in club history, and advancing them to the second-round. (AP Photo/Alex Brandon)

There might not be many miles left on Paul Pierce’s NBA odometer.

So what’s a 17-year league veteran to do? Of late the former Kansas star has taken the route of soaking every ounce of enjoyment out of the playoffs and life in general.

First off, the 37-year-old can still take over for stretches on the court. With Pierce’s help, the Wizards (No. 5 seed in Eastern Conference) rolled through the first round by sweeping the Raptors (No. 4 seed) in four games.

The most critical trifecta came late in Game 3, with Washington only up three points and the Raptors still feeling like they had a chance to steal a victory on the road. Pierce calmly drained a dagger from the left wing.

“You know my famous saying, ‘That’s why they brought me here,’” Pierce told ESPN after the game, referencing his on-court rant in last season’s playoffs against Toronto, when he played for Brooklyn. “You know, I just wait for opportunities. I really feed off John (Wall) and Bradley (Beal) and these guys that get me going.”

“The Truth” had to feel good about that hot start to the postseason, because after the Wizards moved on to the conference semifinals, he continued to troll the Raptors’ fan base.

Washington, which wrapped up its opening-round series Sunday, now has the luxury of waiting to see who will advance between No. 1 seed Atlanta and No. 8 Brooklyn. The series currently stands at 2-2.

While the Hawks and Nets continue beating each other up, Pierce and his teammates can let their bodies recover and bond as a team. Monday night, Pierce and a few of the Wizards had choice seats for the Capitals’ Game 7 against the Islanders. So, of course, the outspoken old man of the group got into it.

All of this comes less than two weeks after the outspoken vet shared candid thoughts with ESPN.com’s Jackie MacMullan about some of his former teammates, including the Nets’ Deron Williams and former Celtic Ray Allen.

A reporter asked Pierce Tuesday about his approach these days, specifically on social media.

“I just look at it,” the veteran said in an interview posted at monumentalnetwork.com, “as good banter. That’s the word.”

“A lot of this stuff, I don’t pre-think it, man,” he added. You know, it just comes out naturally.”

“The Truth,” who became the Wizards’ hype man of sorts in his first season with the organization, summed up his personality and approach perfectly:

“Paul Pierce is just gonna be who Paul Pierce is gonna be. I’ll be myself. It wasn’t like they said, ‘Come in here and be a hype man or be a leader.’ I’m just being myself. If it helps our team, if it hurts our team, I’m just trying to be myself and see where that goes. I speak up. I tell the guys how I feel. I’m emotional. That’s just me being me, truthfully.”