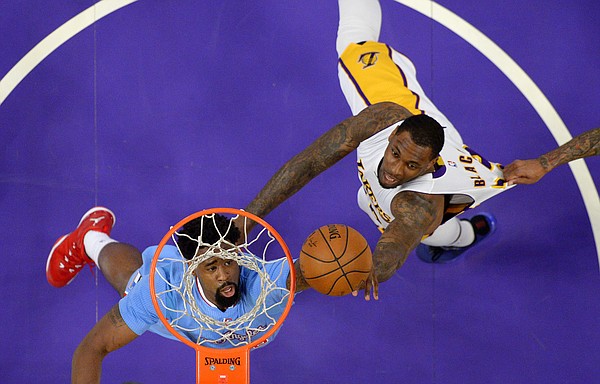 Given how the 2014 NBA Draft played out for Tarik Black, it’s hard to imagine his rookie season turning out any better than it did.

Sixty players — including two of his Kansas basketball teammates — heard their names called on draft night this past June, while Black went unpicked. The big man with little flash to his game would have to scrap his way into the professional ranks the hard way, by proving himself in the Summer League and earning a roster spot at a fall training camp.

And even though Houston, the organization that gave him a chance, ended up dumping him when veteran forward Josh Smith unexpectedly became available, that turned out just fine for Black.

A happy and productive member of the Los Angeles Lakers the final 38 games of his rookie season, Black said during his exit-interview press conference he went from a pick-setter and offensive rebounder in Houston to a situation that allowed him to flourish in L.A.

The lottery-bound Lakers, of course, needed him a lot more than the Rockets, the No. 2 seed in the Western Conference. Wearing the vaunted purple and gold, Black started 27 games and averaged 7.2 points, 6.3 rebounds and 0.6 blocks in 21.1 minutes a game, while making 58.9% of his field goals.

“I 100 percent feel like I found a home here,” Black said in an interview posted on the Lakers’ website. “It was a great opportunity and a great blessing.”

In Black’s own words, he was “not even a big name on the team” in his one season at KU, after transferring from Memphis. Once the entire league passed on him at the draft, he didn’t spend any time worrying about the guys who were selected and whether they were better than him. Instead, he successfully kept himself from over-analyzing any perceived misfortune. As it turned out, Black eventually landed in the right situation — and he admitted that doesn’t always happen for rookies.

“I’ve always felt that I had the potential,” the 23-year-old post player said, “and I had the talent that everyone else had.”

The Lakers gave Black a chance to make a name for himself, and upon his exit interview with coach Byron Scott and general manager Mitch Kupchak, he left encouraged by the praise he received.

According to Black, who played center for L.A. even though he says he is only 6-foot-9 while wearing sneakers (don’t trust those roster listings that put him at 6-11), the Lakers’ brass spoke highly of his potential. They said he can become an effective undersized presence in the paint, much like a Charles Barkley, for example. Black isn’t going to become an NBA MVP like Sir Charles, but the confident young man has high expectations for himself.

“I feel like I have the opportunity to be a great basketball player,” Black said. “How that’s been defined? Many greats have done many different things.”

Ideally, he’d like to play power forward in the league, instead of center. Black knows his rebounding is his biggest asset, and he wants to get to a point where he can defend an opposing 3, 4 or 5. He hopes his bulk, athleticism and footwork will allow him to turn this rookie-year success story into a long NBA career.

“I’m undersized as far as height goes,” he admitted, “but I’ve got some tools that I can play five, and that’s gonna make me more valuable at this level.”

Black’s contract with the Lakers isn’t guaranteed for the 2015-16 season, and his success these past few months isn’t going to stop him from continuing his development in the upcoming Summer League. After facing NBA big men for a season, he learned not only do they all have go-to post moves, they also know how to maneuver past screens and work on defense. All the greats, Black said, have perfected aspects of their games, and that’s what makes them unstoppable at times.

His summer plans also include returning to KU. Black said he is one course and a thesis away from completing his master’s degree in African-American studies. Not that he’s sweating the thesis. His mother used to work for the National Civil Rights Museum, in his hometown of Memphis.

“Whatever I decide to write it on,” Black shared, “I’m gonna knock it out. Trust me.”

Confidence carried him far in his first tour of the league. But black said faith proved huge for him, too, because so much of his life as a professional basketball player is out of his hands.

Still, there he sat at the season’s end, having accomplished more than the majority of the 60 players drafted last summer.

“A lot of those guys who were listed above me,” Black said, “I’m amongst them now.”

Thanks for writing this one, Mr. Smith. It's about time to get away from those boring recruiting talks that land us nothing but disappointment so far.

I had faith in Black. He's got that hunger in his eyes. He will continue his progress next season. LAkers is lucky to have picked Black. He's smart and proves he's got something to offer. It's so exciting to see him on the court with that energy and positive attitude.

Since our biggest deficiency is at the 5, maybe Tarik would like to go to the World Games.

He can't because he's in the NBA. Only amateurs can participate.

Good for Tarik. He should have gotten the Jayhawk Spirit Award when he was at KU. His head and his heart were in the right place. Continued success to him.

I was just curious, why is this page not listed in the main bball page? I had to dig staff's blogs list to find this article.

Tarik Black was pure class while at KU and continues to be that kind of person. He's the kind of person I really want to see succeed in life, whether it be with the NBA or some other career.

Tarik is eligible to play those games. Wiggins is going to play for Canada. I don't think Self will take any of our recent grads as he is going to use the games to build next year's team.

NBA CBA prohibits him from playing in those games. He's ineligible.

This is correct. No NBA players are playing in the World Games. The NBA doesn't let them.

The reply above about having to be an amateur has things wrong. Each of these international tournaments sets its own rules, and this one only has an age limit. I don't know how old Tarik will be on the first of the year, do you?

At any rate, HCBS isn't out to win in Seoul, but to get next year's team ready to win at AFH and around the BigXII as well as have a deep run in NCAA. What they do in June is just part of that getting ready.

Congratulations, Tarik. I was immediately impressed with his skills, attitude, and modesty. I am and will be a fan of his as long as he plays. KU was gifted with his talents, even though the transfer rule is controversial. Miss you and your motor, Tarik, and all the best success to you. Once a Jayhawk always a Jayhawk.