Veteran Paul Pierce turns it on for postseason opener 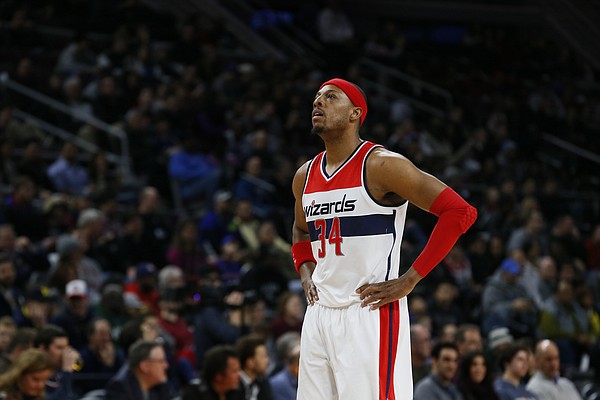 That Paul Pierce from the 2014-15 regular season — you know, the one that looked every day of 37 years old, with 17 seasons of NBA games continuing to break down his body. That was a hoax. A con man.

At least that’s what the former Kansas star would have us believe after scoring a game-high 20 points Saturday at Toronto, helping Washington take a 1-0 lead in the first round of the NBA Playoffs.

On the court for his post-game interview with ESPN, the sideline reporter pointed out Pierce hadn’t scored that much since an 18-point effort at Utah on March 18 — a month earlier.

Sure enough, Pierce only scored in double figures twice in his final 10 games.

“I was resting, I was resting for this moment right here,” Pierce responded, with a grin.

Now that the playoffs have arrived, maybe the real Paul Pierce will keep making appearances. “The Truth” lives for this stage. He now has 3,027 career postseason points — moving past Lakers great James Worthy to take 22nd place on the all-time NBA Playoffs scoring list.

Pierce, who said he felt good entering the postseason because coach Randy Wittman didn’t push him too hard down the stretch, spent some time as Washington’s stretch-4 to give Toronto issues in what turned out to be a 93-86 overtime road win for the Wizards.

He took over the game and scored half of his points in the second quarter, as Washington battled a raucous crowd that has gown to despise Pierce in particular after he knocked the Raptors out of the playoffs last season, when he played for Brooklyn.

“I don’t mind playing the role of underdog, villain or whatever you want to call it. I was just trying to help my team win, try to give us a mental edge,” Pierce said in Michael Lee’s writeup for The Washington Post. “If that’s the role I’m going to play, I just got to embrace it. It’s not that I’m a bad guy. Everybody knows I’m a good guy. I mean, off the court.”

He evidently didn’t mind a Toronto tabloid poking fun at his age, either, because he posted a photo of the back page graphic on his Instagram account.

Pierce, who opened OT by draining a 3-pointer that have D.C. the lead for good, said afterward the Raptors are down and the Wizards have to take advantage.

“We’re going to try to get greedy,” Pierce said in Jorge Catillo’s Washington Post story. “We didn’t come up here to try to get one game. We came up to take it one game at a time. We got Game 1, and now we’re trying to get Game 2.”

While Pierce hit 7 of 10 shots, 4 of 7 from deep and secured four rebounds, his teammate Drew Gooden, another former KU star, hauled in 10 rebounds, scored 6 points off the bench and helped protect the rim.

Drew Gooden defends the rim with a huge block on @espn! #NBARapidReplay http://t.co/lJWRDfIxNV

It never hurts to have savvy veterans this time of year — especially ones who saved their legs for the playoffs.

“As a unit, we’ve been here before,” the 33-year-old Gooden told The Washington Post. “It’s nothing new to us. We know it can be done. We got that first one from them and now we got to taste a little bit of blood.”

It's pretty cool watching The Truth go to work come playoff time. The first ballot HOFer still has it after 15+ years in the league!

Glad to see 'The Truth' do so well in the playoffs, and also Drew Goode , still making his presence felt. Two of my favorite players!