Joel Embiid wowing Sixers while working back into game shape

For the Philadelphia 76ers, next season can’t come soon enough.

As expected (and, let’s be honest, intended), 2014-15 has been a giant bust: Eighteen wins. Sixty-one losses. Three games left.

With another campaign of tanking coming to a close, what makes anyone within the Sixers organization optimistic next season will be any different? For one thing, they should finally have Joel Embiid in uniform and contributing.

In the past few days, interest in the rookie-to-be out of Kansas has grown. Still working his way back into shape after suffering a stress fracture in his right foot prior to being picked No. 3 in the NBA Draft, Embiid played two-on-two basketball for the first time earlier this week.

Bob Cooney of the Daily News reported the recovering young 7-footer also displayed his jump-shooting and post moves after a recent practice. Philly coach Brett Brown, of course, has seen far more. And he says Embiid has a long way to go.

"Physically, it's important that none of us get ahead of ourselves or expect something too quick, too soon, because that's not going to happen,” Brown said. “But when you see glimpses of his skill package, you can't help but say, 'Wow.' Just like we saw when we saw him play at Kansas. It's a two-way player and you're just seeing hints of some of the great players and all wrapped up into somebody that hasn't played basketball in a really long time.”

The work Embiid is putting in is impressing teammates, too. Fellow KU product Thomas Robinson said he would bet on the phenom from Cameroon soon becoming a productive NBA player.

"He's my teammate and a KU guy. He'll be great,” Robinson predicted. “I like that he's not a typical back-to-the-basket center. He is a little versatile. He can do a lot more than just stand in the post and shoot jumpers. He can handle the ball. I'm not saying he's going to do these things, but he has the package to use them if he has to. Later on in his career, once everything gets together, then he'll be a problem." 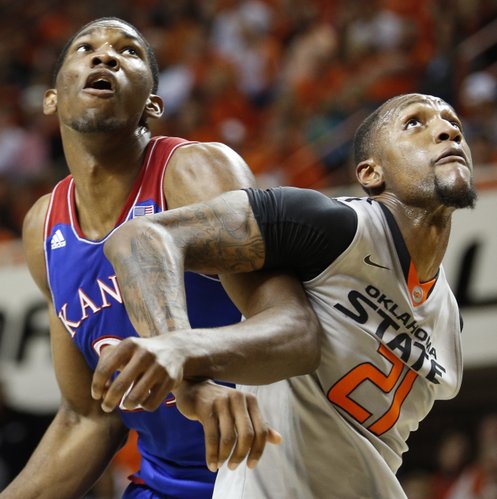 Kansas center Joel Embiid and Oklahoma State forward Kamari Murphy tangle for position during the first half on Saturday, March 1, 2014 at Gallagher-Iba Arena in Stillwater, Oklahoma. by Nick Krug

The next big step for the 21-year-old with monumental upside figured to be the NBA’s Summer League, his first chance to prove himself in live competition since his final game for the Jayhawks, a loss at Oklahoma State in which he had 13 points and 13 rebounds before re-injuring his back.

However, The Inquirer’s Marc Narducci reported the Sixers have yet to officially decide whether Embiid will play in the summer showcase for young, developing players and unaffiliated free agents.

Brown first wants to see the injury-plagued big man run up and down the court.

“When we get to that level,” the coach told The Inquirer, “then we are really cooking, and a hell of a lot closer than we are today to making better assessments and projecting him out as it relates to summer league."

Embiid, of course, can’t wait to be an active member of the 76ers. He recently suited up just to be on the floor for pre-game introductions.


Philadelphia plans to pair Embiid with 6-foot-11 rookie Nerlens Noel to form a dynamic, rim-protecting wall of “we dare you to come in here.” Noel, averaging 9.9 points, 8.1 rebounds and 1.9 blocks, told Sixers.com he expects his fellow big man to be a welcome, game-altering addition.

“He takes up a lot of space. He is always going to draw attention. His shooting ability is definitely there,” Noel said. “He practices shooting the three. I don't know how much he will be doing that, but just having that ability is going to open up a lot of things."

Inquirer beat writer Keith Pompey recently posted some clips of Embiid working out on his Instagram account, and he’s definitely working on his inside game, too.

The Sixers just hope they get a chance to see even more out of their potential franchise cornerstone. And soon.


Embiid dancing on the bench while wearing a suit only provides so much entertainment value.

Joel Embiid was the best overall talented player Bill Self has ever had. If he had been healthy we would have beat Stanford and made it to the Elite 8, possibly further. The guy is crazy talented and obviously works his butt off. If he can stay healthy, look for him to be the best KU player in the NBA since Paul Pierce.

Completely agree. If Embiid stays healthy, I think he'll be an all-star year after year and become one of the league's elite big men.

Watching Embiid's season highlights only reminds me of how much I absolutely hate the NBA.

Let's hope and pray he stays healthy. He is going to be exciting to watch. I may even watch an NBA game with him playing.

If the basketball thing doesn't work out, looks like he has some nice dance moves that will work nice with the cheerleaders!

Just for fun...Let's say the Joel stayed. He would of been out this year with injury. But, just picture KU next year with Jojo in the middle.

He took the money and ran. Not a KU guy. He's a OAD product.

Randy, that's pathetic and you're not a true Jayhawk fan.

I realize that Joel should have checked with you first before deciding to be the number THREE PICK IN THE DRAFT, but he decided to do what was right for himself. It's so easy for any of us to sit back and say players should continue to play for nothing (oh, I'm sorry, for a scholarship) and turn down millions, but who's to say we wouldn't do the same thing.

Joel will always be a Jayhawk and a "KU guy." As for you? I'm not so sure.

Len, couldn't agree more and I'm sure Randy would have turned down the same opportunity and money and thus been a 'true' Jayhawk......yeah right!