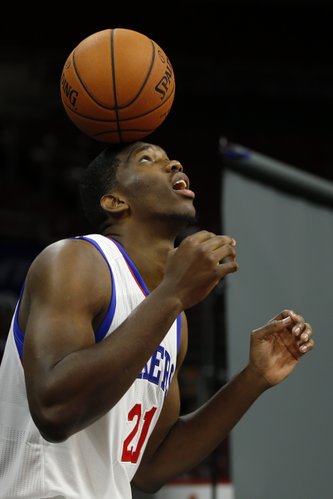 Considering how much of a grind the 82-game regular season has to be for NBA players, you can’t blame the guys for enjoying the preseason goof-off spectacle that is NBA media days.

Players surely take their interview responsibilities seriously enough, but when it comes time to mean-mug or bring some absurdity to photo and video shoots, they happily oblige.

Believe it or not, it’s actually training camp time in The Association, so the past few days have been light-heartedly busy for most of the former Kansas University players lucky enough to call the NBA home.

Some get to enjoy it a little more than others, as you can see in our social media roundup from the festivities.

None by charlie widdoes

Mario Chalmers strolls in the joint with the I'm-stepping-out-of-LeBron's-shadow swag pic.twitter.com/TiTH6miXoS

None by Josh Baumgard

Photographer: "You're not smiling." @JoelEmbiid: "This is my smile." - w/ @NerlensNoel3 & @MCW1 at #Sixers media day. pic.twitter.com/cGz8HDVIcH

None by Jason Wolf

None by Brian Cassella

Nick Collison @ #ThunderMediaDay "Part of my job is to help try to make the team better, help the young guys." pic.twitter.com/CPis4kdDQH

None by Lisa Gonzales

None by Golden St. Warriors

None by Twolves CR

Minnesota had an open practice for Timberwolves fans to watch following its media day, nicknaming the fun: Dunks After Dark.

Wiggins delivered a few throw-downs to help it live up to its name.