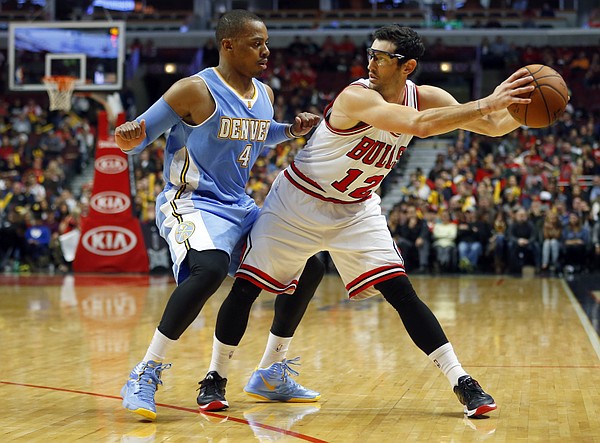 Kirk Hinrich might have one of the cushiest jobs in the NBA right now.

Chicago brought him back on a two-year contract with a player option for 2015-16 and all the league vet has to do is come in off the bench and keep the Bulls’ machine rolling along.

Even when Derrick Rose missed the bulk of the previous two seasons, Chicago made the playoffs and earned a reputation as one of the stingiest teams in the league. Now Rose is back, the Bulls’ roster is stacked and the words “Eastern Conference champs” are starting to swirl in The Windy City.

Hinrich, trusted by coach Tom Thibodeau and beloved by the organization for which he has played nine of his previous 11 seasons, will mix and match in the backcourt with Rose, Jimmy Butler and Aaron Brooks — all of whose jobs figure to be made way easier by the frontcourt power/skill of Pau Gasol, Joakim Noah, Taj Gibson and rookie Nikola Mirotic. Not to mention lottery pick Doug McDermott.

The Chicago Tribune’s K.C. Johnson wrote this week about what Hinrich brings to one of the NBA’s projected top teams: stability.

He could start the Bulls’ season opener if Butler (thumb injury) can’t play at New York Wednesday night. And, obviously, Hinrich is excited about the damage Chicago is capable of this season.

"Cleveland is going to be really good," Hinrich told the Tribune. "I think we can be real good too. We have a lot of good new pieces. The core that we have back has proven to be solid. And Derrick looks great.

"The window may be closing for me and I want to keep it open as long as I can. I want to give all I've got but at the same time enjoy it."

Hinrich at least proved he can occasionally bust that window wide open during the preseason. He nailed 11 of 14 shots and scored 26 points Oct. 19 versus Charlotte.

You can imagine what kind of “what-the?” responses showed up on Twitter after that “Captain Kirk” performance.

It turns out that's Ray Allen in a Kirk Hinrich mask as Allen is working on Mission Impossible 5. Hinrich now with 26 on 11 of 13

None by Sam Smith

Occasional blasts of offense, mixed with constant professionalism and the kind of non-highlight plays that have kept him around in Chicago: steals, defense, floor burns, annoying the guys he guards, etc.

Also, don’t be surprised when Hinrich and the Bulls (OK, Rose, Noah, Gasol and the Bulls, who also have Hinrich on their team) make a deep playoff run. Does Chicago have enough to get past LeBron James and his Cleveland Cavaliers in the East? We’ve got plenty of basketball ahead of us to figure that part out.